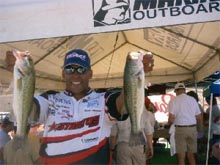 The fishing all week was terrible. Lake Mead is the lowest I have ever seen it. There is no Muddy; the Virgin is pretty much non-existent. So needless to say pre fish was pretty much like learning a new lake. But like I always say when it is tough it is tough for everyone and me personally I prefer it tough. That way usually the people who do their homework shine. I was pre fishing with my buddy Brett "Night, Night" Hite. We started just running and gunning throwing our favorite search baits, which for me on Lake Mead, is the Excalibur bone colored spook, and a Citrus colored fat free shad. I like to go back and forth between top water and what I call underwater reaction bait. That way I feel I got my bases covered and when the situation presents itself I throw a Riverside ½ ounce jig. Of course we have all of are hooks bent. The one thing I have learned from fishing with the pros is that the top ones all bend or cover their hooks for pre fish. I can’t tell you how many times I hear people talking about the fish they are sticking in pre fish and then when it comes to tournament day they blank. It seems like common sense to me and I would much rather be bragging about the fish I caught in the tournament then in pre fish. The strikes were far and few between. However after 3 days of fishing hard we had put together a pattern we were confident with. We found that the birds or "Fellas" as we like to call them were key. Grass was also a key element. We found that if we found a cove with the "Fellas" and grass, there were fish. They seemed to be staying pretty consistently at the backs of the coves in very shallow water, sometimes as shallow as a couple of inches. There was a brief top water and crank bite first thing. However, I was having more success with a Rebel Pop-R Purple Shad and a Heddon Torpedo Clear. Then my usual weapon, the Excalibur Spook. When that shut off I was switching to the drop shot. I was drop shotting a Yum Rib worm 4" Plum with a 12" leader, 1/8 ounce weight and using a very light line. I was using 6lb. Test. I wasn’t worried about breaking off even though it was the U.S. Open because I have found that the Excalibur Silver Thread is very strong. Of course we must not forget the Yum. I have got to the point where I put yum on everything even my hard baits. I spray it on my hands as well. I really believe Yum makes a difference; my favorite is the Shad scent. Well with my homework done there was nothing left to do but wait. My goal is to get a limit everyday. I feel with the bite as hard as it is if I can get a limit everyday I will be in the money. If I can get lucky and get a kicker, all the better.

The bite was tough as expected. I got one first thing in the morning on the crank and followed with 2 on the drop. My pro also got 2 on the drop and that was all she wrote. We fished hard all day 5 bites was all we could get for just over 6 lbs.

We went for a run past Temple Bar. It took us about 45 minutes to get there. As we pulled up I fired on a couple of boils with my Pop r. They were nothing but Stripers. Third cast was a Bass right on the shore in the back like I found them in pre fish. I got a couple more but they were shorts. Then I boated # 2 on the Excalibur Spook. My pro boated a couple on the drop shot. Then it was a while before we got bit and then bam I got fish # 5 on a drop shot. We fished hard all day looking for a kicker. We got several shorts on the drop. Then it happened right at the back of a cove in about 2 inches of water I fired my Pop r and a toad blew up on it but missed it. I quickly grabbed my Texas rig and threw a 5" Yum Shakin’ Worm, watermelon red flake on Mr. bass, unfortunately it wasn’t meant to be. There was nothing we could do but watch as this toad swam right by the boat and out of the cove. We even pulled off for a couple hours and snuck back in hoping that we would get a second chance, but Mr. Bass had other plans. We had a long run so we headed for the weigh in, we hit a couple spots on the way in but that was all she wrote. The five fish weighed just over a whopping 5 and half pounds.

Well it was 12 pm and we were yet to have a bite. We hadn’t even seen a boil, no "fellas" nothing. I suggested we drive around until we found the "fellas." As we were driving I was looking up in the sky and away in the distance I could see these small "fellas" circling and then diving down out of view. I said let’s head for those birds. As we got closer we saw that they were in a cove. As we pulled into the cove I saw them. I jumped on the deck and thanks to my Kaenon Polarized glasses I could see well in the water and there it was, the grass. As I grabbed my drop shot rig and said this is it, my pro was working a top water bait. I had three casts and three fish then my pro got one on a Torpedo. Then I broke one off, my fault I knew better, and I should have retied. That was the first mistake I made all tournament but it was a big one, you don’t want to make any mistake in a tournament this tough. One thing I learned from going out with pros like Tommy Biffle, Tim Horton and David Walker is they don’t harp on a missed fish or a mistake they just refocus and get back on track. So that’s what I did I retied and quickly got back in the groove. I noticed that the bites had been coming on the backsides of grass clumps. So I started to key on that. As I was reeling in and getting ready to recast I noticed I had a follower I quickly picked up my Texas rig and fired on the fish and this time he took it. I set the hook and boated #5. I breathed a sigh of relief and said "Thank You Jesus!" That was all the day wrote and we headed for the weigh in. I had done what I set out to do, get a limit everyday, and I was right it was good enough to finish 18th out of 169 and get a check. It was a tough tournament but I knew that going in and I was very happy with how things went. As always, I want to thank my Lord a Savior Jesus .As well as my sponsors Evinrude, Kaenon, Kinami, Kinesys, Phenix, Lowrance, Pradco, Stealth and Stratos for all their support.