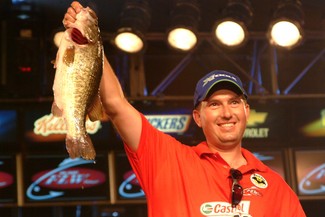 I don't know about you but when I buy something I want to get the best bang for my buck. I check out all the different manufactures and the different models. I compare both prices and features. I make sure I know as much as I can about everything currently available on the market. This way I can make an educated decision when I make my choice. When it comes to being a co-angler consumer on the west coast in 2007 the FLW National Guard Western Division tournaments are definitely providing us with a far superior product.

Maybe you have been thinking about fishing a big time tournament with stellar paybacks and nationally known professionals but did not want to travel back East. Possibly you are looking towards a professional fishing future and want to get your feet wet before taking the plunge. Well, fellow western co-anglers/non-boaters what are you waiting for? If you take a hard look at the pro/am style tournaments being offered in the West for 2007 you will see one tournament trail leaving the rest far behind in its (Ranger) boat wake. I am of course talking about the FLW Series National Guard Western Division.

Let’s start off looking at the best co-angler payback out there? Ok, ok, the FLW Strens have a better co-angler payback as long as you own a 2000 or newer Ranger boat but what if you don't? If you take a close look at the FLW Series National Guard Western Division co-angler payback you will see it is smoking! These tournaments cost 700 dollars each as a co-angler. With a full field of 200 co-anglers FLW is bringing in 140,000 dollars in entry fees. What's the payback you ask? How about 145,000 dollars! That's 103 percent of the entry fees! This does not include the 5,000 dollars given with the Ranger incentive program or the 300 dollars paid for big bass each day!

Oh, you want a championship too? Well, come in the top 30 after 4 tournaments in the west and you will be going to the East/West Series fish off. Granted this doesn't give a great monetary payback but all you need to do is beat 30 out of 60 other co-anglers and you advance to the 2008 Forrest Wood Cup. Take a look at the 2007 Forrest Wood Cup and then attempt to show me another championship where co-anglers have a better payback?

You want more reasons beside payback?
How about glitz and glamour? From the very start of their tournaments FLW treats the co-anglers great. They truly want us there and it shows. From the registration banquets they have before the partner pairing to Chris Jones giving you an opportunity to talk when you come on stage to weigh your fish. And if make it to the Forrest Wood Championship you will experience the best show a co-angler gets to be involved in. From police escorts to the launch ramp and weigh-ins at a stadium type stage to the family fun zone and sponsor booths it is something you and your family will never forget.

Want publicity and fame too? I don’t know of any other organization that showcases their co-anglers more in print, Internet, and television media than FLW Outdoors.

Are you thinking about fishing as a co-angler in 2007 to learn? Well, just think about what you will learn while you share a boat with the professionals who are fishing the FLW Series. If gaining the most knowledge about the little green fish we chase is your goal then these are the tournaments you better sign up for.

Think about this. Does someone with a Masters degree in a certain subject usually have more knowledge than a person with an AA degree in the same field? Who do you think has more experience and expertise? Who do you have the best opportunity to learn the most from?

The same can be said about the professionals fishing the FLW Series National Guard Western Division compared to the professionals who fish the other less expensive west coast tournaments. Your typical weekend club or team circuit guys make up a larger percentage of the "pros" fishing the other west coast pro/ams. They have the boat, money, and time but usually not as much fishing "education". The FLW Series will have a bigger percentage of "full time" professionals who, for the most part, have a much higher fishing "education".

Most of the weekend club or team circuit guys with a boat are not going to plunk down FLW Series pro entry fee to fish. Could you still learn something from them? The answer is probably "yes". Are you more likely to learn considerably more from a professional fishing the FLW Series? That answer is a most definite "YES"!

Did I hear someone say the “pros” are more helpful towards the co-angler in the other west coast circuits because those tournaments are usually shared weight? That is a load of garbage! I have fished both the shared and non-shared weight tournaments as co-angler. What I have found is it doesn’t matter what type of tournament the professionals are fishing they treat their co-anglers the same way. With that in mind I know I am going to learn a lot more from a “true” professional fisherman than a weekend warrior.

Just like buying a cheaper and inferior product in other aspects of our lives the same can be said about choosing which west coast tournaments to fish as a co-angler. If you want the best co-angler tournament product offered in the west in 2007 then you better sign up for the FLW Series National Guard Western Division.

If we choose not to show our support of these awesome tournaments they may not come back out west in the future. If that happens we will only have ourselves to blame.