Nestled in the southernmost end of California’s majestic and rugged Sierra Nevada mountain range at the headwaters of one of the country’s most treacherous whitewater rivers, lies a uniquely beautiful lake that has pretty much seen it all over the past half century. The lake is, of course, Lake Isabella.

Lake Isabella once laid claim to the heaviest 10-fish largemouth bass limit ever posted, a limit that exceeded 110 pounds. It also still has a precarious hold of the 23rd spot on the all-time Top-25 largest bass ever caught list with its lake record 18 pound 15 ounce bass caught by Keith Harper in April of 1984. But like most trophy bass lakes of the 80’s, less than scrupulous World Record bass seekers over harvested this once prolific big bass lake and it, much like Lake Hodges in San Diego County, all but fell off the map as trophy bass lakes. And while an occasional report of a “good ‘un” still pops up from time to time, “Izy” (as it is affectionately call by locals) has pretty much fallen off the list of potential World Record bass lakes and into obscurity. However, a recent phenomenon occurred at Lake Isabella which very well may lead to its resurrection as a world class lake, but for an entirely different reason.

On Thursday, March 10, 2005, veteran Bakersfield bass angler Jay Rich was on Lake Isabella “fun fishing” (as us tournament anglers like to call it when we’re not competing in or pre-fishing for a tournament) when he hooked into and landed a fish that, to this point, wasn’t even sought after at Lake Isabella. While tossing a spinnerbait, Rich connected with a huge smallmouth bass that tipped his “conservative” Cul-M-Rite XL scale at 5.75 pounds. 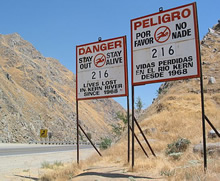 While Rich’s huge Lake Isabella smallmouth catch is a bit of a surprise, the legendary Kern River from which it flows has long been known for its outstanding smallmouth bass fishing. Those driving up the steep Kern River canyon from Bakersfield towards Lake Isabella are forever greeted by a very sobering warning sign that reports the number of lives lost to the occasional Class-5 rated Kern River. However, when it becomes more docile, anglers are sometimes rewarded with 50 plus smallmouth bass days from the Kern’s steep rocky banks and deep pools.

Because Rich released his beautiful Lake Isabella smallmouth bass shortly after weighing and photographing it, his prize catch will not be certified (or even acknowledged) by California Department of Fish and Game officials as a lake record. However, his 5.75 pound smallie is now the credible standard to beat for anyone seeking this title.