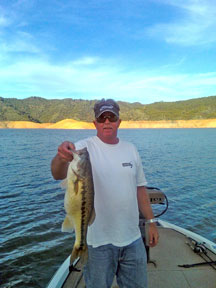 Late summer is even worse as the temps increase, water and air, making it tough on the Bass and fisherman/woman. I have learned over the last 30 years of chasing bass ,that the fish are fairly easy to figure out - in a way to get very close to what they may be thinking, if you just try to give it some of your own rational thought.

For instance, if it were 110 degrees outside most don't have the energy to be outside doing much of anything. However if you're inside an air-conditioned room just hanging out relaxing you're more likely ready to reach out and grab a snack, or at least under the misters at the lake on the back deck of a houseboat, then maybe a snack would sound good in the heat. This leads me to my point of looking for a place that would likely be a cool comfort zone for a big bass that is an easy place to grab a snack or a meal with little stress.

The funny thing is, the big fish have made their living at this for years and know right where to go time after time. All you have to do is figure that out and you got ‘em.

The other part of the puzzle is, most would agree that the highest percentage of big fish live in the top 5 feet of water or less most of the time but especially in the summer. Once water temps are 70 plus and in many case 80 plus the oxygen content becomes very low.

Places like Clear Lake can be deadly for bass in shallow areas during the summer because the oxygen gets low. The phenomenon of algae blooms happen which suck the oxygen out of the water so quickly that it can drop the level so low it will kill all the fish in that area within minutes. I know. I have watched entire slough’s and bay’s oxygen level drop to deadly levels several times. It was very bizarre to see fish dying everywhere where 1/2 hour before I just caught several fish in the same area.

So the other side of that story is, as the wind blows or the evening approaches, the cooling of the surface sucks the oxygen right back into the water. That's why night fishing in the summer is often better. However the depth of that cooling depends on how long it remains cool. Usually short lived in the summer, this is why shallow fish will move around always looking for shade or wind in the summer.

I wanted to explain this a little to you so it will make sense as to where I have been successful in finding big bass in the summer.

A long time ago I used to see big fish in the summer under flat docks at Clear Lake, it was pretty common comfort zone for them. Just a habit I think that stems from being young and protecting themselves from birds attacking from overhead or any other predators overhead. But most of the time when you see them they are on the back side of the dock where the most shade is located.

What I learned from that was to put a pattern together of finding big bass super shallow with tons of shade under the dock. It’s way cooler thus far, more oxygen during the heat of the day and even further they want to feel very secure and hidden so I looked for flat docks with walls on the back side.

So here is what you do, rig up a Texas rig bait with at least a 3/8 sinker and pitch the bait very quietly over the dock between the wall and the dock. Then thumb the bait as soon as it clears the dock. You don’t want it to hit the water and make a big splash. You want to have complete control of your bait. Now slowly lower it down until your bait just touches the surface. (YOU CAN'T SEE IT YA JUST HAVE TO KNOW IT OR FEEL IT). Then just hold it there and be very patient for a minute or so. Usually the bass sees a very easy target and is very relaxed and just sucks it in like a piece of spaghetti. When this happens you will feel a slight pull so just lean into it with a little slack then hammer him. By the way, I used to do this with 25 lb big game and bounce 5 to 10 pounders over the dock with the side of the boat always rubbing the dock so once on the dock you just drag him right in the boat with you partner holding the net in case he comes unbuttoned, then your partner has to get him like a butterfly in a net on the dock.

Man, that is some exciting stuff that happens so violently and quickly it's a total rush.

Ok the next way I use to get ‘em is in trees .Places like Rodman at Clear Lake or where ever you find trees. But remember to keep in mind oxygen, the cooler the better and heavy cover for easy picken’s for the big bass. So you find some trees with weeds wrapped around the branches or moss and shade if possible, though sometime the shade from the weeds or moss is enough especially if you have a surface breeze sweeping the surface.

Okay, I’m ready to make a cast right now, that is a deadly scenario. But wait, the secret - pitch to the back side over a branch and do not let the bait hit the water and keep your boat as far away as possible. Keep quiet, they are smart and did not get big by being dumb. So pitch over the limb and slowly lower the bait about an inch or so in the dense spot. Sometimes you have to adjust to a heavier weight depending on the cover you're fishing and remain still for at least a minute. I know it's painful but it pays off big. I have won many tournaments this way.

If you do not have a wall or weed or moss providing a very dense area in the zone just find the darkest spot in the tree and lower the bait just out of site and just hold it. Sometimes they want a very mild shake but not much. Remember they don't want any stress, because it takes energy and oxygen which they have little of during the heat of the day in the summer. Willow trees at Lake Shasta with spotted bass, it's the same approach - always hang your bait softly over a limb then lower it into the zone.

Ok this next way is also very exciting. Rocks, steep rocks, are key. You must find steep or vertical rocks with small pockets of shade, to much shade and they may be roaming and away from an easy ambush point for them, therefore not ready to eat. So take your swim bait or spook, spinner bait, whatever… and run the bait so the bait is rubbing the rock and the paint off your bait ,yes that close, it has to be, big bass want it very easy and that's what we’re after here, big bass. It can be a pain in the butt to get the right cast, but the difference is a 1 lber or a 5 lber. Sometimes you will find a rock or a log in the right position where you have shade on one side in a likely spot where you can pitch over the log or rock on to the shady side and just hang target and shake it just enough to get it to slide slowly into the water out of your sight and Mr. Big will eat it.

So often you're cruising down the bank and spot a big fish, come slip out from a log boom and you just pitched a spinner bait 2 ft in front of it. Nothing. Had you done the sneak on him you would have had him or rubbed the bait down that log you would of got em. Instead, I got em - so sorry.

So now I’m sure if you have been reading or fishing awhile you have heard of fishing frogs on matts or pitching a Texas rigged bait into a hole behind a blow up in the matt or punching thick weeds or lilly pads. Well the same would apply under those areas. Remember to keep it super shallow like a foot or less in most cases. Very tight, super slow, and most of all… quiet.