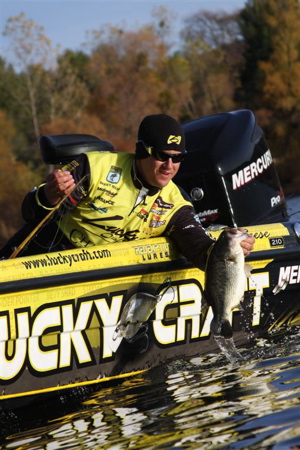 Auburn, Calif. – It’s not often that the general public gets the opportunity to interact with an Elite Series pro outside of tournaments and the occasional contact at seminars and sports shows. Now, thanks to 2007 Bassmaster Angler of the Year Skeet Reese, fans can communicate with a Bassmaster millionaire directly.

The 40 year-old professional angler from Auburn, Calif., is known for his innovative style, both on and off the water and will use the platform of his website, www.skeetreeseinc.com, to allow fishing fans to communicate with him in a format conducive to learning and entertainment. “Without the consumers that drive our industry, none of us would be in the position to do what we do,” said Reese of the reasons he is starting his Q and A feature. “I’ve found that there are a lot of people around the country who have specific questions about fishing and our sport in general. Realizing that other people might have the same questions, I decided to open up a forum for everyone to share and learn together.”

Reese, winner of three BASS events, including the 2007 Elite Series Capitol Clash on the Potomac River, is known for his versatile, aggressive approach to fishing that makes him a threat all over the country. He is also one of the sport’s most successful and widely recognized endorsers, and he is willing to share from his professional experiences directly with the fans from his website.

“I am open to all sorts of questions, and from the many that have come into the site in the few days since we activated the Q and A email address, people will have a multitude of topics to discuss,” said Reese. “I will answer as many questions as I can, and do it in the most direct and clear way possible. This is one way I can give a little bit more to our industry and the fans.”

The website, www.skeetreeseinc.com, will continue to feature news and information on Reese’s season and his career as a professional tournament angler on the sport’s brightest stage, the Bassmaster Elite Series. The Skeet Reese Q and A will become a regular monthly feature on his website, which has become the hub of all things SRI; questions can be submitted at qanda@skeetreeseinc.com.

Skeet Reese is a Bassmaster Elite Series pro, the 2007 Bassmaster Angler of the Year with career earnings that total more than $1.5 million. Reese has qualified for 10 Bassmaster Classic appearances, and has finished in the top 10 40 times, including three wins in BASS competition in an 11 year career. Reese is a 39-year-old California native who resides in Auburn, Calif. with his wife Kim, and two daughters; Leamarie and Courtney. Visit his website: www.skeetreeseinc.com.