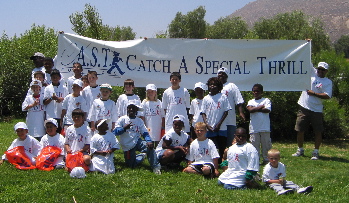 From Lake Perris to Lake Oroville, DWR staff along with the Departments of Parks and Recreation (DPR), Boating and Waterways (DBW), Fish and Game (DFG), and the C.A.S.T for Kids Foundation held three events in 2005 at SWP reservoirs throughout the State, and helped organize the C.A.S.T. event sponsored by the Bureau of Reclamation at Millerton Lake along with providing onshore activities.

This was the first year that DWR and the other State agencies brought the C.A.S.T events to SWP reservoirs, and it was the fifth time DWR partnered with the Bureau and other water agencies to host the Millerton Lake event.

DWR first became involved in C.A.S.T when staff from San Joaquin District and the Public Affairs Office staffed booths at a C.A.S.T event at Millerton Lake, which was sponsored by the Bureau. Members of the State Water Project Recreation Coordination Committee were so impressed with the program that they worked with the C.A.S.T. program and other State agencies to bring the program to State facilities.

“I am pleased to see the high level of interest and cooperation to support this agreement. Effective and critical partnerships are also being established with local support and businesses to increase the efficiency of these programs. The many volunteers are appreciated, especially the bass clubs that generously offer their times, boats, and enterprise. The result of this effort is that the children win,” said Karl Winkler, Chief of Central District.

“DWR’s role in this type of project is outstanding, especially since we are being proactive with our outreach efforts. I witnessed many positive expressions and comments from the youth who attended and their parents, and I’m proud to be a part of it,” said Dorothy Benjamin, Chief of the Water Education and Administration Branch in the Public Affairs Office. Dorothy worked on all of the C.A.S.T events and was the coordinator for the event at Lake Del Valle. The C.A.S.T for Kids team volunteers with disabled and disadvantaged children for a special day of outdoor adventure. Children who participated enjoyed a day of fishing, prizes, trophies, activities, and special entertainment provided by State agency staff, C.A.S.T members, and volunteers from the community. At each event, local sponsors supplied the children with disposable cameras for them to take pictures and keep, and DWR Photo Lab staff took photos of the children which were printed on site and inserted into a special plaque for the children to keep. Breakfast and lunch was also provided for everyone at the events.

DWR along with the Department of Parks and Recreation and others sponsored the first C.A.S.T. event on June 4th at Lake Perris in Riverside County. It was coordinated by Raphael Samuel from DPR, and 27 youths attended the event. Headquarters and field division staff helped work at the event, including Ann Marie Alexander, David Inouye, Kathy Simmons, Robert Fastenau, David Lara, Bud Thrapp, and Karl Winkler.

The youth at the Lake Perris event were recruited from the Moreno Valley Unified School District.

“The C.A.S.T. event at Perris demonstrated that State and local governments, nonprofit organizations, and local businesses can work together efficiently to plan and stage a successful community event,” said David Inouye, Chief of the Water Conservation and Land and Water Use Section, Southern District.

DWR along with the East Bay Regional Park District sponsored the second C.A.S.T. event on July 9th at Lake Del Valle near Livermore in the Bay Area. The event was coordinated by Dorothy, and 33 children were recruited by the ECO Village Farm Learning Center.

“The community showed a great deal of interest in having the C.A.S.T. event brought to the disadvantaged and disabled youths in the area,” said Dorothy. Department of Park and Recreation’s

On September 10th, 30 children from Northern California’s special education schools and the Make-a-Wish-Foundation attended the Lake Oroville’s C.A.S.T. event. John Ford, Tour Guide with the Oroville Field Division, along with representatives from four districts, coordinated the event. Field Division staff and staff from DWR headquarters also helped out at the event.

Several local agencies and organizations assisted during the event. Oroville Fire Department, the El Medio Fire Department, Kelly Ridge CDF Station, and the Berry Creek Volunteer Fire Department provided personnel to care for the children and assist them in and out of the boats. First Responder Emergency Medical Services provided an ambulance and paramedic on site for the event. The Oroville Kiwanis Organization partnered with Albertsons Supermarket to provide a pancake breakfast to everyone that morning. The Chico Bass Conservation Club helped plan for the event and provided many fishermen and boats for the event. The club catered, cooked, and served a barbeque lunch at the end of the days fishing activities. Local marinas provided the boats. (The house boat that Lake Oroville Marina provided was not altered for this event. It is a disabled access houseboat available for rent to the public.) Over 100 volunteers from the local high schools and Chico State University assisted through the set up of the event, running the event and helping the children during the event. A total of 36 sponsors helped in supporting the Lake Oroville C.A.S.T. event

The Lake Oroville C.A.S.T. event truly represented the connection of the State and local agencies right from the beginning. The organizing committee was formed at the first meeting with representatives from DWR, including John Ford, Ann Marie Alexander, Dorothy Benjamin, Karl Winkler, Bud Thrapp, Margie Graham, David Lara, and Sharon Brown. Other representatives included Steve Feazel of DPR, Anna Kastner of DFG, Tao Stadler of Oroville Chamber of Commerce, and Don Reighley, a local representative for the Bass organization. Heather Mello-Kamra of the Feather River Recreation and Park District also joined the committee. “We have a small community up here in Oroville, and many community resources are already stretched thin with local events, but everyone really stepped up and brought everything together. Even though this was our first C.A.S.T. event, I think it went really well,” said John.

In addition to the three C.A.S.T. events that the Resources Agency’s departments sponsored, DWR San Joaquin District partnered with the Bureau and other water agencies to host the fifth annual C.A.S.T. event on October 8th at Millerton Lake State Recreation Area in Fresno County.

“We are proud of the role we have played introducing this program to others and expanding the opportunities for many more children throughout the State to benefit from these events,” said Paula Landis, Chief, San Joaquin District.

This event is sponsored by the U.S. Bureau of ReclamationSouth-Central California Area Office, in conjunction with the C.A.S.T. Foundation.