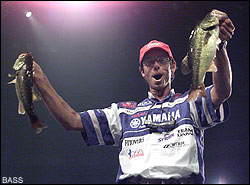 Are you ready for some of the best Bass action of the year? As the water temperatures cool, the fall bass fishing has really got going. Many of the Delta regulars prefer the fall bite in the Delta to any other time of the year, including the pre spawn period of the early spring. I can't say I blame them as the fall feeding binges does account for some of the best action of the year and some of the biggest surprises. Each cast could bring a bass, striper or in some areas even a salmon depending on the area of the Delta you are fishing. This is especially true in the fall when the anglers are tossing a lot of Shad pattern baits.

I had a chance to again speak with Michael Iaconelli Bassmaster Classic Champion from New York. We had a chance to talk in length about a technique he used to help him qualify for the Classic. I had thought Iaconelli's swimming jig technique would be great here on the Delta especially in the fall when the shad becomes an easy target.

Iaconelli started working on this technique on a local lake in upstate New York and has been using it to fool fish in highly pressured water of the east and contributed to his leap to the biggest prize in bass fishing Bassmaster Classic Champion. Swimming jigs is really and under utilized technique. "I don't want to call it a secret, but I did keep it under my belt for a number of years. I like to fish with power, and swimming jigs is a great power pattern" said Iaconelli.

Iaconelli has developed a new Stone jig with Manns Bait Company there are similar jigs built by some of the local manufactures that really work well. "One thing I look for in a jig is features that make it plane better. The Stone jigs flat design makes it swim really nice and allows it to be skipped into those hard to get to places. We added ribs as a third dimension for a couple of reasons. The ribs add to the vibration the bait puts out, drawing more strikes. The Stone jigs are built stout with 5/0 and 4/0 hooks ready to handle the big bite.

Because this is a swimming technique Iaconelli likes forage patterned jigs paired with big action trailers, especially twin tail grubs. Iaconelli said, "There are eight colors available to choose from. I can target suspended fish outside weedlines on wood edges or off rock banks". "Depending on the area I often use black/blue combinations, but I try to match the forage. There are two basic colors that I feel are important to my swimming technique. Of course white combinations I find work the best when matching the shad. The other is a skirt I don't believe is available anywhere else, Mike's Special. This is a unique combination of blue, gray and light brown that fills that Bluegill pattern. I really swim these longer slender jigs, often working the like a jerk bait or slow rolling blades. This is really a sleeper pattern, that not many anglers are going too, but when the pressure is on, it works" added Iaconelli.

While talking with Iaconelli there are other reasons that the swimming of jigs is worth a try. By working the jigs horizontally through the water column the bass a seeing a subtle baits in presentation the covers water much like slow rolling the spinner bait. Also unlike other jigs the angler is always in contact with the lure as he swims the bait. There is rarely any doubt when fishing this technique as it will produce wrist twisting strikes.

"Most people think that swimming a jig is a deep water pattern in timber or off deep docks. In river waters the technique gets even better allowing anglers to cover a lot of water quickly. It is also a high percentage way to catch fish." added Iaconelli.

Iaconelli's technique works here on the Delta too. Jigs that swim along this type of cover not only can account for some nice bass, but stripers too. For many years I have written about tossing lures for stripers, many anglers are now taking that technique one step further and flipping and pitching for the stripers. There's nothing like a 20-pound striper on 15 feet of line or less! Enjoy!