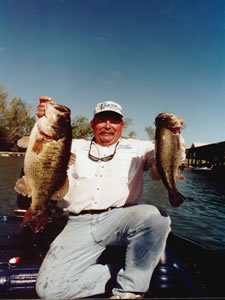 I have to admit that I was touched by Andy Cuccia's Pro Teen Event. He and his staff have touched so many teenager’s hearts and minds. I felt it when I fished with a fifteen year old young man name Drew. Drew is going to be a great fisherman some day. He worked very hard and with out a doubt he has the spirit.

The Pro Teen event was held on The California Delta this past Saturday. I saw 78 pro's sign up with 78 teenagers. What a great turn out. Most of the teenagers were very much into bass fishing including the young man that fished with me.

I met Drew at the pairing and he introduced me to his Mother. Drew's mother shared with me that Drew and his twin brother were fishing the event. I sure hope they thanked their Mom for taking them to the launch ramp at 4:45 a.m...

Drew and I jumped in the boat and waited for the tournament to start. We were boat 13 and in the third flight. We fished in four locations. We started out throwing spinner baits and started catching fish right off. Drew had never thrown spinner bait and I think after the first hour and ten fish later Drew believes in spinner baits. Drew changed over to Senko's and started catching fish. We were lucky enough to catch a couple of good fish including a six pounder on a frog.

You should have seen Drew’s eyes when he lifted that fish in the boat. I have to say it was right then that it really sunk into my head that this event was truly for the Kids. God blessed us with a great stringer of fish.

Drew picked up a sixth place win and some good prizes. I hope he walked away with some great memories. I know I walked away with a life long memory. Thanks Drew for the great day. There were so many good Professional fishermen there giving to the kids and giving back to the bass fishing world. To me it was great to surround myself with so many good people.

This was my first year being a part of the Pro teem event. I would recommend to anyone to join in on the fun. I hope to see you all there next year. Thank you Andy Cuccia for giving me this warm and never forgetting memory. Cooch, you have a big heart for these kids and it shows.