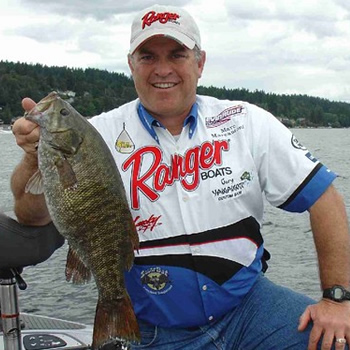 Ronald Hobbs, Jr. had such a deep bend in his rod that I wondered how the line guides didn’t pop off. It amazes me that 4-pound test line and a light action spinning rod can move an angry 5-pound smallmouth bass against its will to a waiting net. Although this spot on Lake Washington had 5 other bassboats in the same area, Ron was the only one getting his string stretched. With 20 pounds of smallmouths for their five fish limit, the team of Ron Hobbs and Ron Hobbs Jr. easily won the tournament.

Ron was using a drop shot rig, with the standard Gamakatsu #4 hook split shot hook, and a sinker of my own design called a QuickDrop; but it wasn’t the rig that was making the critical difference. It was the technique that Ron was using, called “Dropswimming.”

That same season Bob Sweeney and I fished a tournament on the Columbia River, launching out of Chinook Landing near Troutdale, Oregon. We ran about 40 miles to reach our first spot. Knowing that the smallmouths were in a prespawn situation, and were fattening up on every available baitfish they could find, we started out throwing LV-100 crankbaits, which are lipless vibrating baits made by Lucky Craft.

With the trolling motor deployed, I started following the shoreline of a rock island, firing long casts with the LV-100. Although my anticipation compelled me to work quickly, I forced myself to turn the reel handle slowly. For two weeks the smallmouths had ganged up on the baitfish, but the water was still cold and bait was so plentiful that they weren’t about to work hard to catch their meal.

Moving away from the shoreline, we crossed the rocky flat while fan-casting our Aurora Blue colored crankbaits. Reminding myself to slow down even more, I experienced the most thrilling sensation a competitor can imagine, my Lamiglas cranking rod stopped vibrating long enough for me to realize my lure had been swallowed! Fish ON! Before the 2-pound smallmouth knew what hit him, he was swimming inside my livewell. He was alone for only a moment. Within 10 minutes Bob and I had a limit in the boat. Just then a competitor showed up on the spot. It was Geno Staltar. Geno is a power fisherman, and I knew if he saw us throwing a crankbait he would do the same and have a quick limit himself.

What Geno isn’t known for is fishing a dropshot rig, so I nonchalantly reached for my spinning rod and acted like I had been using it all along. Bob let out a deep sigh and said, “Man, that was close, but what are we going to do now?” I replied, “In the words of the commercial, shut up and FISH!” So we cast our dropshot rigs in the shallow water and acted like we had been fishing this way all morning.

There was not a wisp of wind blowing, and very little water movement as the tide was coming in at about the same rate as the Willamette’s current. Since we were fishing shallow water, I rigged my 6-pound test McCoy mono with a 1/16-ounce QuickDrop weight, about 5-inches below my dropshot hook. Then I nose-hooked a 4-inch Flashtrix and doused it in scent. Geno watched carefully out of the corner of his eye as I flung the ultra-finesse rig to the flat. Once the tiny weight hit the bottom, I twitched the limber rod tip 3 times until my rod reached the 11 o’clock position. Then I let the QuickDrop glide back down to the bottom, slowly turning the reel handle at the same rate that slack was developing. This kept a graceful belly in my light line as the fake minnow slowly sank. As soon as the line tension indicated the weight had touched bottom, I repeated the process. Wham! The line jumped as if it had been zapped with high voltage. A sweep of my rod tip and I discovered the bolt of lightning that had hit was a 3 1/2-pound smallmouth, fast to my hook!

Before Bob finished putting the fat smallie into the livewell, I tied into its twin. Under the watchful eye of Geno, we replaced every crankbait fish in the original limit with bigger versions. To make matters worse for our friend, we continued to catch and release fish all morning, by DropSwimming our baits. When I couldn’t stand torturing our pal any longer, I waved Geno over to the boat. Tournament rules allowed helping another competitor, so I gave him a handful of 1/16 oz QuickDrops, some hooks and worms, and explained how to tie the rig. I told Geno to cast out next to me, and then copy my rod movements and speed. A couple of casts later, Geno was fighting his own 3-pound smallie! My partner and I began to wonder how smart we were when we saw Geno proceed to catch two more fish, but Geno was a good sport and thanked us and took off for different water.

At the end of the day, DropSwimming made us the easy winners, and Geno finished in the top 10. Best of all, we discovered (by accident) a dynamite technique that has resulted in many top tournament finishes.

QuickDrops Prostaffer Ron Hobbs Jr. has further refined the DropSwimming technique, and consequently has won many tournaments including back-to-back “Big Bass Blasts” on Lake Washington, and multiple AOY titles using this technique. Ron keeps his rod tip barely above parallel to the water’s surface, and bounces it slightly while constantly turning his reel handle. In effect he is bouncing the slack belly in his line, while moving the QuickDrop and worm steadily back to the boat. Ron uses the 1/16th oz weight in water less than 8-feet deep if there is no breeze, and moves up to the 1/8th version QuickDrop if there is a slight breeze. If it is windier, or the water is deeper, Ron will clip on more weight. He will use a 3/8 or 1/2 ounce size when fishing 20 feet deep in the summer (outside weedlines), so he can maintain a fast retrieve which is important when bass are heavily feeding. In most cases Ron prefers to have the length of line between the hook and the weight to be between 5 and 12 inches, though your imagination should be your only limit.

For both smallmouth and largemouth bass, try this technique with a Yamamoto 4-inche 9J Senko, Roboworm, or Clearwater Custom Tackle tapeworm.

In clear water, another favorite bait of mine for this technique is the Basstrix Flashtrix Minnow mentioned before. This bait perfectly mimics a baitfish, and DropSwimming a Flashtrix imparts a tempting darting movement that sends out flashes of light just like a school of baitfish that suddenly turns in the sunlight.

Whenever bass are in a feeding mood, you can swim a dropshot rig and perfectly exploit the desire of bass to fill their bellies. Tools like QuickDrop sinkers, ultra-sharp and lightweight Gamakatsu dropshot hooks matched with today’s quality soft plastic lures, allow new techniques like DropSwimming to develop and succeed. Give it a try and you will catch more bass, too.