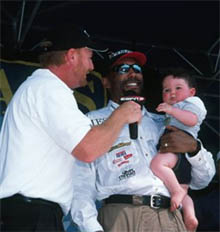 Well, here we go, Bassmaster Citgo Tour #2 . This time I am bringing the family . The only downside of Tour # 1 was being away from my family so this time I brought the whole crew with me. It was baby Marcus' first flight and he was a champ, saying Da Da the whole way down. Yep, he is really rocking now. Anyway, the flight was great except they lost my luggage with all my reels and all my other cool stuff I needed. Oh, well, things could be worse. So I met up with my buddy Tim Horton and we went out on the first day of practice. Roger Sheffield lent me a bunch of tackle. As usual, Tim and I had a good day of practice. I caught my first fish on a pink Riverside Jitterworm, then I caught a couple on the Green Pumpkin Kinami Flash. Then we went a little deeper and I was Carolina rigging with a Green Pumpkin Riverside Lizard and I caught my big one of the day, about a 4 lb monster. When he hit the lizard, he hit it so hard I almost broke my trigger finger. I thought I was snagged on bottom and Tim knew it was a "big 'un" as we say in the south, and he said you better hit the drag button and before I could say no, I am just snagged, that monster started pulling. Wow. That was fun. I finished the day by catching another good one, cranking ledges in the 8 to 10 ft range on the Excalibur Crawly bottom Fat free Shad.

Practice day # 2 I went out with the Guntersville Champion Kelly Jordan. Today was a great day of learning. We were doing more graphing and marking of spots and checking bites. We weren't setting on anything. We did a lot of flipping and I was flipping a June bug Riverside 10" ribbon tail worm. I got quite a few bites on it, but like I said, we didn't set on any. Boy did I sure learn a lot of technical stuff though!

Day # 3 I jumped on a plane and headed for the Stratos plant in Murfreesboro, Tennessee, to meet up with Denny Warren and the crew. I left for the Montgomery airport at 2:30 am driving the unfamiliar back roads in the deep parts of Alabama, waiting for a deer to jump out in front of my car or who knows what. There was major road kill every mile or so and white crosses all over the place marking unfortunate accidents along the side of the road. So let's just say I had no problem keeping my eyes open. Well, I made it to the airport, jumped on the plane and was off. From the time I got to the airport and was met by Jerry Franks, I knew it was going to be a great day and it was. Jerry and I just hit it Off, it felt like we had known each other forever. Everybody at Stratos is awesome. I met everybody from the top brass to the assembly person. Not only are the people behind the product there for you in every way, I saw how this boat was put together piece by piece, the car, the love, the passion. As an amateur, I get to drive in all the different boats and I have; you name it, I have been in it. I have always thought that the Stratos was one of the best boats on the water and now I know and have no doubt it is the best boat on the water. The decision was an easy one to make. Stratos was happy to have me and I was not only happy but proud to be the newest member of Team Stratos. Jerry took me back to the airport and I was on my way back to Eufaula. Well, it wasn't quite that easy. I had to deal with a couple of canceled flights, which I found out was a normal thing . If they don't fill the plane down south, they cancel the flight and bump you to the next one until they fill it. Nice. Smile. Cancel. I did make it back eventually. Set up my tackle and got ready for day #1 .Well, I had to meet my 1st day partner at 4:45 am. His name was Jeffrey Thomas . We met up and we got in the water and sat amongst all the boats waiting for the official send off. Boy, I can't express enough how much I love this time . Well, we were off and quickly had two fish in the boat on my Riverside counter attack spinner blade. Then the fishing, as quickly as it was on, turned off. That is how it has been all week though. Then we went out and started flipping. I was flipping my June bug Kinami Flash, Riverside flip & Jig , and Riverside 10" watermelon seed. I got a lot of bites but they were shorts. A short is a fish that doesn't make the grade. Each tournament has a different length that the fish has to measure to be legal . This tournament was 14" so, of course, you catch all the ones that are 13.75".

Day two I drew Brent Chapman. The fishing was real tough today. I got one fish on the Riverside 10" June bug worm, and that was it.

Day three I drew Terry Backstay, hell of a nice guy. He bent over backwards to educate me and to help me catch fish. It was just not meant to be. I blanked. Well, all things said and done, it was another great tournament. I met some great people, got on stage twice to meet the Fishmaster, I learned a lot . But most importantly, I had fun and was safe doing it. Thank you, Jesus.

Day four I got to go out as an observer with Dave Walker. He was a great guy and an awesome fisherman; he was flipping 90 % of the time. He had his first four fish by 10:35, then we didn't get the next one until 2:35 with a 3 PM weigh in. Oh, boy, it was a long HOT day. I will tell you, I was so happy to have my Kinesys sun screen today. I used the 30 spf spray and the lip balm and I tell you what, even in that incredible heat, I did not burn. In fact, I just got to work and my makeup artist commented on how nice and even my skin color looks. Thank you, Kinesys.

There was no wind, it was probably 100 degrees, no wind, we were cooking. But I was in good company. I was learning, so it was all good. Finally, at 2:35, after David never gave up, never got frustrated, he just kept plugging along, a perfect example of my motto, "there is no such word as can't." It happened. I have this thing that every time I go to take a little Nap, my partner catches a fish. So I had just closed my eyes and was saying a little prayer and Phwipp! I heard that awesome sound of a hook set. I jumped up and he was on. I yelled, "Thank you, Jesus!" and started to look for the fish to break so I could see if it was a good one. Then, there it was. It was a toad. I was like, YES! I wanted to go for the net but I had to remember I am not allowed to help him on day four. Then, all of the sudden, she wrapped herself around some toolies. I was like NO! Then David, with one fell swoop, reached for the net, scooped for the fish and put her in the boat just as she came unbuttoned. Whew! That was close. We both starting jumping for joy and throwing high fives and we even shared a hug. That is what I love about this sport, the bonding and camaraderie. You don't find that anywhere else anymore. We need more of that in this day and age. So get out go fishing with a friend, your family, the kids. You will have memories you will never forget. Well, I learned a real important message today: have patience and NEVER give up. Thank you, David and all of my pros for another great week of fishing. Thank you ESPN and B.A.S.S for letting me be part of such an awesome event. Thank you to my sponsors Evinrude, Kaenon, Kinami, Kinesys, Phenix, Lowrance, Pradco, Stealth and Stratos my beautiful wife for being there for me, my son Marcus for meeting me every day with that great smile that puts everything into perspective no matter what kind of day I have and last, but certainly not least, my Lord and Savior Jesus Christ, who, without Him, none of this would be possible. Well, I am off to Lake Mead, California, for The Won Bass Pro Am next so I will talk to you soon.