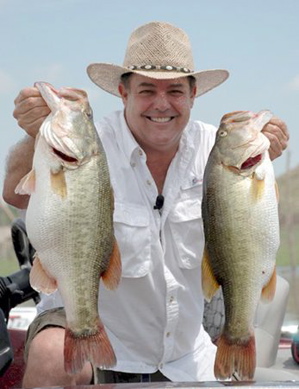 At both Lakes El Salto and Mateos, bass haven’t quite moved into their spawning patterns yet, but should soon. Anglers can find abundant smaller bass, those in the 2- to 5-pound range, off the points and shorelines. Many bigger bass came from deep water. Fish vertical rock cliff edges that drop quickly into very deep water.

Lake El Salto continues to hold big bass, but turned into quite a numbers lake in the past few weeks. Leonard Mailes of Pryor, Okla., achieved a lifetime milestone and topped the weekly lunker list with an 11.3-pounder, which sucked up a lizard. He and his fishing partner, Floyd Duncan landed 305 bass in three days. Floyd caught an 8-pound, 10-ounce lunker.

“Catching a bass over 10-pounds at Lake El Salto was on my ‘bucket list.’ Most of our fish were caught on Zoom 8-inch magnum lizards in watermelon redflake and senkos fished wacky style,” Mailes explained. “We caught lots of fish in the 5- to 7-pound range. This was my ninth trip to Anglers Inn El Salto and -- as usual -- everything was excellent. The accommodations, food, boats, guides and fishing was great. I am looking forward to seeing everyone again next year.”

Trip Copeland of Atlanta, Ga., enjoyed a good birthday, catching several fish in the 6- to 8-pound range and topping it off with a 10.5-pounder. The big one hit a watermelon senko, one of the hottest baits lately.

Dave Precht, editor-in-chief of Bassmaster magazine also scored with a 10-pounder that smacked a watermelon lizard. In 3.5 days of fishing, Precht and eight friends caught many bass in the 4- to 6-pound range and some larger ones. They also caught fish on 12-inch black and blue or watermelon worms, 3/4-ounce chrome and blue lipless crankbaits plus Yellow Magic and Pop-R topwaters.

“The most and biggest fish came on 8-inch watermelon Texas-rigged lizards fished as deep as 18 to 20 feet in the back of coves,” Precht said. “We also caught some around the trees in water 10 to 12 feet deep. During the warmer part of the day, we fished deeper holes. I pulled a lizard out of the tree and was reeling the bait really fast by the boat to prepare for another cast when my biggest one hit.”

Not counting anything weighing less than 2 pounds, Terry Connolly of Chicago and five friends landed more than 685 pounds of bass in five days. The tally included two topping 8 pounds, 10 exceeding 7 pounds and 12 weighing more than 6 pounds. They caught most of their fish on soft plastics, white spinnerbaits and Zara Spooks. “We really enjoyed the trip,” Connolly said. “The service and food were beyond good; they were great. I can’t wait to go again next year.”

We welcome Bradley Hallman, a professional bass angler from Norman, Okla., to our pro staff. Bradley will represent Anglers Inn on the tournament trail and also lead groups coming to fish at either Lake El Salto or Lake Mateos. We wish him good luck on the trail this season. If you want to join Bradley in Mexico, call 1-800-GOTA-FISH.

Situated in an isolated wilderness nestled in the Sierra Madre Mountains, Lake Mateos receives very little pressure, but offers anglers some of the best fishing and most majestic scenery anywhere. A group from Rapala Lures came to Lake Mateos to test some new baits and caught tons of fish.

“We had a fantastic trip,” said Zack Swanson, vice president of sales at Rapala. “Lake Mateos is the best fishing lake in North America. We come every year and usually have the entire 55,000-acre lake to ourselves. The lodge is first class. We caught a lot of fish on many different baits, but most of our fish came on white Terminator spinnerbaits. We caught fish all day on those. We also caught fish on our new Clackin’ Rap lipless crankbait. The X-Rap slash bait in silver, ghost and mossback shiner were really good in the mornings and in late afternoon.”

Although more known for producing fabulous numbers, sometimes 150 fish a day in the 2- to 8-pound range, Lake Mateos can deliver some lunkers. Fishing with Gene, his dad, plus his uncles and friends, Greg Van Bebber of Fresno, Calif., landed a 6-, 7-, 8- and a 9.9-pounder one day. He caught many his fish on a blue and chrome Rat-L-Trap with a twinge of orange in it. They also caught several bass in the 4- to 8-pound range before heading to El Salto for the Sweet Repeat combo trip.

“We caught a bunch of fish, about 60 to 70 per day,” Brooks said. “We caught a lot of 4- and 5-pound fish and some 7- and 8-pounders. Our hottest baits were watermelon or pumpkinseed lizards and senkos. We also caught some bass on Pop-Rs in the morning.”

Taking a break from her duties as a masseuse at Anglers Inn Mateos, Lucy Salagado caught her first bass ever one morning. Before lunch, she added a 5.5-pounder and a 9-pounder to her tally. The biggest ones hit worms at the base of a sheer, nearly vertical rocky bluff that dropped abruptly into about 25 feet of water.

Sometimes, it takes a long time for a worm or lizard to reach the bottom in such deep water so try a heavy black and blue jig with a craw-worm trailer. Fished vertically, a drop shot with a sizeable weight can also reach bottom quickly and stays in the strike zone tantalizing bass.

For more info or for booking your next Anglers Inn International adventure, call 800-GOTA-FISH, (468-2347) or send an e-mail to info@anglersinn.com.