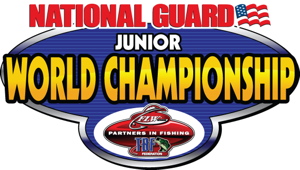 COLUMBIA, S.C. (July 22, 2008) – The Bass Federation announced Tuesday its field for the 2008 National Guard Junior World Championship on Lake Monticello in Columbia, S.C., Aug. 15-16 in conjunction with the $2 million Forrest Wood Cup presented by BP and Castrol – the world’s most lucrative bass-fishing championship.

The National Guard Junior World Championship will feature youth anglers representing 39 TBF state federations fishing for $30,000 in scholarships plus $12,000 youth-program grants for their states. Each participating state will be represented by two junior anglers: one in the 11- to 14-year-old bracket and another in the 15- to 18-year-old bracket.

“These junior competitors are much more than great anglers,” said TBF President Robert Cartlidge. “They are positive examples for their peers, and they represent the future of our sport. Learning to fish through their state TBF clubs provides these children with an outlet for clean family fun. It’s a great activity that they will enjoy for a lifetime.”

“We really want to thank the pro anglers who serve as mentors during the tournament,” said FLW/TBF Programs Manager David Simmons. “Of course, none of this would be possible without the hard work and support of TBF youth directors and parents nationwide as well.”

Additionally, FLW Outdoors, on behalf of the National Guard, will award $1,000 to each of the state TBF chapters represented by the six finalists in each age bracket. This money, totaling $12,000, will benefit each chapter’s youth program.

For more information about TBF Junior Angler programs, contact your state’s TBF chapter. A list of chapters can be found at www.bassfederation.com.