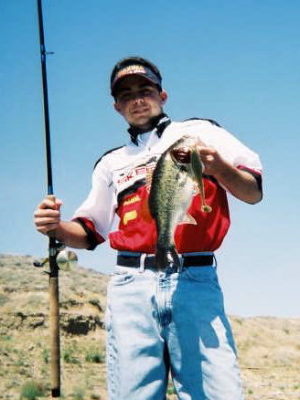 Over the last few months I have been preparing for the Aim Marine WON Pro/Am on Lake Havasu, which took place February 26-27. In the previous months I have discussed getting prepared to travel and compete in a Pro/Am tournament. Now that I have returned I would like to share my experiences from my weeklong adventure with you.

Saying practicing and competing on Lake Havasu for a week straight was fun is an understatement. However saying it was amazing, is starting to put it into perspective. Getting to Lake Havasu a week prior to the tournament starting can definitely help you, however as I learned it can hurt you as well.

Going into the first day of practice, I decided to start around Sand Point, which is just a little more than half way down towards the south side of the lake. Once I made the run to Sand Point, I realized that if I continued south any further I would be fishing some really muddy water. I opted to focus my practicing from Sand Point back up towards Windsor Beach, the host site of the tournament and fish the cleaner water.

The first day of fishing was fairly tough for me. I focused on searching for main and secondary points. After the first day of fishing I had caught only three fish total, consisting of two crank bait fish, as well as one drop shot fish. Tuesday, the second day of practice was when things started to turn around for me. Within the first few hours I had found three different spots, all which had produced three or more fish per spot. For the rest of the day, I tried to duplicate my newly found pattern, and come up with more spots. By the end of the day I had caught over fifteen fish, and was starting to build up confidence and a pattern for the tournament.

After the second day of practice, I decided not to stick any more fish before the tournament, so I spent the evening taking hooks off of my reaction baits, and cutting the tips and barbs off of my drop shot hooks.

On the third day of practice my luck continued and my focus on main and secondary points seemed to be paying off. I went in at the end of the third day with a total of 12 bites, all which were shaken off because I didn’t want to stick any more fish during practice. Going into the fourth day, my goal was just to keep finding some more spots. However, the weather started to drastically change. For the first three days of practice, the weather consisted of cloudy, rainy, cold weather.

About midday Thursday the cold front started to clear Lake Havasu, and it became warm and sunny. I decided to spend the rest of the afternoon checking my previous spots to make sure the fish were still on the points. I got bit on every one of my previous spots, and still had high hopes going into the fifth day of the tournament.

Waking up Friday morning, the day before the tournament to clear, high bright blue and sunny skies should have been the greatest indicator that things were going to be changing. The water temperature had drastically jumped, and there were some fish actually moving up onto beds. I decided to spend Friday looking for enough bed fish to fill out a limit for the first day of the tournament. At the end of the last day of practice, I had found eight bed fish, which I knew I could catch, and still felt very confident about my main lake points which seemed to be producing quality fish.

Going into the first day of the tournament, I was excited. I had adrenalin rushing all through my body the night before and the morning of the first day; I couldn’t wait to make that first cast.

Going out about 100th boat out of 134 was a bit of a challenge, however I never knew it would have such a great effect on my morning. My first spot was the closest sight fish, about three miles away from the launch sight, and when I pulled up there and realized the fish was still there, I knew it was going to be a great start. Within five casts, I had caught the three plus pound largemouth and was off to my next sight fish. However, that turned out to be the only sight fish that I caught the first day, as the rest of my sight fish had already been caught by the time I had got to them. I didn’t want to waste time looking for new fish on the day of the tournament, so I decided to try and catch some fish off of my drop shot pattern on main lake points. As I pulled onto my second point, the first cast I took I caught a nice two and a half pound smallmouth, which had put me with a great start with nearly six pounds for the fist two fish of my limit. However, I fished the rest of the day without catching another fish. My point pattern had completely fallen apart, and I weighed in only two fish on the first day of the tournament.

Knowing that it was going to be near impossible for me to cash a check in the tournament, I went into the second day with a positive outlook on the day deciding that I was just going to have fun. I started off the day continuing the drop shot pattern hoping that it would turn on, however after nearly three hours with no success, I decided to abandon the pattern and spend the rest of the day sight fishing.

I went to an area where I had previously seen a lot of empty beds about fifteen minutes away from the ramp, and when I arrived, I was pleasantly surprised to see that the beds contained fish. However, the fish had just moved up on the beds and were quite skittish, so it took some time to catch them. I basically spent the rest of the day working to catch two males, which ultimately ended up being the only two fish that I caught on the second day of the tournament.

Overall the tournament experience was a blast. Getting off to a large lake to fish for a week straight and compete against some of the best fishermen in the west can be a bit intimidating; nevertheless it is still a great experience. I look forward to the next time I get a great opportunity to fish another Pro/Am tournament.