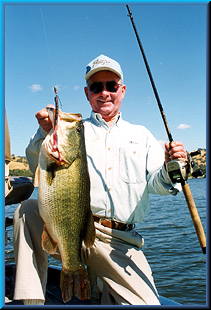 If I am not fishing, guiding, or giving seminars, there is nothing I like better than looking at photos of giant bass – or any bass that others have caught. To see folks in person with their photos and share their special fish stories is almost like being there when it happened. I like sharing my photos and love others to share theirs. I have been accused (especially by Kent Brown) of always having a photo or two in my pocket and that is usually true. Believe it or not, I really enjoy telling the story of the catch rather than showing the photo - unless the fish is especially gorgeous. When Kent tells audiences at I.S.E. that I held my children by their lower lip for photos – well, that simply isn’t true (at least I don’t remember doing that, har)!

When you see a photo of a huge bass in a magazine or in the westernbass.com photo section, don’t you wish you could have been a fly on the boat and seen where, when, and how that fish was caught? I know I sure do!! It is hard to get excited however, if a photo of a bass is posted and you can barely see it – or the person who caught it. What you see are these tiny specs in the middle (hopefully) of a scenery photo that would be accepted in a travel magazine or westernscenery.com (I made that up!). I love scenery photos – I take them all the time. But fishing photos are about fish and the people who catch them. Granted, there are times when it is tough to balance the subject (fish and person) with a beautiful background. An example that comes to mind are the several photos I have taken from Lake Almanor (3 have been cover photos) with folks holding a beautiful smallmouth with Mt. Lassen or lovely green pine trees and the blue lake as a backdrop. I want everything in the photo, but the purpose of it is to see the markings and quality (size) of the fish along with the excitement on the face of the happy angler.

I don’t consider myself a photography expert, but I have taken thousands of day and night photos and have learned a lot through trial and error. The main point I want to make is a rule pointed out to me by Scott Green’s father, Larry. He told me to always “fill the frame”! Most folks take pictures from too far away or they don’t use the zoom feature when their camera has it. Obviously, this makes the subjects appear small. Don’t worry about the background – some of it will always show in the photo. If you are using a throw-away type camera, try to get as close as you can – fill the viewing window with a face and the fish. Things are easier these days if you are using a 35 mm or digital camera,. Try to fill the frame by getting close to the subject or by using the zoom. If you aren’t quite close enough, today we can crop or enlarge whatever part of the photo we want. Have you ever been to a photo shoot? Do they shoot 5 shots and call it a day? Not a chance! If you get that trophy bass, or your child’s first fish – shoot a roll or two of film – or 30 digital shots. Believe me – ONE will be just perfect! I had the pleasure of being on the Bassmaster Magazine Lunker Page (June, 05) with my 12-11 largemouth from Collins Lake. One of the ladies at the lake shot 2 rolls of 35 mm film. Sure enough, while several were good, ONE was worthy of a Fish Sniffer cover photo and Bassmaster consideration. When saving memories, film and developing is cheap!!

Here are a few other things to consider when trying to create the perfect photo of your catch. Try to hold the bass parallel to your body, in other words, flat – so we can see the whole side. One of their strong points is the girth – show it! The bass will even look better if you favor the belly (especially for pre-spawn bass), that is, turn the belly slightly toward the camera. If you turn it away from the camera, the bass will appear to be smaller. For huge bass, it is a good idea to support her with both hands for a horizontal shot. One hand will hold the lower lip while the other should just be in front of the tail - using a few fingers for support. We don’t need to see your whole paw! Also, this causes the belly to sag a bit and you can tell us “she went 18 at least”!! It looks good to have the head of the fish a little higher than the tail. How much is personal taste. Vertical shots are ok and are often preferred by publishers, but don’t hold the bass more than a few seconds that way. You can seriously damage her “insides”! When doing a photo shoot in warm water, do it in segments. Take a few shots and put her in the livewell for a minute or two. Then repeat the process and try to get her back in the water as soon as possible – swishing her back and forth before letting go. She may thank you later after having added a few pounds! Two other quickies – don’t hold the bass close to your body and don’t hold your arm straight out. A half bend in your arm is perfect. Also, if you shoot the photo from above the subjects, they will tend to look smaller. If you shoot the photos looking up slightly, they will look a little larger. I usually have clients stand on the platform of my 520 and I shoot from the floor. A person kneeling with a big fish – shot at the same level – can be a very effective photo. My recent client catfish photo (westernbass.com – photos, Clear Lake) is a good example.

Early morning and late afternoon photos are the easiest because of the sun position. Make sure the sun is directly behind you. Sun to the side causes shadows. The toughest photos to take are mid-day summer shots. The sun is straight overhead and shadows are everywhere on a persons face, especially if wearing a hat. The hat may have to come off (what’s a bad hair day with a big fish!). I have learned the hard way that you should have the forced flash on when taking mid-day photos. Again, take several from different distances and one should be “it”. When taking night photos, hopefully your camera has the red eye function that outlines the subject so you can see what you are shooting before the shot takes place. It is best not to get too close so the light doesn’t bounce off the fish which will tend to make the person dim (if I’m holding the fish, that’s good!). A big bass’ white belly is very bright with a flash. You are better off getting a fairly close shot and then later cropping it if necessary. Digital cameras need a bright flash. My new Canon A-95 seems to be doing a great job.

Finally, sometimes it simply doesn’t matter how big your bass is or how great the photo looks. I was very proud of my photo holding a 9-6 largemouth that I caught at Pardee this spring. I made it on the westernbass.com home page for approximately 5 hours before I was replaced by a beautiful blonde holding a bass that wasn’t nearly as big as mine. I just don’t understand! Moral of the story – the fish is only important in the eye (hand!) of the beholder – er, holder!!