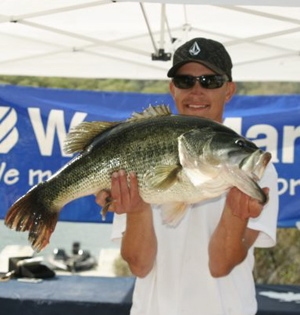 NAPA, Calif - Nobody that has ever fished one of the Future Pro Tour’s past four season openers on Lake Berryessa would have ever doubted that a double-digit largemouth bass would be caught by some angler pre-fishing for Saturday’s fifth opening season event. But few – including Jason Milligan and Michael Wright, would have ever imagined there would be a fish brought to the scales during competition that would set an all-time big fish record for and FPT event.

“I’m still shaking from the experience”, said a wide-eyed jubilant Michael Wright, who was responsible for netting the 14.89 pound largemouth that beat Robby Chickasawa’s big fish record at the 2005 opener by a full pound. “We had about 13 pounds at about noon, and were looking to upgrade, as we knew 13 pounds would probably only put us in the top ten”, he added.

“We decided to start throwing big swimbaits with the hopes of catching a big one and when we saw that fish come out of the water we new we had it won”. The overall weight for this new team from Anderson California was 22.10 pounds, beating their closest competitor by nearly five pounds earning them their first Future Pro Tour crown.

And you can be sure that the rest of the 160 teams participating in the opening event were in no way disappointed as just about all teams weighed in 5-fish limits, throwing literally anything they wanted to. “We probably caught over 50 fish today on a variety of baits”, said newcomers Sam Watkins and James Prieto of Fresno, who having never seen the lake prior to last Saturday’s event, weighed in a respectable limit of bass. “I don’t know when we’ve had more fun fishing an event”, they added.

2nd place finishers John Low and Russell Agnew used Lucky Craft rip baits to finish high in the competition bringing in a 17.26 pound limit, and the 3rd place team of John and Ed Zinda used jigs and worms to bag 16.66 pounds of bass and secure their “show” finish in the event. Fishing with his father Cliff, “Future” Future Pro angler Colby King started the year off right, pulling off a 1st place win in that division, and did much to get himself closer to the FFP Angler of the Year award which for 2007, will be and a brand new ATV Quad cycle. Over fifteen father/son, father/daughter teams participated in this division at this event, and every time one of these young anglers enter a FPT event, their name will be entered into a drawing for a fully outfitted IBANEZ tm electric guitar set, which includes amps, strings, case, cables and 1 month’s private music lessons - a value worth more than $1000 courtesy of SKIP’s music of Sacramento, Elk Grove and Modesto. So the more times your youth enters a FPT event, the better chance they have of winning this Rock and Roll package!

The small boat division’s crown was taken by Jim Bartlett and Shawn Maples, on the strength of a 12.87 pound limit, taking home $500 for their efforts. Small boat anglers are excited about this year’s extra incentive prize being offered their division at the 2007 FPT Classic (Lake Oroville), where in addition to fishing for the fully-rigged Ranger 188vs with Evinrude 150 E-Tec, the highest finishing small boat will be awarded the “Ultimate Rigging Package”, a package that includes a Trolling motor, batteries, 2-bank battery charger, depth finder, Plano “Flipsider” tackle boxes, and two suspender style lifejackets. So come on down all you guys with small boats and join in on the FPT fun!

The 2nd event for the Future Pro Tour will be held at beautiful Shasta Lake Saturday, April 14th with anglers shooting for the quarry in that fertile lake’s plentiful spotted bass fishery. And for those that don’t know all the nuances required to be successful at fishing deep, clear water lakes, the night before the event at the West Marine store in Redding, we will host a seminar that will feature some of the west’s top professional anglers who specialize in fishing for spotted bass on Shasta Lake.

Pro Support Staff members Greg Gutteriez, and Russ Meyer, who have both won B.A.S.S Open championships on Shasta Lake, and Ranger/Evinrude Pro Billy Townsend (aka “Mr. Shasta”) who has won 6 fully-rigged boats in pro competition on Shasta Lake, will be on hand, offering on-on-one instruction to all anglers in attendance. Prior to this, at Phil’s Props and Tackle in Redding, we will host a delicious free all-you-can eat BBQ with all the fixins’. So, after you pre-fish on Friday, come over to Phil’s ….get the tackle you need..and get your grub on!

The official host hotel for this event will be the Holiday Inn in Redding - off Hilltop Dr - 800-345-8082. This is a beautiful full-service hotel right across the street from all the restaurants and has all the amenities you need - plus lots of parking for your rigs. Get your reservations early and make sure you let them know you are fishing the FPT event to receive the special group rates we have set up for you. For more information about this upcoming event please visit us at www.futureprotour.net or call 916-768-0938.

We hope to see you all at Shasta!

The Future Pro Tour is proudly sponsored by: