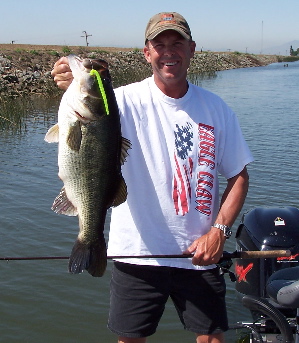 Each and every day there is at least one time when the bite will be “ON” Delta bass mainly live in the 2-4 foot range most of the time and at different times of the day and different time of the year they relate to different structure. In general, I have found that at the higher tides bass relate to the shallow flats and rocks and weeds. Then when the tide runs out the relate more to edges and ledges, off shore weeds and structures. “Now” when you find the bite good on a certain type of structure it can in many cases last for several hours over different parts of the Delta.

Say for example you find a good bite around Big Break on the high tide, rocks and weeds. The bite seems to go away after the tide switches “which is usually the case”. From Big Break run up river toward Stockton say 10 miles now you catch the same tide where you were catching fish. Just find similar structure and fish until the bite stops then run south or north again. From Antioch to the Southern Delta there is about 4-5 hours difference so you can follow the tide for over half a day.

Now to go backwards, if you are down south or north and the bite is poor you can run toward the west and change your tide. The one thing you don’t want to do is follow a bad tide. If there are not biting don’t follow that same tide down south, either wait for the bite to come on or go west. The whole key to running the tide is to get on the bite and try to keep throughout the day. One thing I do is when starting out is to use reaction baits until I find the bite starting to pick up. I may start out with a Speed trap and after catching a few fish I’ll switch to a Spinnerbait “Persuader of course” then to a Helix weightless worm or a big tube to entice a few bigger bites. And maybe top water if the water clear and warm. Milk the bite for as long as you can then run a few miles and start over.

Before you start running the tides you first need to understand the tides and what they are. I use the Hal Schell’s Stockton tide chart for the simple reason that I have most of the area times memorized. I would recommend no matter which book you use stay with the same one year after year. Tides are water movement created by the sun and moon. Each day the water comes from the ocean and travels inland then back again “twice”. Some areas of the Delta the water goes up and down and other areas have current. The water level moves 1 to 6 ft per tide and advances forward about 70 minutes each day. Tides are similar every other week. This means if you catch fish this week it will not be the same next week. Also the water level is important. There are 6 different tides to be concerned with: Incoming, Outgoing, High Tide, Low Tide and each of the switches. A key thing to remember is to fish your best spots on the switches. Plan your day around the tides Pay attention what tide you caught fish on.

To illustrate the basic idea with a simple model of a planet completely covered by an ocean of uniform depth, with negligible friction between the ocean and the underlying planet, as illustrated in the adjacent figure. The gravitational attraction of the Moon produces two tidal bulges on opposite sides of the Earth.

Competition between the Sun and Moon in producing tides

Without getting too much into the technical details, there are two bulges because of the differential gravitational forces. The liquid at point A is closer to the Moon and experiences a larger gravitational force than the Earth at point B or the ocean at point C. Because it experiences a larger attraction, it is pulled away from the Earth, toward the Moon, thus producing the bulge on the right side. Loosely, we may think of the bulge on the left side as arising because the Earth is pulled away from the water on that side because the gravitational force exerted by the Moon at point B is larger than that exerted at point C. Then, as our idealized Earth rotates under these bulges, a given point on the surface will experience two high and two low tides for each rotation of the planet.

Another complication of a realistic model is that not only the Moon, but other objects in the Solar System, influences the Earth's tides. For most their tidal forces are negligible on Earth, but the differential gravitational force of the Sun does influence our tides to some degree (the effect of the Sun on Earth tides is less than half that of the Moon).

For example, particularly large tides are experienced in the Earth's oceans when the Sun and the Moon are lined up with the Earth at new and full phases of the Moon. These are called spring tides (the name is not associated with the season of Spring). The amount of enhancement in Earth's tides is about the same whether the Sun and Moon are lined up on opposite sides of the Earth (full Lunar phase) or on the same side (new Lunar phase). Conversely, when the Moon is at first quarter or last quarter phase (meaning that it is located at right angles to the Earth-Sun line), the Sun and Moon interfere with each other in producing tidal bulges and tides are generally weaker; these are called neap tides. The figure shown above illustrates spring and neap tides.