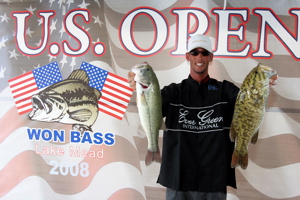 As predicted, tough conditions on Lake Mead prevailed and mid-day temperatures ranged from 102 to 107 degrees, but Bailey reported, “We had an awesome time. I did the same thing as in practice.” His catch also included the biggest fish of the day, a 3.23-pound largemouth.

In third place was Gary Dobyns of Yuba City, Calif. who finished the first of three days with 9.05 pounds. “I did much better in practice,” he said. “It was a scratch, scratch deal.”

A complete list of standings should appear at www.WON BASS.com.