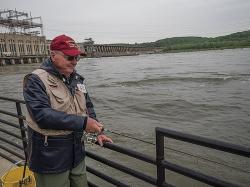 Leon Senft remembers a time when he and other fishermen lined the shore of the Susquehanna River below the Conowingo Dam and hooked American shad almost as fast as they could cast their lines in the churning water.
"We really had a bonanza there for a while," recalled Senft, 85, who's been angling for the big migratory fish longer than most people are alive. "It was not unusual to catch 50–100 a day. My personal best was 175."

That catch-and-release heyday for Senft was maybe 20 years ago, when American shad appeared to be on the rebound from a severe decline in their springtime spawning runs. Optimism abounded, as a big new fishlift hoisted more and more of them over the 94-foot dam on their way upriver to reproduce.

But the rebound went off the rails. Although the number of American shad getting a lift over Conowingo rose steadily for a decade, it then dropped and kept dropping.

Now, after years of study and negotiations, the U.S. Fish and Wildlife Service and Exelon Corp., Conowingo's owner, have come up with a new plan for rebuilding the Susquehanna's runs of American shad and river herring — related species that are even more depleted. In a press release announcing the deal in April, a federal wildlife official called it "a victory for everyone who lives or recreates on the Susquehanna River and the Chesapeake Bay."

But those close to the situation are still cautious. Given the discouraging track record so far, they say, bringing these fish back will take a sustained effort for decades — if it can be done at all.

Read the rest of the story at Bay Journal here.
Photo: Leon Senft, 85, fishes at Conowingo. He recalled how decades ago he could catch 50–100 American shad a day. In 1980, Maryland' imposed a moratorium on harvesting the fish. Virginia followed in 1993. (Dave Harp)