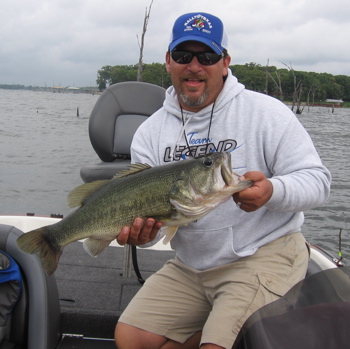 “I’m disappointed that there aren’t more kids in the audience today.” A statement that strikes out and hits you right between the eyes. This is how Ken Cook started off his second lecture session at the BASSMASTER University recently held in San Jose, CA.

It was hard to debate the fact with him. A quick look at the audience proved Ken to be correct. Less then five youths or teens in attendance at the seminar, which featured three BASSMASTER Classic Champions and some awesome local talent to boot.

Ken basically gave everyone in the room a wake up call and let’s all hope that they gave it some serious consideration. “It wouldn’t have been too much for you folks to have brought a youngster with you today. It’s the only way to grow our sport.”

Truer words have never been spoken. And now it’s time to take Ken’s words beyond the University and lay it squarely at all of our collective feet.

It took some guts to go before a crowd and tell it like it is or call it like you see it, but Ken Cook did that and having the words come from a respected angler and Classic Champion should have been sobering for some.

Recently, the State BASS Federation had a youth tournament championship on the California Delta. Only one club was out there to participate. One. You’d think that there would be more then one eligible kids club in the state to fish this event but apparently there is only the one. Doesn’t it seem odd that, in a state that seems poised to have a new world record largemouth, there would have been at least a couple few youth oriented clubs out there. I mean… hey, it’s a big state! And let’s not forget that the state already has the world record spotted bass, caught on Pine Flat Reservoir.

But then, while going through the recent fishing trade shows currently making their way through just about every state across the country, I noticed the same little problem. Where are all the kids? You’d think with the chance to learn directly from the best the West has to offer that there would be more kids in the house, but I didn’t see a whole lot of beaming youthful faces out in the crowd. Don’t get me wrong, there where kids in the greater crowd. But nowhere near as many as I had hoped to see. At least not gathering in the fishing seminar areas.

It did warm my heart to know that,on the weekends during the International Sportsmen Expositions, the one youth club that did fish in the state championship this past year wasn’t in attendance only. The Delta Teen Team members were gathered in mass over at the youth pond assisting, in some cases, more youthful anglers learn how to catch trout and sturgeon.

Get your kids involved in fishing. If you’re a member of a club consider opening a youth division to your activities. When you see kids fishing do what you can to encourage them and hey, if you have an open back seat, why not fill it with a kid. Maybe your own or a kid from the neighborhood.

Hopefully we’ll all turn a keener eye towards bringing youth into our sport. The smiles you receive make it most definitely worth your while.