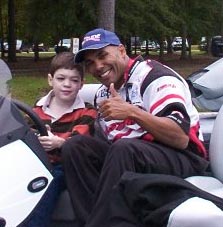 This was one of those special weekends, the reason why I do what I do. It all started back in July when it was brought to my attention that there was a contest called the Paul Newman Make A Difference Day. It entailed one day a year that the Actor, Paul Newman, had set aside and asked people to come up with a way to make a difference in the life of an individual or those of a group, by raising money or awareness to their plight. The date was October 26th, which was the day that I was scheduled to be in Eufaula, Alabama hosting the Stratos Owners Tournament. Eufaula also happened to be the home of my new friend Lee King who suffers from the terminal degenerative decease Niemen Pick. It seemed to be the perfect opportunity to "Make a Difference."

I approached the president of Stratos, Gary Clouse, and asked if they would be interested in helping me make this a significant day. Gary said, "how can we help." I also approached my friends Amber & Derek Yamamoto from Kinami Baits for support. They said "tell me where and when." So it was done. I entered the contest & set out to make a difference.

The King family was hosting an annual fundraising event. I supported this by interviewing with Soap Talk, contacting writers for Soaps In Depth magazine and arranging several newspaper articles. I contributed to the event by offering a tour of the GH set at auction, donations from Stratos and the Yamamotos and participation of the Stratos Pro Staff for autograph signings. At the end of the day, after handing out the 200 donated t-shirts from Stratos, personally autographed the pros, enjoying the crowd of ehthusiastic soap fans and eating the requisite hotdogs we had raised an additional $3,400 to add to the total donations.

The highlight of the day for me was seeing my good buddy Lee and having him give me his famous thumbs up. Although I was truly humbled in a way I have never been before when James Martin, president of the Eufaula City Council came out and presented me with a key to the city. I was speechless & honored. However this day wasn't about me it was about Lee King and kids like him who suffer from this terrible disease that is to often miss diagnosed due to the lack of awareness. Having no cure, NP has only a single recorded case of a child living past their teens. One short week before Make a Difference Day, Lee King started having the seizures which mark the beginning of a rapid decline in his condition. Although I will continue to raise money and awareness for NP, and will be back next year to Host the Lee King Buddy Tournament. The reality is Lee may not be there. I pray everyday I am wrong, but statistics say otherwise. I am honored to have had the opportunity to become friends with such a courageous young man. I am humbled in ways I can't express. When I drop to my knees to pray I don't only thank the Lord for my blessings, but I beg him to continue to work through me in whatever way he sees fit; to give back and make a difference everyday.

These kids have only their childhood to live a lifetime. We need to raise awareness and fund more significant research. We need To Make A Difference .If you want to find out more about Neimen Pick or see how you can make a difference go to www.nnpdf.org.