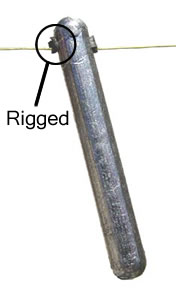 It was a pleasure to be able to attend 2004 ICAST/LAS VEGAS. Here is the first product featured on WesternBass.Com from the show, Mojo Lures Co. The NEW Rock Hopper...

The NEW Rock Hopper weight design developed by Mojo Lure Co. was specifically designed for fishing rock structures. The design helps when fishing extremely rocky areas. The Mojo Rock Hopper was deisgned to work in areas such as rip tap shore lines, dam walls, retainers with pilings, rock bottoms, isolated hard bottom structures, trees and limbs and just about any erratic unforgiving hard bottom where other weights get gobbled up and lost.

The Rock Hopper weight is computer designed with a cross-casted line bore at one end of the long cylindrical weight with a small angle incorporated into the bore. The line bore is also strategically placed in an ideal position at the cone end of the weight. Thanks to this design, it allows the Rock Hopper to glide over solid bottom debris.

The weight stands in a straight up, near vertical position while dragging this rig through the worst cover and structure. Its design also allows the fishing line to lift the head of the weight over obstructions without any frontal contact of the sinker.

The leader line and rigged hook, with your favorite offering, develop enough resistance to assist in holding the weight in a vertical position and compliment the cross bore rigging method. This weight is designed to pivot and adjust its degree of camber angle for ultimate performance, while it is pulled through various obstructions.

The Rock Hoppers design allows this New weight to be versatile in all bottom composite fishing conditions and situations. The design makes it very difficult to get the sinker snagged and hung permanently, causing the rig to be broken off. Since it stands up vertically, if it does snag, you have a real good chance of freeing the weight by shaking your fishing rod vigorously with slack line. Also because it's mounted vertically instead of horizontally, (inline) like most sinkers on the market today, the weight is forced up and out of the snag, instead of into to the snag, allowing the weight to be released from the obstruction. The weight can be Carolina rigged by use of a #10- 30 lb swivel as the sinker stop, allowing the weight to slide. It can also be pegged with Mojo’s Sinker Stop tool and rubber, allowing the weight to be slid on the line to give the angler desired leader length, without damage to the line. Two or three individual strands will be sufficient depending on weight and line size.

The Rock Hopper system is also extremely efficient in Texas rigging, when fishing where the old bullet constantly snags. Preferably as a sliding sinker, but it can also be pegged when needed thanks to Mojo’s Sinker Stop Tool and rubber kit, for applications such as, pitchin' and flippin' tree limbs and rock cover.

The Rock Hopper is ideal for using in front of a floating or neutral buoyant crankbait that just won’t get to the depths where the Big Boys reside. The Rock Hopper can be pegged on the line with rubber or you can use a small swivel as the weight stop. You can play with the leader length between the weight and the crankbait to obtain desired results. Mojo recommends using a Luhr Jensen Patent Pending KlawDad, a crawdad design crankbait, which is ideal for this fishing method in rock and cover. The KlawDad wiggles and makes plenty of noise that resembles the Real Deal. Luhr Jenson offers these baits in some realistic crawdad, fish-catching colors along with a variety of other productive hard baits that they produce and market.

The Rock Hopper has been creating numerous testimonials from all anglers that have purchased and used this New weight system. Its effectiveness is incredible! The ratio of casts and retrieves over most other weights available today, in this bottom environment is 75/1. Yes, seventy-five casts, One loss on an average, without loss of the weight over the current weight you are using. Unless of coarse, it’s a MOJO. Testimonials also revealed include, I USED THE SAME WEIGHT ALL DAY! (Unbelievable). Become a BELIEVER. Give it a vigorous work out! Its Guaranteed!

Stop re-RIGGIN' and keep on FISHIN'!