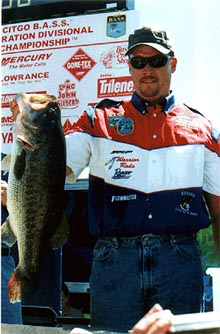 Life deals you situations that can change it in many ways. I have the opportunity to enhance mine from the success that came from winning a coveted seat to go to a very special event. I have qualified to go to the Bass Federation Nationals in 2003, an unbelievable position to be in.

My goals now are to learn as much as possible about the tournemant waters, beat my division and move on to the Bass Masters Classic, the mother of all tournement competitions!

I have been fishing for bass since I was six. I have been a member of the B.A.S.S. since high school and have read about the heros of our sport and have had the dream of one day going to the Bass Masters Classic, as many of us have. To be one step away is an amazing feeling and if you want to know just how close I am, it is down to a 1 and 12 chance at making it, unbelivable and very good odds!

The 2003 Bass Federation Nationals will be held in the great state of Alabama on Lake Tuscaloosa and will be held May 12th threw the 17th. It is a three day competition as top BASS events are. The competition is from around the world so really this is a world wide tournamant event. I am very proud to be in the spot that I am and will try to make the most of it!

What landed me my seat to go to the Nationals was a very fortunate fish caught on the last day, in the last 30 minutes of the Western Divisional Championships held on the delta in 2002.

I had found a big fish area in prefish and the key was being there late in the day opposed to early. The fish would move up on a protected flat and sun themselves in the late day sun. This area produced a 6.8 lb fish for my partner from Montana earlier in the day on a frog but the giants had not yet moved up. As we motored back into the big fish area in the last 30 minutes of the tournament I noticed a huge ball of fry and below it was a huge male guarding them. The fish was probably in the 7lb range. I new I could catch that fish if I didn't spook it, but I did and it headed straight under the nearest dock. I still thought the fish was catchable but with 30 minutes to do it would be a challange. As I was motoring away from the spot where I saw the male I noticed a true giant sitting not 15' from where the male was guarding its fry. I new she was a 10+ and she didn't seem to give a darn that we were less than 10 feet away. I countinue the large circle to give myself room enough to make a quiet pitch to where the big fish was laying. Rigging a 6" senko and using a lot of scent, I pitched the bait to the fish, let it fall and just left it there. 30 seconds later I give it a subtle twitch then leave it some more, I was dead sticking the bait. 45 seconds later without even a twitch of the line the line starts to slowly swim away. I cannot see the fish but pick up gently to feel for weight, I feel it drop the rod and swing for the cheap seats! She's hooked and mad as hell and makes several attemts to break my line which would not be easy as it was new 15lb P-Line CXX. She makes several attempts to run for deep water but I hold her off, then she tries to run me into a dock and I hold her back again. After a brief battle around the boat I get her head up to the surface and put just enough pressure on her to come to the net, she does and barely fits! Praises to God, to my partner and everyone in the area could be heard by me! To catch a fish of this size with so little time left in an event like this was purely a blessing!

I am on my way to the Nationals!!!

Weigh-in was awesome, as I have never weighed in a bass of this size before in a tournament. It was a very special day...