Benton, Ky. – Fall is in the air and with the turning of the leaves throughout the land, the familiar sounds of marching bands, cheerleaders and the roar of a crowd after a big play fill stadiums. As sure as the focus of the American sports fan turns to football, the PAA has found a way to share love of football with fishing fans, as they enjoy the PAA Corporate Cup presented by OPTIMA® Batteries.

As word of some of the best professional anglers in the business gathering at Alabama’s Pickwick Lake began to spread, two of the World’s best football players have announced that they will come to Florence, Ala. to partake in the festivities, both on and off the water.

The PAA is proud to announce that Pro Football Hall of Fame running back Thurman Thomas and five-time Pro Bowl linebacker Cornelius Bennett, a member of the College Football and Alabama Sports Halls of Fame, will not only be in attendance at the Corporate Cup, but will also be competing in the event.

Thomas, who was inducted into the Pro Football Hall of Fame in 2007, spent 12 seasons in the NFL from 1988 to 2000 when he retired with 12,074 yards, the ninth highest total at the time. Thomas was one of the offensive weapons that enabled the Buffalo Bills to make four consecutive trips to the Super Bowl from 1991 to 1994.

Some of Thomas’ other career accomplishments include leading the league in rushing and touchdowns three times, being named to five Pro Bowls as well as being voted the 1991 NFL MVP. He played 11 seasons with the Bills and one with the Miami Dolphins. 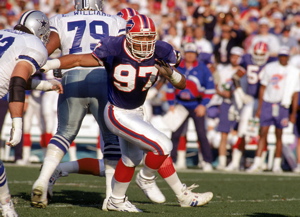 While Thomas ruled the offensive side of the ball in Buffalo, Bennett was a force on the Bills’ defense that helped them win four consecutive AFC Championships and make four trips to the Super Bowl. He was also a member of the Atlanta Falcons that played in the 1999 Super Bowl.

His professional career spanned 14 seasons that included nine seasons with the Bills, three with the Falcons and two with the Indianapolis Colts. He retired from the league in 2000 having recorded 662 tackles, 71.5 sacks and 27 fumble recoveries, including 26 defensive recoveries that ranks 3rd on the all-time list.

A graduate of the University of Alabama, Bennett was a three-time first Team All American for the Crimson Tide. He culminated his college career by being named the SEC Player of the Year as well as the Lombardi Award winner for being the best lineman or linebacker throughout the season.

As football fan, PAA President Tim Horton said that he is excited to be sharing the Corporate Cup experience with these two great athletes. However, as the President of the PAA, he is equally proud that the Corporate Cup presented by OPTIMA® Batteries is having the effect that it is.

“The thought of having Thurman and Cornelius at the event is humbling,” Horton said. “Both of them are avid outdoorsmen, and are looking forward to competing with bass fishing’s best. To have them be interested in being at the event is testament to the reach of the tournament; their participation is great for the fans, the anglers, the PAA, the sponsors of the Corporate Cup, and the fishing industry as a whole.”

About the Corporate Cup presented by OPTIMA® Batteries

The PAA Corporate Cup presented by OPTIMA® Batteries will be held October 9 – 11, 2008 on Alabama’s Pickwick Lake in conjunction with Florence – Lauderdale Tourism. The event will feature a unique format utilizing PAA Tour level members paired with corporate partners sharing the thrill of professional competition. Presented in conjunction with Florence-Lauderdale Tourism, The PAA Corporate Cup will be unlike other Pro-am styled events in that all contestants will be competing for a share of a sizeable purse.

OPTIMA® BlueTop™, YellowTop™ and RedTop™ batteries are now available through leading battery distributors throughout the globe. Consumers should look for the unique colored top and six-pack design that OPTIMA® is known for throughout the world. OPTIMA® has more than 10,000 dealers nationwide and global distribution; for the nearest retailer, consumers can also call 1-888-8-OPTIMA (1-888-867-8462) or visit www.optimabatteries.com.

T-H Marine Supplies, Inc. has been serving the marine industry since 1975. They are a family owned and operated marine supply manufacturer that takes pride in every product that leaves their factory. They are boaters and fishermen who design products for boaters and fishermen. Find them on the web at: www.thmarine.com

Vicious Fishing is a family owned company from Dora, Ala. who manufactures premium co-polymer, fluorocarbon and braided fishing lines for fresh and saltwater use, as well as a line of soft plastic lures. The company also licenses and markets many other products in conjunction with other manufacturers through the Vicious brand, believing that all parties can benefit from the strength of a united marketing, sales, and field staff/tournament team to quickly reach consumers. Visit www.vicious-fishing.com to find out more.