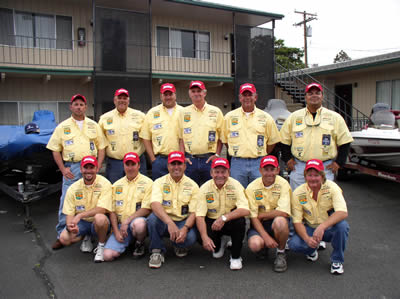 The launch site for this spectacular three day event was Umatilla Oregon, some 292 river miles (and 3 dams) east of where the river meets the Pacific Ocean. The Columbia River is home to a variety of species, which include not only Largemouth and Smallmouth Bass, but also Sturgeon, Walleye, Salmon and Steelhead.

I was fortunate to join anglers Tony Thomasy and Steve Shaffer on this wonderful body of water prior to the official pre fish and got a taste for the high energy, excitement, and hopefulness that accompanies this level of competition. “This is what we’ve been fishing for” said Tony, who characterized this as an experience of a lifetime. “It’s a chance to really prove yourself”. Out on the water was just about as exciting as fishing gets. I’m out there with my best friends, feeling their energy of what’s just around the corner, and hooking up to some gorgeous river smallies. “Typical smallmouth patterns for a river” Tony kept saying as we fished various locations over three days together. The fish were really aggressive and hit hard. We used my boat for practice, and we were really glad I had a Lowrance X19C graph with GPS and the mapping software. Navigating the river can be quite a challenge with solid rock islands out in the middle where you least expect them. Several anglers throughout the competition beached their boats and tore up props. With the Lowrance X19C, we were able to run the river following the deep water channel markers (thanks to the downloadable software mapping), and when we needed to slow down and traverse unknown water, the graphs’ “trails” feature left a cookie crumb trail that later allowed us to move along quickly and safely.

Competing in the divisional has an interesting twist to it. One the one hand, your competing as a team representing your state, and as such you want to pool your knowledge, share what your learning in pre fish, and work together for the common good towards winning the top team. The higher the standings in the team categories, the more prize money too. Each participant of the top three teams takes home a trophy too (a pretty nice one at that). Then, there is the individual element. Like any tournament there is first place, with it’s trophy. Lastly, but the goal of every angler, is to be first place for your state, which earns you this awesome trophy and most importantly the opportunity to represent your state at the next level, the 2006 Federation Championship, and with it the possibility to fish the 2006 Bassmasters Classic.

When I arrived later in the week for the final weigh in day, you could just see “the moment” in every anglers eyes. The excitement about who’s team would take top honors, which of their members would take the coveted spot and advance to the Federation Championship. There was also a great deal of camaraderie throughout. It seemed universal the amount of mutual respect between all the anglers, and the positive experiences anglers fishing with anglers from other states and walks of life had experienced. This level of fishing is clearly an entirely different experience, an almost bigger than life experience, and the caliber of those competing was clearly evident. Chris Bowes of B.A.S.S., who was up on stage announcing the weights of each angler kept repeating the theme of how the Federation is the grass roots to the Classic, that this is what it’s all about. The way the average angler could earn their way to fish the Classic.

As the dust settled and the weights were all in, California came in with a three day team total of 310 pounds 3 ounces taking fourth place, a mere 5 ounces short of third place. Mark Schroeder of Red Bluff California came in with a three day total of 30 pounds 6 ounces to win California’s position at the Federation Championship in 2006, and was tied for second place overall in the tournament. In 2nd place was John Silberbauer from Modesto with 35 pounds 6 ounces, 3rd place was Lee Miller of Fresno with 34 pounds 14 ounces, and 4th place went to Cameron Smith of Dana Point with 33 pounds 1 once.

Each member of the California team received two gorgeous tournament shirts, with their names embroidered on them and the various sponsors patches. They had team meetings each evening, and were provided “incredible banquets”. All the anglers expressed profound thanks to the Oregon Federation volunteers and Federation sponsors who made the event such a positive and memorable experience. 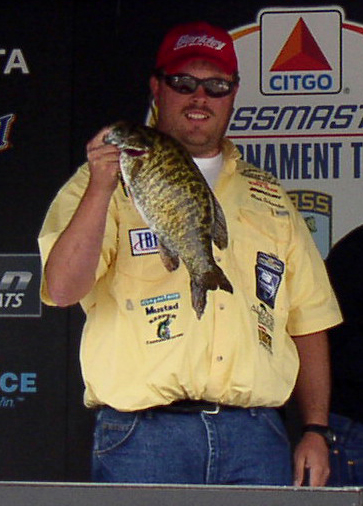 Congratulating Mark Schroeder for his victory as California champion, looking into his eyes and seeing the pent up emotion within and being there with the guys at the weigh in and sharing their excitement was something that will stay with me a very long time. It’s fostered a new hope and a new goal for my own fishing, and even just being a spectator it has given me a story to share with others out there on the waters.