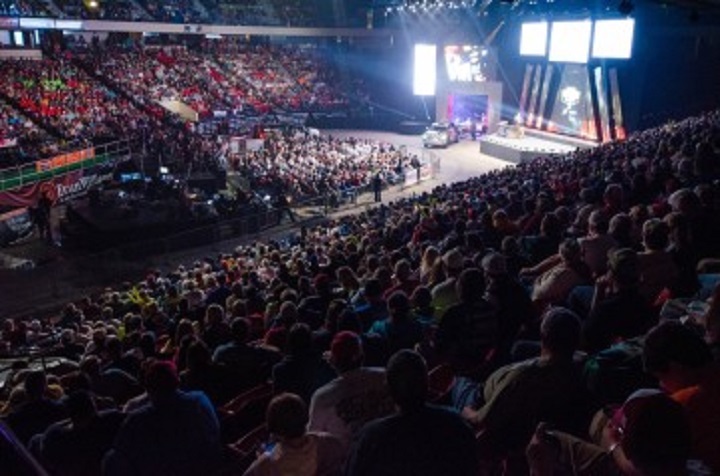 BIRMINGHAM, Ala. — The GEICO Bassmaster Classic — the Super Bowl of Bass Fishing — is not only a must-attend festival for fishing fans, but it is also the crown jewel in a professional angler’s career.

For some, just qualifying for the most prestigious event in bass fishing is a dream come true. For others, being in the field is the next step in building a career as a pro. And for the fortunate few who have won it, it is the crowning achievement of a career.

Feb. 20-22, 56 anglers will converge in Greenville, S.C., to compete for the title of Bassmaster Classic champion and a share of the $1 million purse. Fifty-five of those qualifiers have been determined. The remaining slot will be filled during the Toyota Bonus Bucks Bassmaster Team Championship to be held on Lake DeGray, Arkansas, Dec. 9-13.

The 2015 Bassmaster Classic returns to Lake Hartwell, having been previously contested on the border impoundment between South Carolina and Georgia in 2008. That year, Alton Jones of Lorena, Texas, claimed victory in dramatic fashion.

Recently at the 2014 Old Milwaukee B.A.S.S. Nation Championship held on the Ouachita River, Connecticut competitor Paul Mueller bested the rest of the field by a significant margin, taking home the Bryan V. Kerchal Memorial Trophy and his second berth in the Bassmaster Classic. At last year’s Classic, Mueller weighed in a whopping three-day total of 66 pounds, 8 ounces for a second-place finish in his first Classic.

Mueller, who represents the Eastern Division of the B.A.S.S. Nation, will be joined by two other repeat qualifiers from 2014 — Coby Carden of Alabama and Jeff Lugar of Virginia. Three Classic rookies qualified through the championship as the highest finishers within their respective divisions: Teb Jones of Mississippi, Steve Lund of Arizona and Troy Diede of South Dakota.

Along with the yearly points qualifiers, seven other anglers qualified by winning an Elite Series event in 2014 and Bass Pro Shops Bassmaster Opens pro Jacob Wheeler qualified by winning the inaugural BASSfest. Along with those win-and-you’re-in berths from the Elite Series, seven anglers from the Bass Pro Shops Bassmaster Opens presented by Allstate also earned the same distinction by winning an event in their division. Two Opens division spots were rolled to the Elite Series points because the champions did not meet the requirement of fishing the entire three-tournament division.

In addition, Brett Preuett of the University of Louisiana at Monroe qualified for the Classic through the Carhartt Bassmaster College Series Championship and Classic Bracket competition.

All told, with double qualifiers included, the Top 40 pros from the Elite Series and Toyota Bassmaster Angler of the Year standings have qualified for the 2015 Bassmaster Classic.

The competitors will take off daily from the newly renovated Green Pond Landing facility on Hartwell near Anderson, S.C., and daily weigh-ins will be held in Greenville, S.C., in the state-of-the-art Bon Secours Wellness Arena. The ever-popular Bassmaster Classic Outdoors Expo presented by Dick’s Sporting Goods will be held at the 260,000-square-foot TD Convention Center, also in Greenville.

Here are a few interesting facts about the 2015 Bassmaster Classic:

The 2015 championship marks the first time in 24 consecutive runnings of the event that four-time Classic champion Kevin VanDam will not be in the field. His absence ends his pursuit of Rick Clunn’s record 28 consecutive Bassmaster Classic appearances.

For the first time, two “defending champions” will be in the field together. Each year, the angler who won the previous year’s Bassmaster Classic earns an automatic berth into the next year’s event. This year, not only will the 2014 champion Randy Howell be in the tournament, but 2013 winner Cliff Pace — who was granted an exemption for a serious injury shortly before the 2014 Classic — will also be in the field.