BIRMINGHAM, Ala. — After finishing second at the 2021 Bassmaster B.A.S.S. Nation Kayak Series National Championship powered by TourneyX on Texas’ Possum Kingdom Lake, angler Joe McElroy from Cullman, Ala., announced he was donating his $5,000 winnings to help a fellow competitor’s young son who is living with a rare disease impacting just five people worldwide.

“Sometimes, it’s about timing,” McElroy said. “I was in the right place and had the opportunity, so it just came together.”

According to SaveJT.com, the website that Borofka and his wife Tara run, fewer than 70 TPI Deficiency cases have ever been reported, so information is slim. The site states that J.T. is the first person in his birth state of California to be diagnosed with this disease. Currently, he is one of five people worldwide known to have TPI.

A seasoned angler originally from Salinas, Calif., Borofka uses his tournament platform to raise awareness for this disease and to generate support for his son’s ongoing medical needs. Noting the ongoing medical needs, he directed anyone interested in helping to the family’s informative/fundraising website.

McElroy was so moved by what he heard that he didn’t hesitate to follow his heart.

“The prize money was a gift and a blessing to me from God, and I wanted to pass it on,” McElroy said. “I had not met Jason until we had the Top 10 meeting; I heard his appeal for help just moments before when he accepted his seventh-place award.

“Jason was overwhelmed and thankful. He was very appreciative.”

Borofka recalls the breathtaking moment: “I was on the sidelines standing there with my family when he said that, and I was like, ‘What?!’ I was totally blown away.”

But the story doesn’t end there. Barely three months into their move to the Lone Star State, the Borofkas are finding Texas a welcoming and supportive community. Since that emotional moment onstage at the Bassmaster Classic, offers of promotional support and vital financial contributions have flooded the Borofkas due, in large part, to McElroy’s initiative.

“It was awesome because he really inspired a lot of people,” Borofka said. “A lot of people from the Dallas-Fort Worth area have contacted us wanting to help. My phone has been blowing up.

McElroy's donation also inspired TourneyX, other anglers and various organizations to create the Save JT Benefit Tournament, an ongoing virtual event that has already raised more than $42,000.

The Bassmaster B.A.S.S. Nation Kayak Series will feature three more tournaments in the 2021 season as anglers from around the country attempt to qualify for the 2022 National Championship which will be held in conjunction with the 2022 Bassmaster Classic March 4-6 in Greenville, S.C. Learn more at Bassmaster.com/kayak. 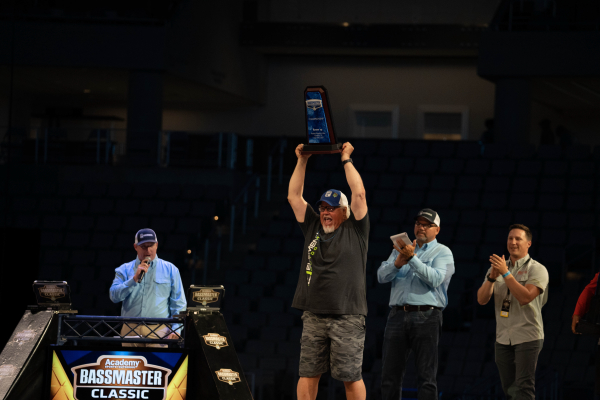 Kayak angler Joe McElroy, of Cullman, Ala., donated his winnings from the 2021 Bassmaster B.A.S.S. Nation Kayak Series Nation Championship powered by TourneyX to help the son of another competitor. Photo by B.A.S.S.