When avid angler Jon Urban first started thinking about landing a state record fish, he was hoping for a white crappie. After all, beating the current 14.25-inch catch/release record seemed doable. After several trips, he finally landed a big one - but not his original target species. To his surprise, the big fish he landed was actually a black crappie - but no problem - it was still big enough to earn a new catch-and-release state record! 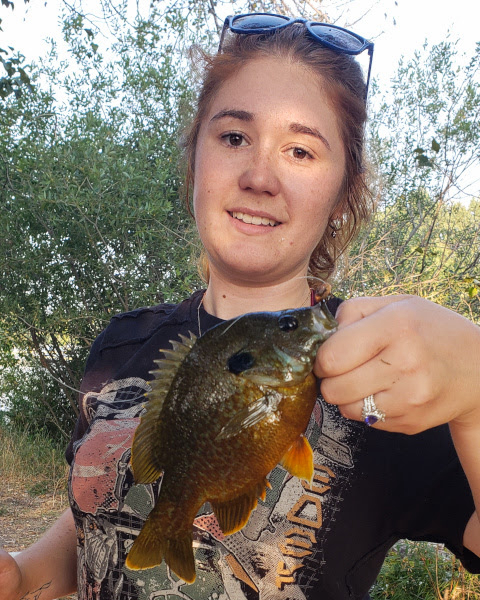 After his initial success, Jon became motivated to chase more state records. Teaming up with his daughter Hayleigh, also an avid angler, the pair have set off on a mission to fill in the blanks in the record fish list. Jon introduced his daughter (and son) to fishing when she was just 5 years old.

"We have been fishing together for 18 years. What we like most is we're family, so it's something we both love and can do together," he said.

Jon and Hayleigh began searching local ponds for green sunfish - a species less common than typical the bluegill and pumpkinseed found in most Idaho ponds. With a little homework and a bit of luck, they not only found an 8-inch green sunfish, but also caught a 6.25-inch green sunfish/bluegill hybrid, clinching two vacant records in the process.

More recently, Jon noticed the state record list did not have an entry for Lahontan cutthroat trout, one of four sub-species of cutthroat in Idaho. While not native to Idaho, they have been stocked in a few remote high desert lakes in Owyhee County. After researching the fish stocking records, Jon and Hayleigh set off to find the elusive Lahontan cutthroat. In early September, they found success at Grasmere Reservoir, and submitted the first record application for Lahontan cutthroat. The angling duo caught several Lahontans, earning both a 1.17-pound certified weight record, as well as a 15.25-inch catch/release record.

When asked who is the better angler, Jon thinks it's more about how fishing is a way to make new discoveries.

"We get competitive with each other sometimes, but what we like most is discovering, exploring new waters, and catching new species regardless of size," he said.

When it comes to getting kids interested in fishing, Jon recommends getting started on panfish.

"I started out by taking Hayleigh to catch bluegills and crappies - fast bites and big numbers to keep them busy. I find it gets them really excited about fishing by giving them a lot of confidence early, and the patience comes later when they get the basic skills down," he said.

Congratulations to Jon and Hayleigh Urban of Eagle on an outstanding summer of hooking state records!