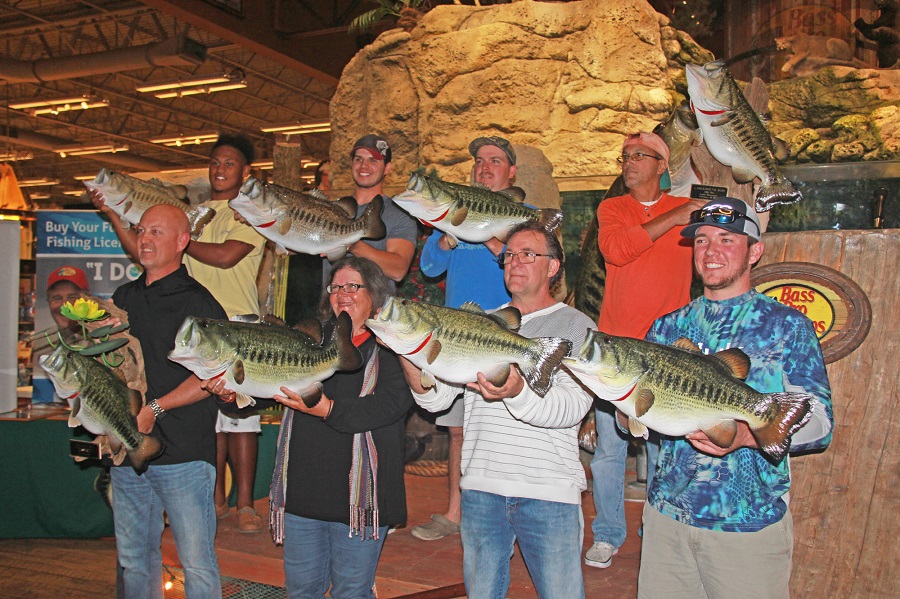 The Florida Fish and Wildlife Conservation Commission’s (FWC) TrophyCatch program celebrated five years of bass conservation at its annual Hall of Fame ceremony held at Bass Pro Shops Outdoor World in Orlando. In the past five seasons, TrophyCatch has awarded prizes for the catch and release of more than 6,868 largemouth bass.

“We want to thank all of our partners and anglers for their commitment to conservation,” said Tom Champeau, FWC’s Director of the Division of Freshwater Fisheries Management. “We now have 47 Hall of Fame anglers in the TrophyCatch program, and this event honors their skill in catching a bass of a lifetime and submitting their data to the FWC to assist in the management of our trophy bass fisheries.”

Sixteen Hall of Fame anglers were recognized for their catch and release of a largemouth bass weighing 13 pounds or heavier in Florida. The Hall of Fame anglers each received Bass Pro Shops gift cards, Spiderwire merchandise, a custom fiberglass replica mount made by New Wave Taxidermy and a plaque from American Registry commemorating their catch. The Season 5 Champion, Dominic Montalto, received the TrophyCatch trophy for catching and releasing the heaviest bass of the season at 16 pounds, 12 ounces, caught in a neighborhood pond in Lee County.

The TrophyCatch “Big Bag Prize” was awarded to Arthur Jackson for his catch and release of the most bass with the heaviest combined weight in Season 5. He caught and released 16 bass with a total combined weight of 141.625 pounds. Jackson received a Shimano prize pack, along with a Lake County Tourism prize pack of a three-day, two-night stay in Lake County with a guided fishing trip with professional angler Tim Frederick.

TrophyCatch is a partnership between FWC biologists, anglers and fishing industry leaders such as Bass Pro Shops, that rewards the catch, documentation and release of largemouth bass weighing 8 pounds or heavier in Florida. In order to be eligible for prizes, anglers are required to submit photos or videos of their catch to TrophyCatch.com, showing the fish’s weight on a scale, before releasing it back into the water. FWC biologists use TrophyCatch data for bass research, to make informed decisions about the management of Florida bass fisheries and to promote the catch and release of trophy bass. TrophyCatch is supported by many generous partners, such as Bass Pro Shops.

The FWC encourages anglers to join TrophyCatch as citizen-scientists that assist in fisheries management and the conservation of Florida’s lakes and rivers. A new TrophyCatch mobile app is available for download on both Apple and Android devices. For more information about the TrophyCatch program, email Amber Nabors at Amber.Nabors@MyFWC.com.