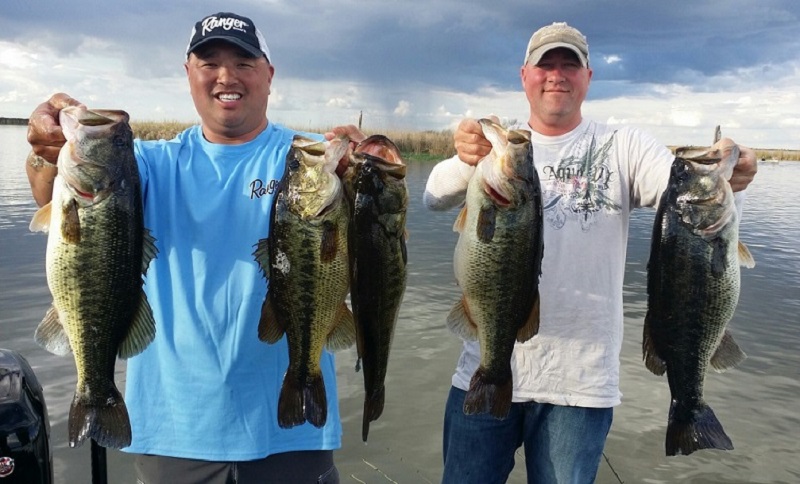 Only a week after their win at the ABA Lucas Oil Team Open, Ken Mah and Jason Austin returned to the California Delta to claim victory in the ABA Delta Region event this past Saturday with nearly 32 pounds for the day.

Mah chalked up the team's continued success to good decision making. "It isn't a spot, it's not an area, it's not one bait," he said. "It is just about having an idea about where the fish want to be right now. It seems that a lot of guys are fishing where they are going to be, but not where they are at now."

THIS WEEK VS. LAST WEEK

He explained by reiterating points of Lucas Oil Open interview . "Practicing a couple of weeks ago, I was in the usual 3 to 6 ft range and the biggest fish I got was a four pounder," he continued. "This weekend, four of the five bites we weighed came in 7 to almost 9 nine feet. That depth is really the only common thing between the events; but that depth is not where they will be in six to 10 days."

Similar to day two of the Lucas Oil Open, the team had to burn gas to fill the livewell. "Last week we used about 10 gallons on the first day and on the second day almost 30," he recalled. "This week it was about 23 gallons for the day, so it took a lot of running around again."

LESS THAN AN HOUR IN

Two of their weigh fish came in areas they had found them in the week before,

The team caught more than a dozen fish for the day, most of them within the first hour as the tide was on the incoming. "It was insane," said Mah. "I remember looking at Jason and telling him that we had been fishing 43 minutes and already had almost 25 pounds. Obviously, we were on the right stretch at the right time, throwing the right bait."

A 1/2 oz, green pumpkin ChatterBait with a contrasting Sweet Beaver in Penetration accounted for four of the weigh fish. "The best description of how I was fishing it is to say it was super, super, super slow and the fish that I was catching were barely eating it," he said.

Comparing both events, Mah noted that he didn't catch any fish on the ChatterBait the week before, but found it to be productive in his practice for this week's event. "I caught seven fish with it on Friday," he said. "Six of them were just two to three pounders. Even though there was only one big one, that told me they were biting it. I have been throwing it for awhile this year already and this practice day was the first day that I have had good results with it. Knowing they were finally ready to eat it, the conditions we were having and the potential of the bait is what made me decide to throw it.

Austin made the final cull of the day with a 6.25 that replaced a four pounder. He flipped it with a Sweet Beav in a reddish color and pushed the team over the 30 pound mark.

Their five fish limited weighed in at 31.94 and included an 8.16 big fish. The bested their nearest competitors by more than six pounds.