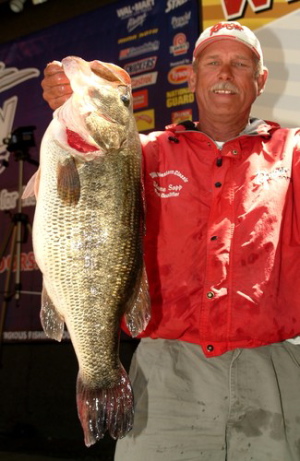 Last month, I had the pleasure of spending a day on the water in my boat with Dee Thomas. It was tremendously enlightening. Well, today, I spent the day on the water with Steve Sapp. WOW! Another learning experience!

Steve started the day the same way as Dee did. They both said for me to go to “my” water and fish it any way I thought was best. Last week, I put Larry Hemphill on some great fish so I started this day with a lot of confidence and went to the same water. Of course the tide was different, so I adjusted as best I could to the different conditions. It didn’t take long for the all-day lesson to begin.

Before I spent time on the water with Dee and Steve, I thought I was a pretty good fisherman. I’m no Delta “rat” but I don’t need a map to run from Hog to Sugar and I’m confident I'll catch a decent limit on every outing. Well, Steve took me to school, giving me pointers on just about everything - rod control, boat positioning, fish positioning in relation to BOTH sun and current, colors, size, rigging, hook set, drag settings...everything. I particularly enjoyed his comments on rigging. He caught most of his fish today on an old fashioned C-rig working outside weed lines. It impressed me to see just how simple he keeps his fishing. Very basic. I also enjoyed his insights about matching certain colors with certain depths. I applied everything he suggested and watched my catch rate and average size improve throughout the day. By the end of the day, my fish were a solid 1-pound higher average! Another thing I found interesting is that at one point, we crossed a bank where Dee and I fished a month earlier. It was fascinating. Steve did not know Dee had been with me on this bank. Yet, both of them described the positioning of the fish in almost identical terms. I guess great minds DO think alike! HaHa!

Steve took me methodically from shallow to deep...42 feet deep at one point! We got bit and/or caught fish in all the layers of water but the size increased right at the depths where he said it would. Its fun when a guy like Dee or Steve calls his shots...“See that point? There’s a fish holding on the down current side just inside the shade line.” Then, you make a cast to the exact spot and hook up on the drop.

Today, we got bit on Yamamoto Kreature baits, Sweet Beavers, frogs, Senkos and Chatterbaits. At one point, I mentioned that the tide was not running the way it should based on the tide charts. Steve was quick to point out that the pumps in the south Delta were dramatically changing the water flow. I told him I already knew that. But, then he proceeded to explain that the San Joaquin is presently flowing at 14,000 cubic feet per minute and the pumps are able to pull over 27,000 CFM. (I’m not sure what the actual numbers were...I just used the 14,000 and 27,000 numbers to illustrate the point). He even told me the individual draw rates for each of the pumping stations in the south as well as their pumping schedules. Like I said, everybody knows about the pumps. But, how many people take the time to study the actual numbers to understand it's impact on the overall fishery? It’s this kind of attention to detail that makes Steve a stand out in Delta fishing.

During our time on the water, we also talked about everything from family health to our experiences in Viet Nam. Steve surprised me when he announced he’s decided to guide on a regular basis. Yes! Steve Sapp is setting up a full-on guide service. In the past, he’s only guided sporadically due to his busy tournament schedule. I asked him why the change of heart. He told me there are two reasons for his decision.

First, as most of you know, his son, Brett, is still recovering from serious medical problems and Steve has been one of his son’s primary caregivers. This cut him way back on the numbers of tournaments he is able to fish. So, he’s available to guide since his pre-fishing schedule has eased up dramatically.

Second, Steve loves competitive bass fishing. He wants to help our sport grow and he feels the only way to do that is to help fishermen become more confident. He’s willing to teach client’s everything he knows. He says you can learn from your own boat or his, your choice. I asked him, “Why would I want to take my own boat on a guide trip?” His response made a lot of sense to me. He said people who go out in his boat usually don’t pay much attention to boat details. They catch fish because of his boat positioning and trolling motor control but they don’t actually “learn” the proper techniques unless they do it with their own equipment. He believes these two boater skills significantly impact success. Dee Thomas told me the same thing. Both Dee and Steve critiqued my boat control in MY boat and their observations have already made a difference in my Delta fishing.

Steve’s guide service will book up fast and his clients will accelerate their Delta education dramatically. He’s already getting calls from B.A.S.S. Elite anglers trying to book him for guide trips before the 2007 Elite event here in our delta. If you’re interested in booking a trip with him, call his cell phone:

Steve will have a full website soon but he gave me permission to let the cat out of the bag early.