With five events behind the WON Bass Delta Teams, 24 boats blasted off at 1:00 p.m. on Saturday from Russo's Marina for their next-to-last stop in this season's circuit. This event was the only evening tournament scheduled this year on the California Delta.

On this cooler than average summer day on the tidal water fishery, the air temp hovered around 90-degrees and the winds were steady most of the day, with gusts up to 20-mph.

The anglers returned to the scales with lighter loads than anticipated and only one team broke the 18-lb mark. Talk of a tough bite or shorts could be heard on the dock; but the proof of their struggles was seen in the standings. 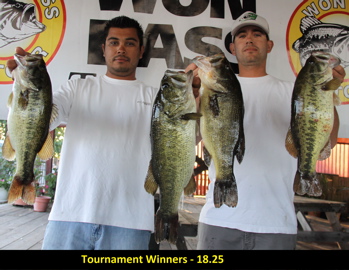 The big bag of the day came from the team of Juan Acosta and Mike Gutierrez. The pair set out for Old River and was pleased as they started off with a 4-lb'r on a Koppers Live Target Hollow Body Frog. They punched their way East with a green pumpkin Beaver and found a few more. As they showed off their best the team said, "We really owe this to one good spinnerbait fish." Their day netted a bag at 18.25 anchored by a 5.13 kicker and over $1900, including options. Acosta and Gutierrez led the field by over 3-lbs.

The 2nd and 3rd place teams were much tighter with Hunter Schlander and Joseph Menegos barely beating out the Barracks, both in the 15-lb range. 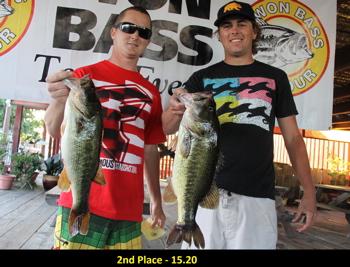 Schlander and Menegos made the trip South. They picked up one on a frog but the rest were found on a dropshot, a Senko and punchin' a watermelon/red plastic with a Paycheck Punchskirt. Commenting on their tight-lipped target the team said, "We just didn't get very many bites; we didn't even cull once." Their grab bag of baits was just what the team needed to take home the 2nd spot and $1170 for their five that weighed 15.20. Their biggest bass in the bag was 5.20.

The Barrack Team, led by Delta Guide Bobby Barrack held up 15.05 to earn 3rd. Bobby and Robby went North for their hunt. Describing the fishing as "brutal" Bobby said, "We punched a lot; but we punched a lot of small fish." Their day turned around with the help of their Snag Proof frogs. They got one just under 4-lbs on Bobby's Perfect and another over 4-lbs with Bobby's Perfect Buzz. The big one came at the last minute of the day; although it was a bittersweet catch as the father and son team lost another big one just about the time they reeled in their best. The lost fish would've made a big difference in their bag. The Barracks banked a total of $600.

As the field drops to 4th place, the weights dip into the 12-lb range. Phillip Burruss and his co-angler the Father of Flippin', Dee Thomas rounded out the limits in the low tens with the 8th spot. 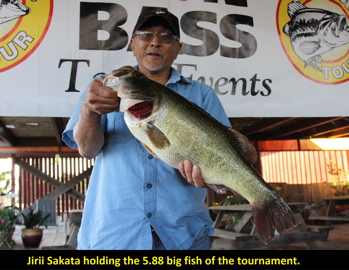 The Big Bass Award went to Tracey and Jirii Sakata. The Sakatas picked up their big bass amongst many others. Their fish were found punchin' tubes and beavers. Jirii commented, "The best color was green pumpkin with red; but really anything with red on it was working." He also shared that they got bit all afternoon and boated about two limits; although most were in the 13-inch range, they were all keepers. At least one hit the quality they were looking for as their biggest came in at 5.88. Their kicker boosted their limit to 12.02 and pushed them up into the top-five. With the Big Bass payout included in their check, the Sakatas claimed $805.

Best of the field:

The WON Bass weigh-in was filmed for a documentary by Billy Chapman from Angler's Inn.

The WON Bass Delta Teams will hold their last event for the season on Septemeber 24, also out of Russo's Marina.