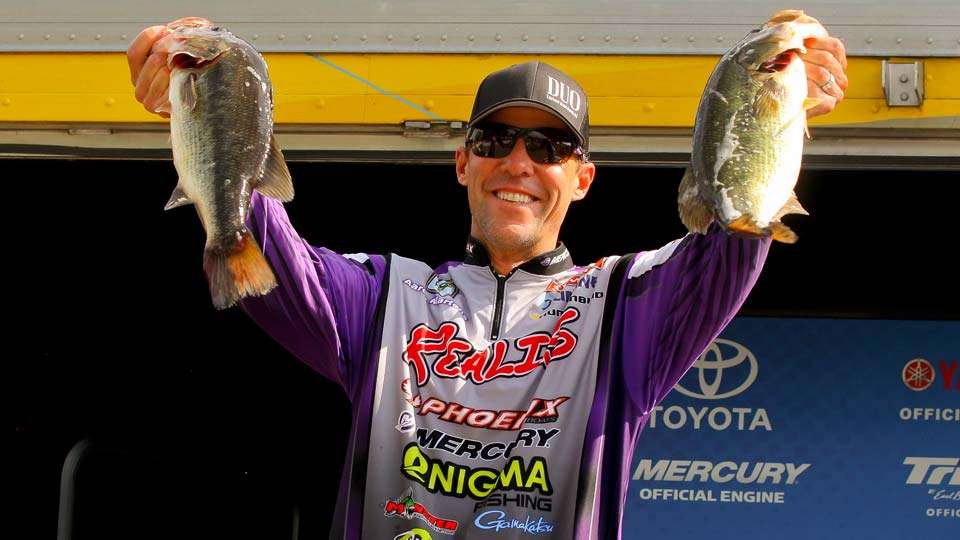 Aaron Martens of Leeds, Ala., takes the lead on the second day of the Bassmaster Elite at Mississippi River presented by Go RVing, with a two-day total weight of 34 pounds, 3 ounces.

LA CROSSE, Wis. — With this tournament being his fourth visit to the legendary Upper Mississippi River, Aaron Martens of Leeds, Ala., is now eyeballing the $100,000 payday as he took the lead at the 2018 Bassmaster Elite at Mississippi River presented by Go RVing.

The water is rising at La Crosse, but it’s not stopped the big largemouth and smallmouth bass from eating with regularity. River levels are expected to remain within the forecasted range: 12 feet high by Sunday, and cresting sometime Monday.

Twelve feet is considered flood stage, which will certainly impact the fishing from day to day.

Regardless of challenging river conditions, Martens posted a fine five-bass limit that weighed 17 pounds, 14 ounces to push him to the top of the official leaderboard with a two-day total of 34-3.

The three-time Toyota Bassmaster Angler of the Year finished in fifth place in 2012 when the Elite Series visited La Crosse, second in 2013 and 30th in 2016.

To say he wants to win here is an understatement.

“I know the winning limit of fish is swimming where I'm fishing,” he said. “I want to prove it this time. But a number of factors are going to have to go my way for that to happen.”

Over the years, he’s spent a lot of time across this vast fishery, and he said it’s an amazing place to come and catch a lot of bass. But his location continues to produce quality fish year after year.

“I keep coming back to the same location when we compete here. I’ve done well fishing in that area every single time, and I see no reason to change my approach,” he said. “It might bite me this time, but right now I'm confident the fish I need to win are there to be caught.”

Zaldain put together an impressive limit that weighed 17-11 pushing his two-day total to 32-7, which was good enough for the fourth-place spot on the leaderboard.

“Chris and I are both fishing for the same fish, but we’re being respectful of each other, and that’s important,” Martens said. “We both want to win, and fishing so closely together will make things interesting for sure.”

The impending floodwaters do not seem to be affecting Martens or Zaldain, but for Randall Tharp of Port St. Joe, Fla., that might be a different story.

Tharp caught 17-12 the second round for a two-day total of 34-2, and will be starting the semifinalson Saturday in second place.

“During practice, and even today, I thought the rising water would hurt my pattern,” Tharp said. “But surprisingly, the fishing was better today. I caught what I weighed in early enough to sit down and eat lunch, a luxury that I don’t often take advantage of during a tournament. I hope my luck continues tomorrow.”

Takeoff will occur at Veterans Freedom Park in La Crosse, Wis., at 6 a.m. CT, and weigh-in will move to Valley View Mall on Clinton Street for Saturday and Sunday and begin at 3 p.m.

The Bassmaster Elite Series Outdoors Expo will be held in conjunction with the tournament. It will take place at Valley View Mall on Saturday and Sunday beginning at noon. The event will feature boat demo rides, an aquarium, free prizes and the latest fishing products on the market. The Rock-N-Ribs Festival will also be happening at Valley View Mall along with concerts, food and the bbq competition. All activities are free and open to the public. For more information, visit Bassmaster.com.