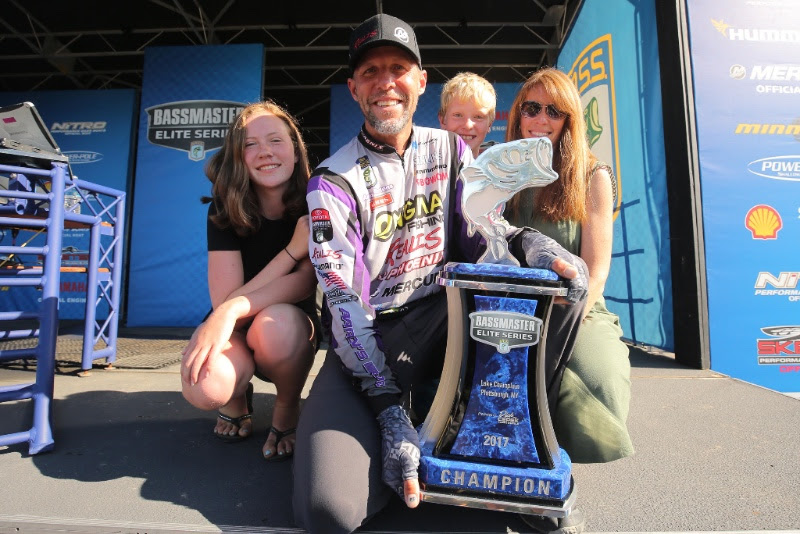 Aaron Martens of Leeds, Ala., won the 2017 Bassmaster Elite at Lake Champlain presented by Dick Cepek Tires & Wheels held out of Plattsburgh, N.Y., Sunday, with a three-day total weight of 58 pounds, 12 ounces.

PLATTSBURGH, N.Y. — Nobody thought it was possible, Aaron Martens least of all. But on the final day of competition at the Bassmaster Elite at Lake Champlain presented by Dick Cepek Tires & Wheels, Martens massed a 23-pound, 5-ounce sack of bass and stunned the crowd, and the field, who all thought such a feat was impossible. He edged second-place finisher Seth Feider of Bloomington, Minn., by a little less than a pound.

“I'm still in shock,” Martens said, surrounded by reporters behind the stage, trophy at rest beside him on a chair. “I can’t believe I won. It still hasn’t set in yet.”

Martens, originally from California but now a resident of Leeds, Ala., wasn’t sure how much his limit weighed — it’s difficult to judge weight at a tournament where winners can be decided by ounces. But his bag included a 6-2 largemouth that was second only to Seth Feider’s 6-4 bass, which won the Phoenix Boats Big Bass Award of $1,500 for the tournament.

“I didn't know how much I actually had,” Martens said. “The only time all day when I thought I had a shot to win was when I saw 23-5 on the scales. The BASSTrakk (unofficial leaderboard) said I had 20-11. I thought I maybe had 22. But I just didn’t know. I overestimated BASSTrakk the first day, so maybe I got a little gun-shy and underestimated today. I’m still really in shock.”

For Martens, each B.A.S.S. win is a redemption of sorts. He’s widely regarded as one of the best anglers to compete in the modern era of bass fishing, and this marks only his ninth B.A.S.S. win across almost two decades of competition. Alongside those nine wins sit 13 gut-wrenching second-place finishes — four of which were at the Bassmaster Classic and seven were at Elite events.

Martens also set a unique B.A.S.S. mark today: He climbed 19 spots on the final day to win an Elite event — a feat made possible because this weather-shortened event spanned three days, instead of four, and the Top 51 anglers fished the final day, instead of the traditional Top 12.

His winning pattern involved drop shotting a 4-inch Roboworm in Aaron’s magic red color on massive weed flats. The largemouth and smallmouth were mixed together and he caught quality fish of both species, although it was the largemouth that ultimately propelled him to victory.

He fished predominantly deep (20 to 30 feet) the first two days, but moved shallow today into 12 to 21 feet. He made a critical tackle change and switched to a 6'11" medium-heavy rod that allowed him to move hooked fish through the grass and to the boat. He noted that areas with several different weed types were best.

Brandon Palaniuk of Hayden, Idaho, retained his lead in the Toyota Bassmaster Angler of the Year race with one event remaining in the season. He was awarded $1,000 for leading at the end of the event.

“I don’t think about the race — I just think about catching them the next day,” Palaniuk said. “Every guy wants to win an Angler of the Year title, but I know for me, mentally, I fish a lot better not knowing where I am in the race. It’s not like I don’t care. It’s more like a racecar driver — if you’re worried about the guy behind you, you’re looking back and slowing down. I’m not going to do that. I’m going full speed ahead.”

Jacob Wheeler of Harrison, Tenn., won the Livingston Lures Day 2 Leader Award of $500 for leading the tournament on Saturday’s second day of competition.

Alton Jones of Lorena, Texas, earned the Power-Pole Captain’s Cash Award of $1,000 for being the highest-placing angler who is registered and eligible and uses a client-approved product on his boat.

The Adirondack Coast Visitors Bureau and the City of Plattsburgh hosted the event.