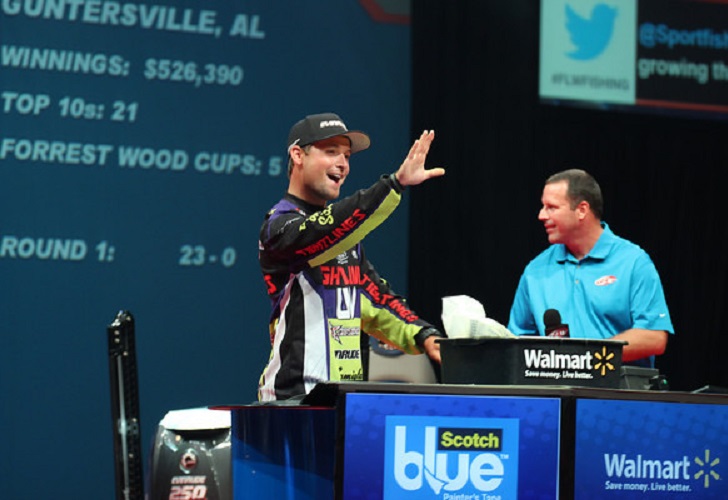 A mere 2,354 miles is the distance from Folsom, Calif. to , Ala., but the two cities might as well be separate countries. They are like and the ; they both speak the same language (kind of), yet their customs, perspective and people are generally a little different. Justin Lucas is the latest in a long line of bass anglers to migrate from the West Coast to the Southeast, making that move from Northern California to Northern Alabama with the hopes of forging a long career in professional bass fishing.

Some of the top bass fishermen in the world have roots in the West Coast and Justin Lucas thinks that is not a coincidence. The reason he believes this happens is the diversity of the fishing. “The thing that prepared me the most for fishing at this level is all of the travel I did fishing the Future Pro Tour with my grandfather. We would have tournaments on Berryessa, , the Delta, Shasta and Oroville; and all of those are completely different fishing styles,” said Lucas. He believes Northern Alabama and offer some of the same levels of diversity and feels that that is why great anglers come from those areas as well. “The other thing about the West is we fished all of those lakes, but down here there are so many good lakes and some of the team trails will fish one lake the entire time. Some guys who live on Guntersville never have to leave there and maybe they will go as far as Wheeler Lake a few times a year, which is the next closest lake,” adds Lucas.

The West Coast is known for two extremes in bass fishing, the ultra-finesse techniques and the super-sized swimbait. Justin Lucas has used both of them to his advantage when fishing across the country and has done very well with both around his home of , Ala. “The swimbait is without a doubt something that I have brought with me from the West, they are starting to catch on to it though. When I first started fishing some lakes down here with a swimbait I knew the fish had never seen one just by how aggressive they were eating it,” said Lucas.

On the other end of the spectrum, the dropshot is still not heavily used despite it being a well-established and proven technique. “Some of the guys down here will fish all year long with a jig, spinnerbait, crankbait and maybe a worm. There are still people who have never used a dropshot!” added the FLW Tour pro.

On the other hand, there are some things that he has picked up fishing across the country that he wishes he learned sooner. “The swim jig is absolutely something that would crush them at grass-filled waters like the Delta and Clear Lake. I look back and think ‘that would have worked so good there and wish I would have tried it,” reflected Lucas.

It’s fairly well known that bass fishing in the Southeast is more popular and generally more accepted. Justin Lucas was surprised about just how many people fish for bass in . “Dude, it’s insane! There has to be more bass fishermen in than anywhere else, the popularity of things like high school bass fishing down here is crazy,” said Lucas. "The other thing is that the casual fisherman or even the non-fisherman all know about tournament bass fishing and it is a part of the culture in the south."

How the West is perceived?

and the West in general are seen as being innovators and maybe a little different. I asked Lucas what others say about the West and also which lake they would most like to fish.

“They all think what I am using is weird stuff, they can’t figure out why I am catching fish on something like a wacky-rigged worm on a dropshot. It works, but they always think I’m about to do something crazy,” laughed Lucas.

The West does have a good reputation though for producing monster bass and anglers across the country see this. “Everyone wants to go to Clear Lake, they are always asking me what it’s like there. It’s probably what I miss most about Northern California, that and the Delta because any cast can be a 13 or 14 lb fish, or Shasta and Oroville because they are so fun to fish,” shared Lucas. As you can tell Lucas misses many things about Northern California and has not forgotten his bass fishing roots.

Which is better, Guntersville or ?

I decided to put Justin on the spot and ask which lake is better. He was quick to answer , but added a caveat to his statement. “Clear Lake for sure, but if had as much fishing pressure as Guntersville gets, I would say Guntersville would be better. Guntersville gets so much pressure but it is still an awesome lake, each winter I see license plates from all over; Iowa, Michigan, New York and everywhere else,” said Lucas.

That is a testament to how good Guntersville is and also shows that even one of the most popular lakes in California does not get as much pressure as the lakes in Alabama. “Everyone comes down here to fish and the lake still produces giant fish” said Lucas.

Justin Lucas is the latest example of a California-raised bass angler moving to the South to pursue his dreams. Like Aaron Martens, Gary Klein and others before him he has followed his passion across the country, but still takes pride in where he learned bass fishing. His western taught bass fishing skills have translated to the rest of the country and he continues to be a rising star in professional bass fishing.