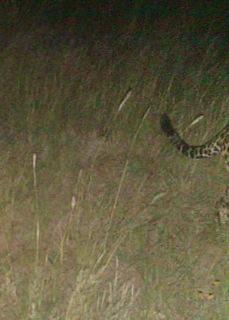 TUCSON, Ariz. - The Arizona Game and Fish Department is currently analyzing a recent trail camera photo of either a jaguar or an ocelot sighted southeast of Tucson.

The photo includes only the tail and a small portion of a hind quarter of the animal, making positive identification more difficult. Game and Fish is now consulting with outside experts about the photo, taken Sept. 23 and submitted by a sportsman, to better identify the species.

"We have definitively determined that it is either a jaguar or an ocelot, but we need to do further analysis of the animal's spot patterns and size to try to positively identify which species it is," said Game and Fish Nongame Branch Chief Eric Gardner.

Four of the last five confirmed jaguar sightings in Arizona have been reported by hunters, who all took responsible action to document the animal and report it to Game and Fish. Sportsmen also provided Game and Fish with two sets of trail camera photos of an ocelot in the Huachuca Mountains in 2012. These hunters have provided biologists with critical information that may not otherwise be known, information that will help increase the understanding of these species' existence in the borderland area.

Jaguars have been protected outside of the United States under the Endangered Species Act since 1973. That protection was extended to jaguars within the U.S. in 1997, the year after their presence in the Arizona and New Mexico borderlands was confirmed.

Jaguars once ranged from southern South America through Central America and Mexico and into the southern United States. It is believed that southern Arizona is the most northern part of the range for a population of jaguars living in Sonora, Mexico.

Ocelots are small to medium-sized spotted cats with a long tail. These cats have been listed as endangered since 1982 under the federal Endangered Species Act.

The present range for ocelots is in the eastern and western lowlands of Mexico, from southern Mexico through Central America and in the lowland areas of Colombia, Ecuador, Peru and Brazil. On the fringes of their range, they occupy a very limited region in both the United States (a remnant population exists in southern Texas) and Argentina. Other animals such as bobcats, young mountain lions and servals, an African cat popular in the pet trade, are sometimes misidentified as ocelots, which is why verification is so very important.

Jaguars and ocelots are protected by the Endangered Species Act and should be left alone. If anyone encounters a cat believed to be a jaguar or ocelot, the Game and Fish Department requests that photos along with observation information be reported immediately to the department or through the Operation Game Thief hotline at (800) 352-0700.