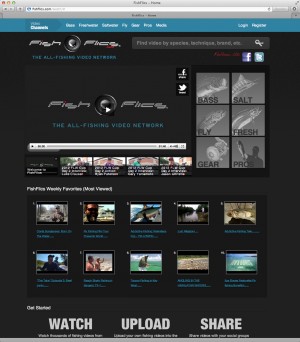 Adventure Advertising, LLC, The Real Enthusiast Agency, is excited to unveil the beta version of www.Fishflics.com to anglers the world over. The 24-hour Internet fishing video network was unveiled in conjunction with the 2012 Forrest Wood Cup world-championship bass fishing event (August 9-12 in Duluth, GA) as the sport’s top pros battled it out for $500,000 in prize money and bragging rights to being the planet’s best bass angler.

In research and development since the spring of 2011, Fishflics.com is positioned to become the number-one destination on the Internet for finding, sharing and watching fishing videos. The interactive site will help avid anglers—as well as industry manufacturers, guides and pros—locate, post, organize, and share new and interesting how-to videos, gear videos, video fishing reports, funny, weird and shocking videos—and everything in between.  Whether anglers aspire to be the next TV fishing celebrity or just want to have a centralized place to watch, organize, store and share all their favorite videos, Fishflics.com has them covered. And, best of all, its free!

“We were thrilled to launch our initial beta version of Fishflics.com at the Cup right in our own backyard last weekend,” states Jason Meninger, FLW Tour pro and one of three Founding Partners of Adventure Advertising. “This has been a labor of love for the entire Adventure team and we couldn’t be happier to provide this tool to everyone who loves the sport of fishing as much as we do. Launching with 1,500+ videos—including original Fishflics programming—within seven organized channels, Fishflics.com is definitely poised to be the clearinghouse for watching, uploading, and sharing the coolest fishing videos that anglers—and the worldwide Web—have to offer,” Meninger continued. “Since we’re in the beta stage at this point, we’ll be looking to build a community of active users that will help us make the site the best it can be in terms of content, functionality and ease of use.”