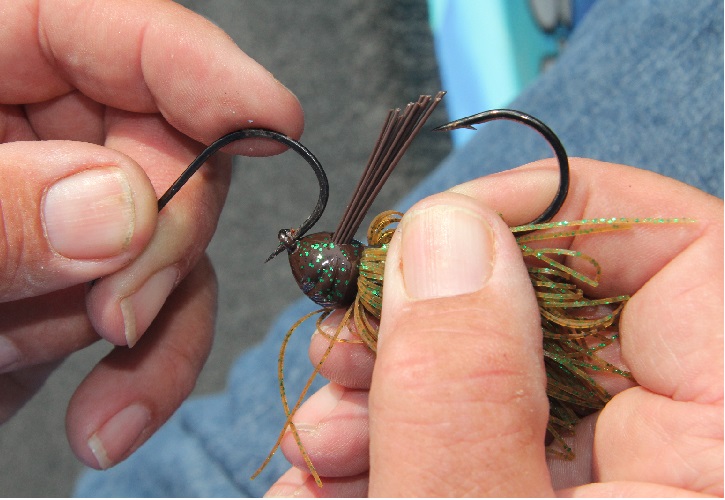 For today's bass angler, there's no lack of flipping jigs and while styles, colors and price points run the gamut, a handful of preparatory steps will help you maximize your bait's performance. Everyone has their favorite tweaks, but for a succinct rundown of proactive steps that anglers can integrate into their personal preferences, we turned to former Bassmaster Elite Series pro and jig-flipping legend Denny Brauer.

A 2-time Bassmaster Classic champion, Brauer has helped design several jigs, including the Strike King Denny Brauer Premier Pro Model. His decades of experience are evident in this jig, but as mass lure manufacturing often finds subtle variances from one jig to the next, Brauer puts each of his through a detailed regimen prior to fishing with it.

SKIRT: Brauer often trims his jig skirt, but he first analyzes the fishery he's facing to determine the appropriate adjustment. On big-fish waters, he'll leave the skirt intact because he'll be using a large trailer that can hold its own. Elsewhere, on lakes with reasonable quality, but not giants on every cast, he puts his scissors to work.

"I'm going to trim my skirt to make it more compact and that way the trailer behind it is more efficient," he said. "This way, the skirt doesn't interfere with the trailer."

Brauer bunches the skirt strands together and trims the skirt to within ¼- to ½-inch of the hook bend. This allows optimal motion for a smaller trailer because it's not overwhelmed by a bulky skirt. A moon shaped cut, rather than a straight line, adds the subtle appeal of a tapered edge.

LINE TIE: "Sometimes there's paint in that line tie and if there is, you really want to take the time to remove that paint," Brauer said. "You can take a hook and move it around in there and clean the inside of that line tie. The last step is to take your fishing line and run it through that hook eye and really polish it.

"If there are any rough burrs of paint in there, you're removing that so when you tie your knot, there's nothing on the backside of the knot that will fray it when you put some (pressure) on it. You're adding that little extra bit of insurance."

HOOK POINT: Driving a hook into the bony roof of a fish's mouth requires optimal sharpness and Brauer has a simple test to see if he needs to hit a jig hook with the sharpener. He'll poke the point of each hook onto his thumbnail and then gently pull outward.

"I'll test the hook to see if it's what I call 'sticky sharp' and if the point wants to slide, I'll take a hook file and touch it up to make it sticky," he said.

RATTLE CHECK: The Premier Pro Model Jig includes an extra-loud, double barrel rattle box for max noise, but if assembly workers leave too much sealing glue inside, the rattles often stick and neutralize the sound benefit.

"I want this thing making all the noise it can make," Brauer said. "I know what it should sound like, so I put it to my ear and test it. If it doesn't sound the way I know it should sound loud enough, I'm going to tap in on something hard to loosen those BB's."

WEED GUARD: A step solely meant for identification, trimming the top corner of his weed guard enables Brauer to instantly recognize the "ready" jigs in his tray. Cutting at a 45-degree angle leaves a distinctive look without impeding the weed guard's primary purpose.

"This really doesn't shorten the back of the weed guard to where the jig is going to get hung up more," he said. "But this is going to be a sign to me that, because that weed guard is cut, that I've already done these other steps to make this jig totally tournament ready. Just remember – the back corner of a weed guard, you want to leave that alone

TRAILER: The decision here is based on seasonal metabolism of predator and prey. Bass are lethargic in cold water, so Brauer prefers the subtle action of a Strike King Chunk. Conversely, when fish are active, the more extravagant appearance of a Strike King Rage Craw does the job.

When he wants a larger profile, Brauer "hangs" a chunk by hooking it through the center. If he wants a tighter package, he'll thread the chunk onto the jig's hook. Now, if the full-size Rage Craw is too much for the scenario, he trims it so the hook fits higher into the body. For proper sizing, he lays his jig hook against the trailer so the bend sits right over the molded eyeballs (the point at which his hook should exit). Pinching the trailer at the point that aligns with the bottom of the jig head indicates his cut mark.

Beyond the jig prep, Brauer leaves site selection to the individual. Follow his steps for jig prep, though, and you'll be in better shape to tempt your next big bass once you dial in your spot.