The Beast Hunter mid-range crankbait, developed by legendary Japanese pro Jun Shoji, is the newest offering in IMA’s power-fishing arsenal. Shoji guides on Lake Biwa, where a record-tying largemouth was caught in 2010. With that laboratory at his disposal, he set out to create a lure that can dominate the 10 to 13 foot range where most of Biwa’s monsters are hooked. He’s succeeded in creating a product that will successfully hunt down those beasts.

The Beast Hunter is a tool that will appeal to experts and novices alike. On a steady retrieve, it can be deadly. Indeed, as fellow IMA pro Bill Lowen explained, it’s tailor-made for beginning crankers: “It doesn’t pull as hard as most other crankbaits in its range,” he said. “There’s not as much resistance so you can really feel what’s going on down there. It also comes through cover very well.” 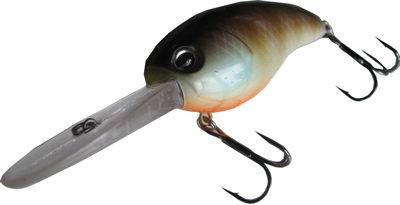 Shoji designed the lure specifically to come through Biwa’s grass without hanging up or losing effectiveness. Unlike wood or rock cover, in grass deflection alone does not allow a crankbait to keep plugging along. One strand of grass on your hooks and the cast is effectively wasted. Accordingly, he had to coordinate the size of the lure’s body with the length and width of the lip. A wide diving lip may push some grass away, but it also causes the bait to wobble more widely, which leads to hang-ups. If it dives too steeply, it likewise will get buried in the grass. But with the perfect balance that the Beast Hunter attains, when the angler feels grass, he need only softly lift the rod tip and the Beast Hunter will glide right over the vegetation.

The relative lack of resistance as well as the lure’s ability to avoid hang-ups are both functions of the Beast Hunter’s relatively thin body profile. Coupled with an oversized lip, deflection becomes second nature. With a very natural wobble – not too wide, not too tight – and no rattle to turn off spooky bass, the Beast Hunter is a power bait that doesn’t overpower the situation.

Shoji’s design also incorporates a small weight inside, which maximizes diving depth while preventing the lure from tumbling and getting fouled on the cast. Every aspect of this lure is made to maximize performance. Even the hooks are shielded by the body and lip to keep it weedless without hampering hooking ability.

Elite Series star Fred Roumbanis has been fishing the Beast Hunter for over a year and said he has literally seen it outfish similar cranks out of the same boat at a rate of five to one. “It’s absolutely unbelievable in the fall,” he said. “I’ve been throwing a perch pattern and absolutely killing the fish. I also expect the shad patterns to dominate.” He said that on ledge lakes like Kentucky Lake and Guntersville it will quickly become a go-to lure for in-the-know anglers. Western anglers can’t live without the crawfish imitating hues. “I can think of several tournaments that I might have won if I’d had this lure in the past,” he concluded.