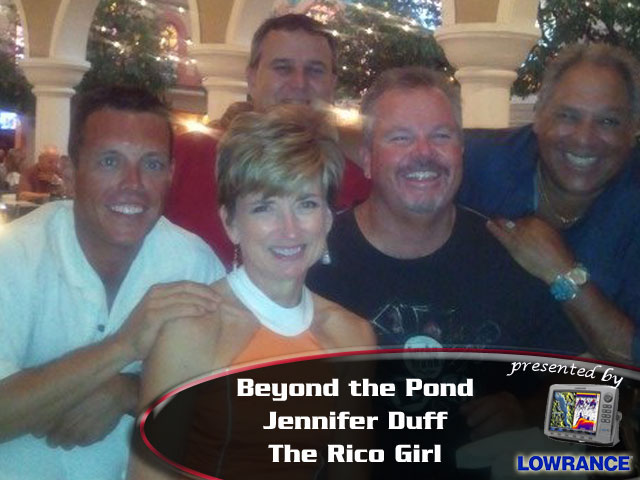 Beyond the Pond - Jennifer Duff - The Rico Girl


A career in the fashion industry doesn't typically parlay itself into a job at a tackle store, an international bass pro or decades of lure manufacturing; but in the case of Jennifer Duff, that is exactly where the appeal of apparel aesthetics led. "I was in fashion - a buyer for a department store and I had a business background, who knew this is where I would end up," remarked the owner of Lobina Lures. "And I've been fortunate enough to be in this business for more than 20-years."

In the mid '80s, Duff's tenure as a fashionista began to burn her out and an outlet from dealing with the daily duds was time on the water. Relishing in the relaxation that fishing gave her soon turned into a more serious note and a competition would soon change the course of her life. "I had been fishing for a short while and had met John Murray," recalled Duff. "He suggested a derby that cost $25 or $50. It was held at Saguaro Lake and lasted four hours. I won and picked up $500. I was hooked and wanted to know if there were more of these to fish."

Murray assured her there were more and turned her on to the bass angling tournament scene. She remembered her beginning saying, "I started working in the tackle store in the evening and fishing what I could. I was team partners with John and had some success. I was fortunate to have some the of best anglers there has been supporting me and there to learn from. I've had a lot of quality time with the best of the best including Bobby Garland and Rick Clunn to name only a few."

A tournament victory with a boat package to the winner in 1987 allowed Duff the financial freedom to turn full-time pro.

The media often highlighted Duff as she was one of the only female pro tournament anglers in the west. "The attention wasn't something I sought out. I just wanted to blend in as 'one of the guys'; but looking back I know it helped get me where I was going," added Duff. "In November 1988, I received an invitation to go to Japan with Gary Yamamoto and fish the Japan Bass
Tournament Association (JBTA) . I went there for a year. I was the only girl and I was an American girl, so I stood out and got a lot of media attention there also."

A year of sport promotion, tournament fishing, seminars and appearances in Japan passed quickly for her. During her stay, she began consulting on lure development and before she returned back to the states, she knew her concentration had changed. "I knew I wanted to continue within the fishing industry; but focus more on developing the business side," Duff explained. "I wasn't really conscious that I was making the switch in direction; but I did know I was uncertain of the level of commitment I was making to a life of tournament fishing. The business background in me came forth and I was setting up accounts and advising for good quality baits to grow American distribution." She launched an export business.

Duff's desire to "blend in as one of the guys" had prompted the circle of male anglers around her to fondly call her Jef. She enjoyed the moniker and utilized it in the formal titling of her export company, Jef International, a business she continues to operate today.

As 1991 came around, Jef International was celebrating a year in the industry when an opportunity to produce the first high-end Japanese lure in the U.S. market came about. "There was one distributer that had 'the Michael' - a chugger bait and all American anglers wanted this lure including Rick (Clunn)," said Duff. "We enhanced them with minor modifications like filing down the mouth and changing out the hooks and the synthetic trailer to a real feather - small things like that; but one Japanese lure designer got a hold of one of the modified Michaels and said let's make it so that there is no fixing it, so it's ready out of the box - and we did. There was the Rico and that's how Lobina got started."

With the influence of Rick Clunn and the assistance of Murray, Lobina launched the Rico and it was a hit. "Everyone thought we were crazy when we released it at $25," noted Duff. "Other lures were selling for under $5 and we were selling this at 5x that price; but we weren't crazy. The first two years there was so much more demand than we could supply, anglers were buying and reselling them for $75. The paint, the detail, the action, the superior components - there was just nothing out there like it and we had it. It made the brand what is today."

Noting that now there are lots of Japanese hard baits that have hit market, Duff said, "The Rico has the most unique spitting action that you can find. The price hasn't changed since that first day and they're still sold for $25 each."

Looking back Duff said this was never where she anticipated her life would end up; she also said at this point she could never imagine it any other way, "I am very tied into the fishing tackle industry. Overall, I've been in the industry for more than 28 years," she said. "The relationships with the people, the foundation is part of me - it is my personal history and the Rico has allowed me a wonderful extension as a woman into the business side of the sport. People may not even know Lobina is woman-owned and it doesn't matter. Through all these years, I am proud to be a female that is still just one of the guys."

There have been changes and advancements in available colors and finishes of the Rico line and most recently Lobina introduced the "Clear Series" with a Hammer Shad finish shown at ICAST, a Klicka Shad finish to debut at the U.S. Open and a Sexy Shad called Risqu