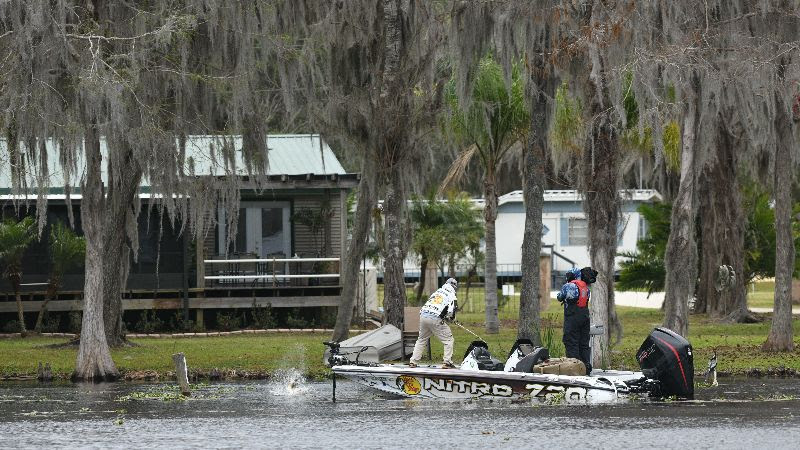 BIRMINGHAM, Ala. — February’s Power-Pole Bassmaster Elite at St. Johns River, which kicked off the 2019 Elite Series season for B.A.S.S., received advance billing as one of the most momentous tournaments in the history of competitive fishing. It did not disappoint.

While local observers predicted bass fishing on the St. Johns would be subpar following ravaging hurricanes in the area, the sun, moon and Elite Series stars aligned to produce a big-bass parade that drew enormous crowds of fans to the Palatka, Fla., weigh-ins.

Bass fishing fans who couldn’t attend or tune in for the 24 hours of Bassmaster LIVE coverage will not want to miss the season debut of The Bassmasters TV Show on ESPN2 Saturday, March 9, at 10 a.m. ET.

“Many people said afterward that the live-streaming coverage from the final round on the St. Johns was the best day of LIVE video ever,” said Mike McKinnis, vice president of media content for JM Associates and producer of Bassmaster LIVE and The Bassmasters. “As a lifelong fan, I can’t disagree. But we’re extremely proud of the episode of The Bassmasters on that event and can’t wait to share it with our viewers on ESPN2.

“Rick Clunn flirted with 100 pounds for four days of competition and took home his 16th B.A.S.S. title. While everybody knows the outcome, scenes of our Elite anglers battling giant bass will get hearts pumping overtime as fans follow the action up-close.”

The St. Johns Elite event was followed immediately by the Toyota Bassmaster Elite at Lake Lanier, Georgia, which produced its own brand of fireworks as the anglers battled huge spotted bass — fish tournament emcee Dave Mercer called “spotopotamuses.” That event will be covered in The Bassmasters program airing the following Saturday, March 16, at 9 a.m.

The back-to-back Elite tournaments provided a perfect prelude to the GEICO Bassmaster Classic presented by DICK’S Sporting Goods, which gets underway next week (March 15-17) on the Tennessee River at Knoxville. The 49th world championship will be covered in special programming airing on ESPN2 on three consecutive Sunday mornings, March 31, April 7 and April 14. These and other Bassmasters episodes will be reaired on ESPN2 and ESPN Classic beginning in the summer, as well as on the Pursuit Channel.

If digital and social media audiences attracted to the opening Elite Series events are any indication, the television programs should be ratings winners.

“February was by far our best month ever in video and social media,” reported Jim Sexton, VP/Digital for B.A.S.S. “Video views on the website and social came in at 4.8 million, which was more than double that of February 2018 and was even higher than last March, the Classic month. And we had 32 million impressions in our social media — another all-time high.”

To create live-stream, on-the-water programming, which was introduced by B.A.S.S. at the 2015 Bassmaster Classic, JM Associates uses up to 10 high-definition cameras to both stream and record fishing action throughout each competition day.

“Condensing more than 200 hours of video into a one-hour TV show has to be a challenge to editors and producers, especially when there’s as much great fishing action as there was on the St. Johns,” said B.A.S.S. CEO Bruce Akin. “I’ve seen a sneak preview of our debut show, and Mike and his team have done a masterful job of telling the story and capturing the excitement. Diehard bass fishing fans are going to love this weekend’s program.”


About B.A.S.S.
B.A.S.S. is the worldwide authority on bass fishing and keeper of the culture of the sport. With more than 510,000 members internationally, B.A.S.S. is not only home to the nation’s premier fishing tournament trails, but it also boasts the most expansive and comprehensive media network in the fishing industry. Its media include The Bassmasters on the ESPN networks, more than 130 hours of tournament programming on the Pursuit Channel, 250 hours of on-the-water streaming coverage on Bassmaster LIVE and 1 million monthly visitors to the flagship website on bass fishing – Bassmaster.com. B.A.S.S. also provides more than 4.4 million readers with the best in bass fishing coverage through Bassmaster and B.A.S.S. Times, and its radio and social media programs and events reach hundreds of thousands each month.