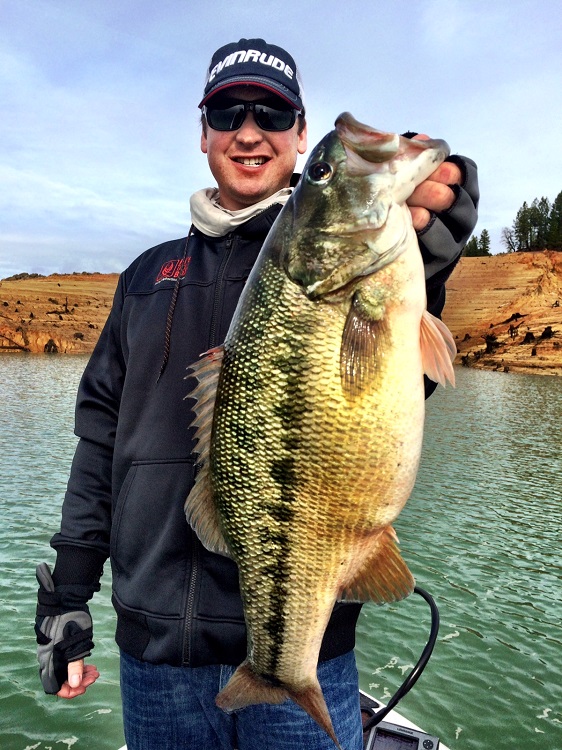 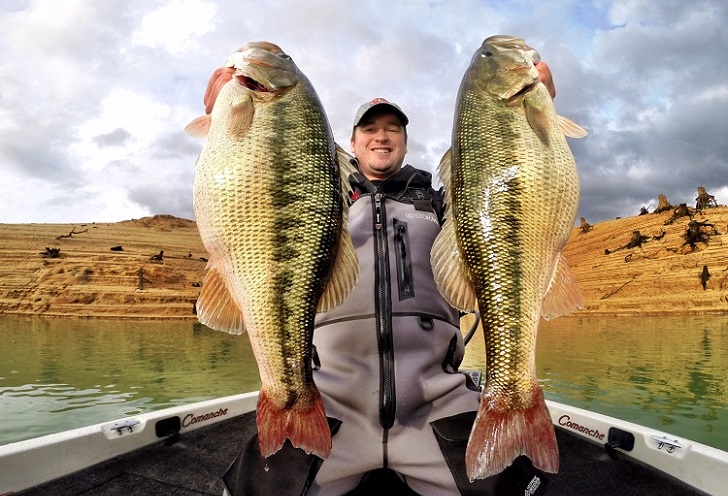 Everyone wants a big spot, and most would greatly appreciate a big spot with lots of big spots. Truth is, though, that those giant spotted bass that California has been pumping out of late aren’t exactly homebodies – you gotta go find ‘em.

FLW pro Cody Meyer knows this well. He’s been on the receiving end of some incredible spotted bass action – the best of which was a mind-blowing 5-fish limit of 42.73 pounds. However, he’s quick to note that you simply cannot assume any day-to-day repetition.

“At the end of the day we pulled up on this point and we were catching a 7- or 8-pounder on every cast. We only stopped because I had a doctor’s appointment. We thought we’d come back the next day and get some Go-pro footage, but we went back and only caught one fish.”

Key here is mobility – the kind that spotted bass display. Yesterday’s bounty can be today’s desert. But putting in your time may lead to a real hay-maker.

“When you find them, you can have a dream day,” Meyer said. “And when you don’t, you’re not necessarily doing anything wrong, you just have to keep moving until you find them. “

GO WITH THE GROCERIES

“California is producing the big spots because of the trout and kokanee,” Meyer said. “They’re so high in protein and so fatty that the spots can eat one or two and they don’t have to use a lot of energy to put on the weight.

Although he knows not every day will yield a limit of 40-plus, Meyer still approaches each spotted bass outing optimistically and he has a game plan for deep fish in 50 feet or more, as well as those roaming shallow in 10-20.

In his preferred scenario, Meyer focuses on the deep stuff, 40 feet or more, during fall and winter, as well as the dog days of summer. Narrowing down the playing field is Job 1 and he does that by finding the buffet.

“The first think I look for is baitfish; whether it’s a lake with only kokanee, or (other forage), they’re going to be around the bait,” he said. “Typically when you idle around and find the bait, you note the depth where the bait is holding and then you want to match the bottom structure to the bait.

“For example, if you find the bait in 50 feet of water and there’s a rock pile that pops up in 50 feet, that’s probably going to be a good place for spotted bass. There in that depth for a reason – either the baits’ feeding on something or there’s a thermocline. It’s really quick way to establish a pattern when you’re fishing deep water.”

That’s important for two reasons: First, time management is always a concern for tournament fishermen and casual anglers alike. You want to get the most out of your day and running around the lake in a blind frenzy is typically counterproductive.

Moreover, Meyer said that the deep fish are usually the tanks.

“On these western lakes, I always say that if you can catch them deep, you’re going to have a ¼-pound bigger fish on average; and at the end of the day, that pound and a half or pound and a quarter difference (in your limit) is going to go a long way,” he said.

“The deep fish are bigger because there’s a lot more bait down there. There may be fish shallow eating crawdads too, but when you find the bait deep, they’re going to be so grouped up, it’s just easy for the bass to stack up and prey on them.”

As Meyer notes, the big spots are well aware of how easy it is to just sit on that deep structure and wait for the bait to come to them.

For targeting deep spots, Meyer’s rig of choice is a dropshot baited with a Strike King KVD Dream Shot worm in a basic shad pattern. It’s easy to fish effectively in substantial depths and when the spots are chewing, the wait is usually short.

Meyer said a close second is a ¾- to 1-ounce football head jig with a Strike King Rage Tail Craw. For those fish with crustaceans on their mind, bumping along the bottom and presenting a plastic with no lack of enthusiasm is a good way to meet a spotted fatty.

“In that deep water, color isn’t all that important because it’s harder for the fish to see in the darker depths,” Meyer said. “That’s why you want something with a lot of action so they can feel it and locate it deep.”

Now, for the times he has to look for spots in shallow habitat of, say 10-20 feet, Meyer feels his best bet is usually on a long point. Here, a swimbait is his search tool and while big models like the classic Huddlestons will certainly catch fish, he does a lot of damage with a 4-inch Strike King Swimming Caffeine Shad.

“I’ll roll up on a point and cover the entire depth range,” Meyer said of his search plan. “Once you find them with the swimbait, you can sit down and fish more effectively with a shaky head and a Strike King finesse worm.”

Wherever he looks for spots, Meyer said that the make-it/break-it element is his electronics. Staying on top of these nomadic fish is no easy task and unless you get eyes on what’s happening down below, yours will be little more than a guess fest.

Case in point: A recent trip found Meyer and a friend, prospecting the bottom in about 100 feet. Dismal were their results until they noticed big marks holding 20 feet down in the water column – not surprisingly, around bait schools. Adjusting the presentations enabled Meyer to target and catch several of these suspenders.

Hard to do that when you don’t know the fish are there. Spots are a sneaky lot, so look for the food, pinpoint where they’re holding and enjoy the slugfest.