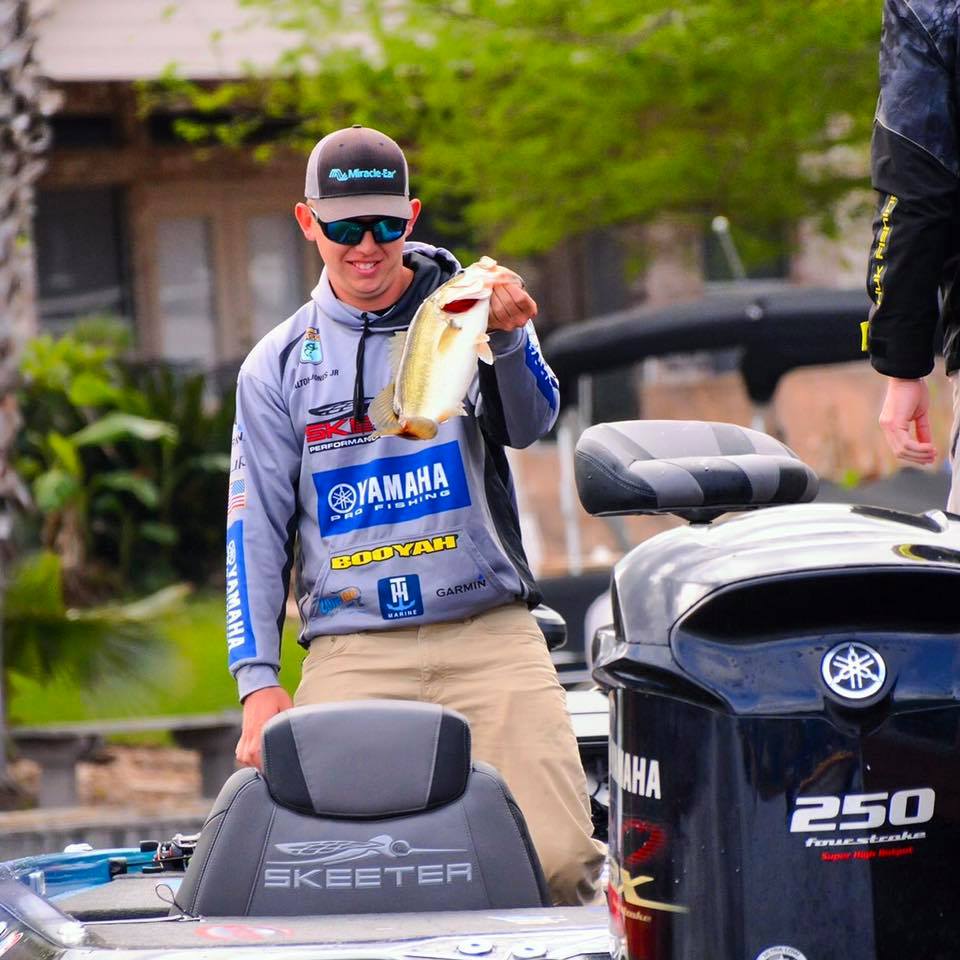 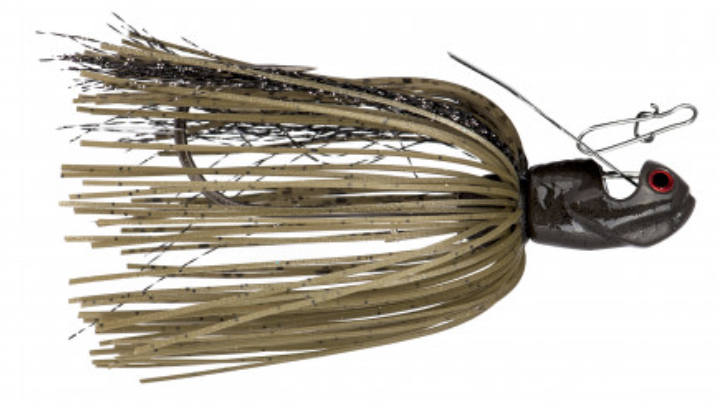 Vibrating jigs have been part of our arsenal for years and they are here to stay. The evolution of this bait category continues every year as manufacturers continue to make them better. Pro angler Alton Jones Jr. believes they are one of the best styles of baits to catch a spring giant.

“Early spring is the best time to catch a big one on the Booyah Melee. It excels once fish start to move shallow and I generally like to use a bulkier trailer to give it a bigger presence,” Jones Jr. begins. He is a fan of craw- type trailers and the Yum Christie Craw is his go-to.

“I keep it simple with colors and generally just use a green pumpkin Melee with a Green Pumpkin trailer. If the water is really dark, I may use Black and Blue,” he says.

“One of the unique things about the Melee is the head design. The blade is actually built into the head,” Jones, Jr. begins. “Typically, bladed jigs have the blade in front of the head and with the design of the Melee, it runs deeper than any other vibrating jig. When you are fishing deeper grass or wood, you can get bait down right in their face and it runs great at slower speeds.”

There are many ways to fish a vibrating jig, but Jones likes to fish it as slow as possible during the early part of the year.

“I fish it incredibly slow. As slow as I can and still get the blade to thump,” he says. “I will also fish it almost like a jig. I’ll raise the rod and feel the kick of the blade and then let it fall back down.” The colder the water, the slower he fishes it.

When it comes to size, the Melee is available in both 3/8 and ½-ounce, but Jones Jr. generally sticks with the one.

“I prefer the ½-ounce size; so, I can get the bait deeper and the fish don’t have to move as much to get it,” he says. “I’ll use the 3/-ounce when I am fishing very shallow water.”

Vibrating jigs are staples for spring bass fishing and Jones. Jr. says the Melee should be in everyone’s tackle bag as it provides a new approach to an old standby.

Fishing the Booyah Melee Late in the Year

Fishing vibrating jigs is often seen as a springtime deal and there is no doubt that it shines early in the year, but many anglers have learned that they are just as effective late in the year.

They can truly be fished during all seasons. Alton Jones Jr. fishes the Booyah Melee often in the fall and changes his approach and more importantly the colors he uses.

READ RELATED: A Square Bill That Talks to The Fish, A Buzzbait That Doesn't Have to Be Buzzed & 7 Other Must-See Innovations

We all know by now that bass tend to key more on shad and other baitfish late in the year as opposed to feeding on crawfish and bluegill. Sure, those colors work in the fall, but Jones Jr. says he primarily fishes a white Melee with a silver blade and attaches a Yum Pulse Swimbait for his trailer to match the look of a fleeing shad.

“The great thing about the Melee is that it has a big, stout hook that fits a variety of trailers. Most of the time I am using a 3.5”, but also sometimes use the 4.5” if the forage is bigger,” he says. “There are also times when I will bulk it up even more and use a 5” Yum Money Minnow. You can still fit a bigger swimbait on the hook.”

The other factor is the noise and vibration from a bait like this.

“The key with these baits is having the blade make contact with the head and since the Melee has the blade built within the head of the bait, it makes a really unique sound,” he shares.

Another change Jones Jr. makes during the fall as opposed to fishing the Melee during the spring is to fish it much faster.

“Generally, I fish everything faster during the fall when the bass are keying on shad. The fish are more sporadic and higher up in the water column, so covering ground is important,” he says.

Jones Jr. uses the same gear for both seasons and likes a 7’3” heavy Kistler KLX Feel N Reel rod with a 7.3:1 reel spooled with 14 to 17-pound fluorocarbon.

Alton Jones Jr. has become a big fan of fishing the Booyah Melee late in the year and says it is one of the best ways to cover ground and capitalize on bass feeding heavily on shad.