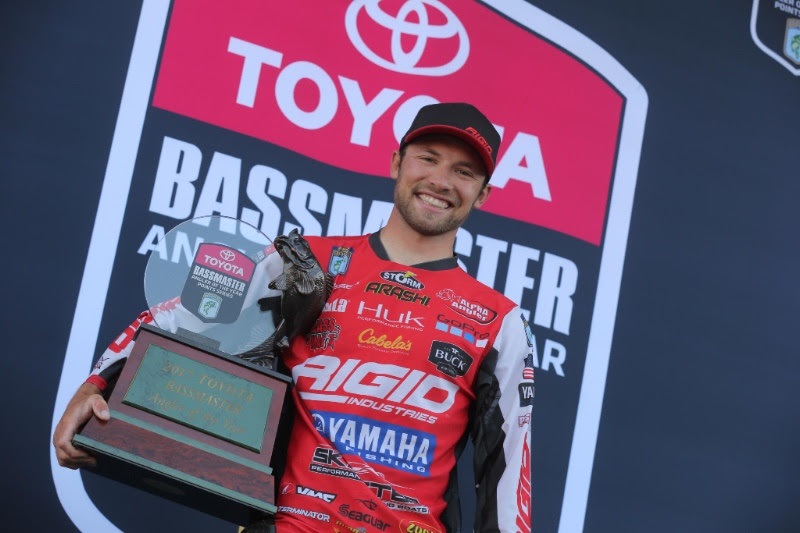 Photo by Seigo Saito/B.A.S.S.
ONAMIA, Minn. — As the 2017 Bassmaster Elite Series season progressed, Brandon Palaniuk always had a sense that he was in contention for the Toyota Bassmaster Angler of the Year crown.

But he never let himself look at the standings. He never even allowed himself to think about the race.

Now, he may never stop thinking about it.

The 29-year-old pro from Hayden, Idaho, caught 62 pounds, 3 ounces of bass to finish in 20th place at this week’s Toyota Bassmaster Angler of the Year Championship on Mille Lacs Lake, Minnesota. That allowed him to finish 14 points ahead of Oklahoma pro Jason Christie and secure his first career AOY title.

“I didn’t know if it would ever happen,” said Palaniuk, who topped Christie by a final margin of 902 to 888 in the AOY standings. “This has been a dream of mine since I was 8 years old. I decided 21 years ago that this is what I was going to do.

“I just made up my mind that I wanted to fish for a living — and every decision I’ve made for 21 years has led to this point.”

Hoisting the AOY trophy was the culmination of a phenomenal season that saw Palaniuk record six Top 12 finishes, including a victory on Sam Rayburn Reservoir. The only time he finished outside the Top 30 in 10 Elite Series events was a disastrous 105th-place showing in the second event of the year on Florida’s Lake Okeechobee.

Palaniuk said he feared that finish might haunt him for the rest of the career — until he worked some late magic during Friday’s second round.

With only six minutes left before check-in, Palaniuk landed a 6-pound Mille Lacs smallmouth that proved to be his biggest fish of the event. He put the bass in his livewell and made it back to the weigh-in with only 40 seconds to spare.

“That’s when I really got the feeling that this was meant to be, and I think that’s why I was so calm today,” Palaniuk said. “When that happened, it gave me a completely different mental outlook on the whole week.

“It was like some light switch went off in my head. I think that’s why I went to bed and woke up this morning feeling like it was going to happen.”

Palaniuk spent the majority of the tournament using a drop-shot rig with a Zoom Super Fluke in the purple smoke color pattern with a 2/0 straight-shank hook and a 3/8-ounce drop-shot weight. He threw the rig on a 6-foot-10 Alpha Angler DSR rod and a Daiwa Exist 2500 reel spooled with 15-pound Seaguar Smackdown braid and an 8-pound Seaguar fluorocarbon leader.

But afterward, tackle and techniques seemed far secondary to his career accomplishment. The $100,000 he claimed with the AOY title pushed his career earnings past $1 million with B.A.S.S.

“When I first started fishing, I was running heavy equipment, cutting trees down and fishing local tournaments,” he said. “I would stash away as much money as I could during the summer from fishing local club tournaments. Then I just had one incredible year in 2010 when I qualified for the Elites when it seemed like everywhere I went in the country I caught fish.

“That’s when it all started happening for me — and that’s what helped me get here today.”

While most of the attention this week was heaped on the battle between Palaniuk, Christie and eventual third-place finisher Jacob Wheeler, the Bassmaster Rookie of the Year race was also decided.

Alabama pro Dustin Connell claimed that title by finishing 24th this week with 60-13. Connell’s closest competition — New York pro Jamie Hartman — had a tough week, finishing in 48th place with 41-7. That allowed Connell to win the ROY race by the thinnest of margins, 765-764.

“I set three goals this year,” Connell said. “I wanted to make the Classic, make the AOY Championship and win Rookie of the Year. Then, I also won a tournament (at Ross Barnett in Mississippi), so this has just been an awesome year.”

Unlike the first three years of the Toyota Bassmaster Angler of the Year Championship, a trophy and prize money was awarded this year to the angler with the heaviest weight for the week. The title of Toyota Mille Lacs Champion and the $25,000 bonus that came with it went to veteran Texas pro Keith Combs, who bested the field with 72-5.

“I’m a Texas guy, and that means I’m a long way from home up here this week,” Combs said. “So, to get to come up here and jack these big smallmouth with a big bait and a big stick was just an awesome experience for me.” The “big bait” was a 1-ounce Strike King jig in green pumpkin with a Rage Craw trailer in the Alabama craw color, which exactly matched the color of crawfish bass had been spitting up in his livewell.

Combs won the Livingston Lures Day 2 Leader Award of $500 for leading the tournament on Friday’s second day of competition. He also won the Toyota Bonus Bucks Award of $3,000 for being the highest-placing eligible entrant in the program.

Each qualifier went home with at least $11,000. Payouts from the $1 million purse were based on the anglers’ final standings in the AOY points race.

Aaron Martens of Leeds, Ala., claimed the $1,500 Phoenix Boats Big Bass Award for a 6-pound, 1-ounce smallmouth he caught during Thursday’s opening round.