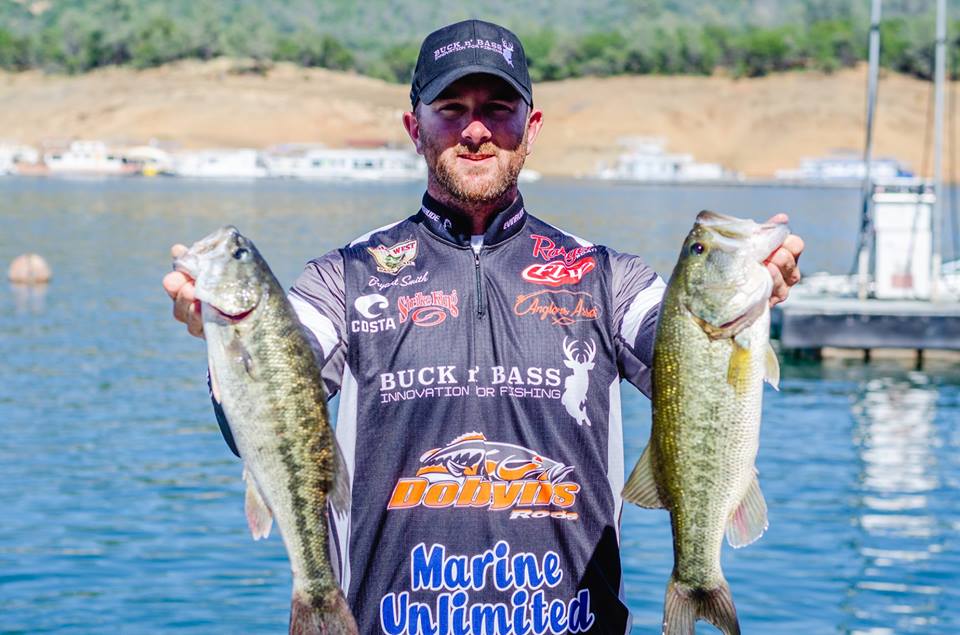 OROVILLE, Calif. – With a wire-to-wire win at Lake Oroville, Bryant Smith of Castro Valley, Calif. once again hoisted the trophy at the Wild West Bass Trail (WWBT) Lucas Oil Championship. Smith put together the victory this past weekend with a tournament-total that went 33.37, surpassing his nearest competitor by more than seven-pounds.

Smith’s accomplishment marks his 2nd WWBT Tournament of Champions victory in three seasons and added over $82,000 to his career winnings with the organization. 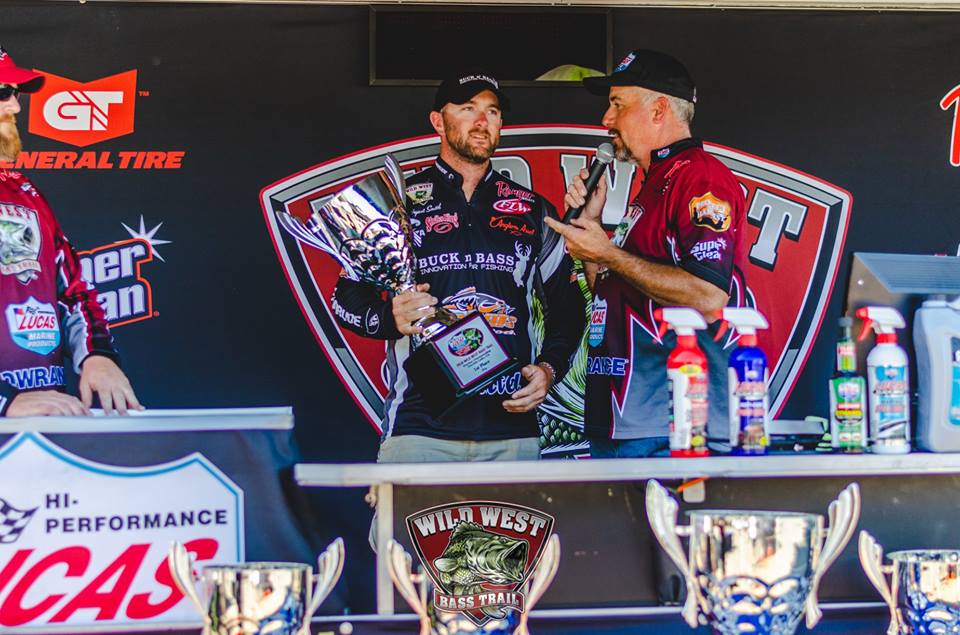 “I don’t really think it has sunk in yet,” said Smith of his achievement.

The Dobyns Rods pro modestly credited luck for getting the right bites during the event.

“I was fishing for the right bigger bites with topwater and I definitely committed to it a good portion of the tournament,” Smith explained. “I put my bait in the right places as many times as possible. I know I was not the only one doing that; but I was fortunate enough to do it and get the right bites.”

Smith climbed to the top of the leaderboard on Day One with 15.08, a lead of over five-pounds. He extended the gap to over six on Day Two, even after weighing only four of a five-fish limit for 10.53. He capped the event with a full sack that went 7.76 on the final day.

Smith ran what he described as “at least 30 spots” through the south and middle areas of the main lake to collect his weigh-fish each day.

“I would go back around to each spot three to four times a day,” he said. “In practice, I learned I couldn’t just go down a bank and get bites. I had to really pick apart certain targets.”

Smith’s “certain targets” included anything that stood out in his areas.

“I hit anything that looked different on a stretch of bank – the high percentage spots only – an isolated rock, a tree, a bush, a mud bank with one big rock, a sand bank with a piece of wood – anything that the fish could hold on, he explained. “

Rotating through three different types of lures, Smith used a combination of topwater and down baits.

“I went through two or three different Spook-style walking-type baits, mixing it up depending on the wind,” revealed Smith. “I used one that made a little more commotion, when there was chop on the water and one that was a little more subtle, when it was flatter and calmer.”

The walking baits accounted for seven of his 14 weigh fish for the event.

His biggest bass over the three days was a five-plus caught Day One. It fell to a Strike Ocho in a natural green color. This five-inch plastic worm landed three of the bass that went to the scales on the first two days of competition.

“I fished it weightless and wacky-rigged, just lettin’ it fall real slow,” he recalled.

After the top-10 field cut, Smith made a final change for Championship Sunday.

“The last day, I fished a five-inch red worm on a ½-ounce dart head to make sure I could get a limit,” he said. “After weighing only four fish on the 2nd day, I felt pretty bad and I knew that I had to adjust for Day Three. I wanted to be on the safe side and protect my lead. I knew that there were guys fishing for largemouth and I could be caught with a guy that weighed in a couple of them.”

Four of his final five fish ate the dart head offering, while he culled one with his topwater selection.

“Actually, the topwater bite wasn’t that good in the morning,” he said. “I needed to have the sun get up a little bit and develop some shade lines for the fish to really position themselves for that. That last day, it took me until about 10:30 a.m. to get a limit. I felt pretty confident then and picked up the topwater for the rest of the day.”

Smith’s considering putting winnings towards a house as well as the possibility of a national tour in the future; although his time line for that has not yet been established.

He thanked his family and friends for the support that gets him through the event in addition to his sponsors.

“Evinrude, Dobyns, Buck-N-Bass, Angler Assets, Marine Unlimited and Strike King – they all help me out so much,” he said. “It’s not even just in monetary or product. They are really there to support me and the Wild West! Without them and the phenomenal contingency money that is offered, none of this would be possible.”

Deric Benefield, an Oroville local, claimed the championship for the co-anglers with a tournament total of 21.44. 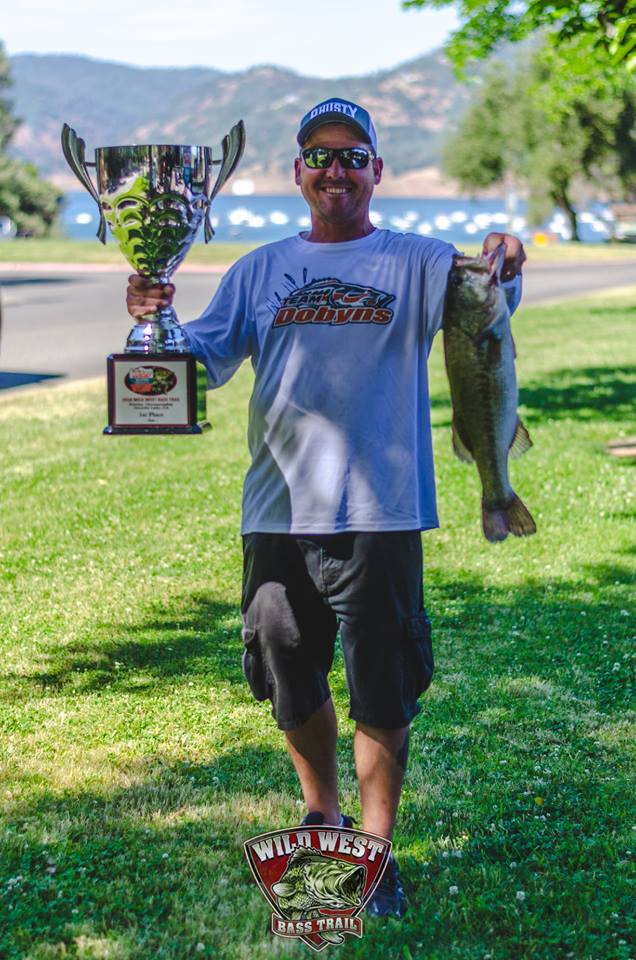 Benefield believes that his home water knowledge increased his success.

“I got lucky with two draws that took me to two great areas that I was already familiar with,” said Benefield. “I was basically doing the same thing as everyone else, catching the same size fish; but on Championship Sunday, I got a five-pounder in the boat and that was what really made the difference.”

He noted that he targeted steep, chunk rock banks and that all of his fish came on a five-inch, green pumpkin Yamamoto Senko.

“I fished Senkos wacky, weightless and wacky, nail-weighted,” he revealed. “I was using a 3/64-ounce weight and nose rigging it. My biggest fish was with the weightless.”

Benefield began his trek into competitive tournament fishing only four years ago. He has fished all three years of the WWBT. He feels a new Ranger could be in his future with the winnings that he banked from the event.

“I’ve learned so much fishing from the back of the boat,” he said. “I am a 10 times better fisherman than I was when I started, thanks to the Wild West.”

Wayne Breazeale of Kelseyville, Calif. was announced as the 2018 WWBT Pro Angler of the Year (AOY)

Benefield banked a total of $26,000, including a Ranger RT188 with a 115 Evinrude and contingency dollars from Yamamoto Baits, Dobyns Rods, Trapper Tackle and P-Line.

REST OF THE BEST | CO

The WWBT debuted in 2016. The trail includes a Pro/Am circuit and two Teams circuits – one based in California and the other in Arizona and the 2018 the Surprise Ford Team Open.