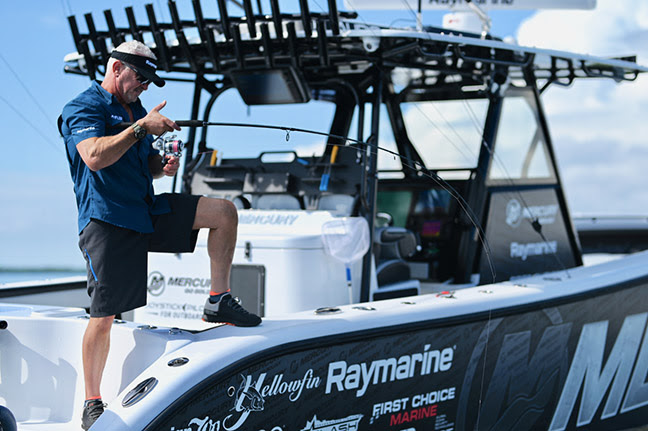 The Caliente Fishing Team has competed in fishing tournaments for over 22 years throughout Florida, the Gulf of Mexico, and up and down the Atlantic Coast. With Captain Arik Bergerman as a stable fixture at the helm, the team has included many incredible fishermen over the years.

“Fishing is a passion, and when you start winning, you start to search for the best people and the best equipment. You need to be fast and you need to use your time – the little time you have – with efficiency,” says Captain Arik.

Efficiency is something Bergerman’s current Caliente team is certainly built for, including Captain Randy Keys, Danny Hamilton, Dominic Molfettas and Anthony Cellamare. Within this group of five, there are National Champions, King of the Beach winners, Junior Champions, Pro Series winners and Senior Champions. Among its many accomplishments, Caliente is the only team to ever win two major professional Southern Kingfish Association (SKA) events back to back in the same year.

“The incredible fishing machine we run is a 39-foot Yellowfin powered by reliable quad 400 Mercury Marine Verados. The electronics and navigation systems are the latest technology from Raymarine and FLIR,” says Bergerman. “We do 24 tournaments a year and it’s important to have great equipment with you. The combination of Raymarine and FLIR is perfect and has definitely contributed to our record of success.”

Team Caliente’s new Yellowfin relies on four Raymarine Axiom series multifunction displays (MFDs) to display the critical information that helps with safe navigation and catching fish. “We run an Axiom XL 24 at the helm, along with an Axiom Pro 12 and an Axiom Pro 9,” says Bergerman, who uses these units to display not only sonar and radar information, but also real-time video from four Raymarine CAM220 IP marine cameras and a FLIR M232 thermal camera.

“We can call up the views from any of these cameras on any Axiom screen and overlay AIS information in ClearCruise AR to immediately tell us what buoys or vessels we are looking at. The combination allows us to run with greatly increased safety day or night, and the view on the big Axiom XL 24 is like looking into a window at night,” says Captain Arik, whose setup includes an additional Axiom Pro 16 mounted overhead and facing the cockpit, so the crew can easily see what’s happening around and below the vessel at any given second.

We have an opportunity to compete and make some money, but it’s most important to enjoy yourself and be safe on the water,” Bergerman says. “And maybe show off your boat a little, too,” he adds with a wink.