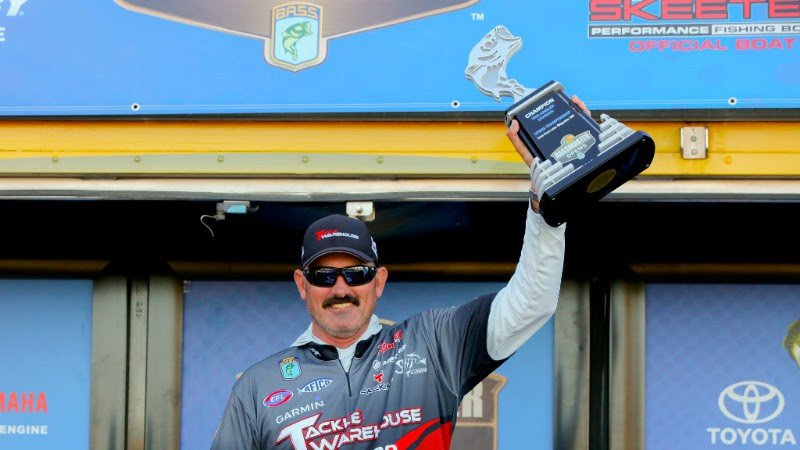 SPRINGFIELD, Mo. — Dialing into the details was the ticket to victory for Jared Lintner, winner of the 2018 Bass Pro Shops Bassmaster Opens Championship on Table Rock Lake.

Linter of Arroyo Grande, Calif., added 10 pounds, 15 ounces of bass today to push his winning total weight to 37 pounds for three days of fishing. Brandon Lester of Fayetteville, Tenn., took second \with 34-11, and Derek Hudnall of Baton Rouge, La., was third with 34-1. Bobby Lane Jr. of Lakeland, Fla., was fourth with 32-7, and Scott Suggs of Alexander, Ark., took fifth with 32-3.

Weather was a key factor throughout the three-day tournament. A chilly rain on Friday was braced by sunny, unseasonably warm weather on Thursday and Saturday. The best fishing occurred during the worst weather, when the bass were most active in the low-light conditions.

Everyone, especially including Lintner, knew the bass were in the fall transition, moving from deep to shallow water.

“I knew the bass were moving shallow, just not enough to put together a reliable pattern,” he said.

“It started replicating itself so I went searching for similar areas,” he explained.

The steep dropoffs near shorelines where Lintner initially discovered the pattern were a 45-mile run from the launch site. Table Rock is a big lake, and Lintner decided to search nearer the weigh-in site. After two days, he found enough of the steep transition areas to complete a pattern. Lintner could spend more time fishing, allowing the continually moving bass to come to him.

On Thursday, Lintner moved into fourth place with 12-14, a respectable catch compared to the rest of the field. The next day, rain and overcast skies made the bite better, producing a limit weighing 13-3.

Today, the sun came out and the post-frontal funk set in. Lintner caught his limit by 8:30 a.m. The sun grew brighter, the wind went calm and the bite shut down.

“The low light compensated for the lack of wind, which made the pattern really click,” he said. “Without wind, the fish could see lures from farther away in the clearer water.”

By midday the wind picked up but the bite did not for Lintner. That made the early morning bite the saving grace for the Californian.

Lintner alternated between a Spro Mike McClelland RkCrawler 55 crankbait, and a Jackall MC/60. He also used a 3/4-ounce jig with a Strike King Rage Bug. He flipped the latter setup when encountering isolated cedar trees near the transition areas.

Lester used a technique that is popular on his native middle Tennessee bass fisheries during the wintertime. Called tight lining, it involves methodically fishing a lightweight jig across deepwater structure. Very little movement is necessary to make the fish bite.

“I found bass at the ends of bluffs but couldn’t make them bite anything,” he said. “I thought of tight lining and it worked.”

Lester used a 3.75-inch X Zone Lures Shiver Shad on a 1/8-ounce jighead for his tight-lining rig fished on 10-pound braid with a 6-pound test leader.

He further dialed into the pattern by finding bass staging where deep bluffs transitioned into other forms of structure, such as rocky points or gravel shorelines.

The Opens Championship was the climax of a year featuring eight events in as many states. The Top 28 pro and co-anglers in the point standings from the Central and Eastern divisions qualified for the championship.

Lintner and the Top 3 pro anglers in points from each division were invited to bass fishing’s premier event, the 2019 Bassmaster Classic presented by DICK’S Sporting Goods. Frank Talley, Brad Whatley and Derek Hudnall advanced from the Central Division, while Brandon Lester, Bobby Lane Jr., and Garrett Paquette qualified from the Eastern Division. The Classic is set for March 15-17 in Knoxville, Tenn. Lester won the Eastern points title, while Frank Talley of Temple, Texas, won the Central title.

Lane earned the Power-Pole Captain’s Cash Award of $500 on the pro side for being the highest-placing angler who is registered and eligible and uses client-approved product on his boat.