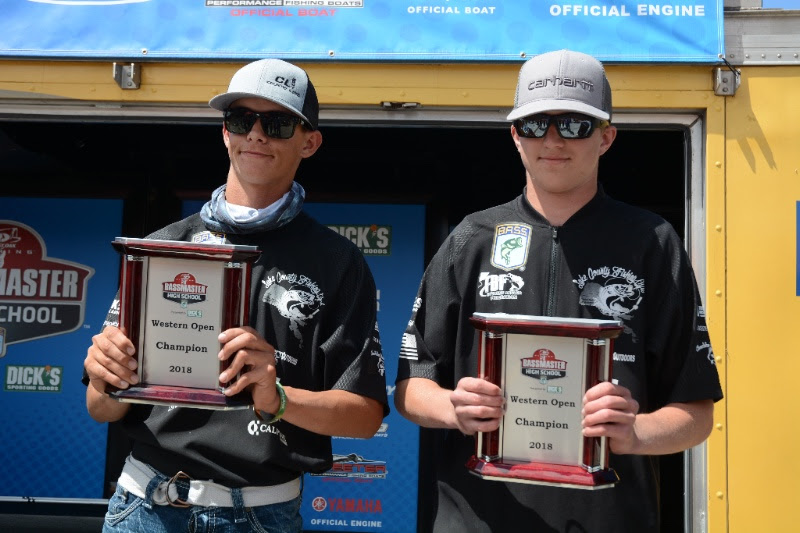 Photo by Craig Lamb/B.A.S.S.
LAKEPORT, Calif. — A common baitfish, not a secret lure, was a key to winning for Cooper Goff and Sheldon Reese on Clear Lake at the Mossy Oak Bassmaster High School Western Open presented by DICK’S Sporting Goods.

The local Kelseyville Knights team tapped into a school of Clear Lake hitch to load their livewell with a limit of largemouth weighing 19 pounds, 12 ounces. Jonathon Milburn and Niko Romero of Arizona B.A.S.S. Nation High School were second with 17-11. Taj White and Derek Richards, also from Arizona, took third with 16-13. Quinn Hawkinson and Conner Urling were fourth with 16-1. Fifth place went to JC Lintner and Austin Bricker of Arroyo Grande High School with 15-4.

Found only in northern California’s Clear Lake and its tributaries, the native baitfish is important forage in the upper food chain, and particularly for largemouth bass. The postspawn bass were hungry and seeking food after the spawning cycle on the lake. The team discovered the winning area during a surface feeding frenzy.

“The bass had the hitch all herded up on the deep side of a shallow ledge,” said Reese, 17, a junior at Clear Lake High School.

The winning area featured a high spot of 3 feet and then dropped to a depth of 6 feet on the bottom, which also was covered in submerged aquatic grass. The anglers believed the bass used the grass as ambush cover until the baitfish approached from above.

The action began immediately and stayed hot until the required halftime break at 9:45 a.m. (PDT). By then, 17 pounds of largemouth were already in the team’s livewell. Following the break, the action picked right back up, with the team slowly culling their weight up to nearly 20 pounds.

The team used a variety of lures capable of covering the water column from top to bottom. Cooper and Reese alternated lures to prevent the bass from growing accustomed to seeing the same bait.

A 1/2-ounce G Money bladed jig did the trick early. The team switched to a Heddon Zara Spook and topwater frog later that morning.  A Texas-rigged, weightless Yamamoto Senko was added to the lure arsenal later in the day.

“We just started hammering them early on the bladed jig,” said Goff, 16, a sophomore at Kelseyville High School. “It didn’t slow down until we had to stop for the halftime break.”

Reese, whose father Jimmy was boat captain, said the anglers pinpointed the deep side of the ledge as most productive.

“The bass were coming up from the deep end to get after the hitch on the shallow side,” he explained.

The teams competed under clearing skies and cool temperatures during a postspawn scenario at Clear Lake. The largemouth were beginning to migrate from shallow water spawning areas to deeper water for the summer.

Teams from Arizona, California and even Alabama competed with the same goal in mind. That was qualifying for the 2018 Mossy Oak Fishing Bassmaster High School Series Championship presented by DICK’S Sporting Goods. The championship will be held on Kentucky Lake, at Paris, Tenn., Aug. 2-4.

Advancing to the championship are Reese and Goff of the Kelseyville Knights and Romero and Milburn of Arizona B.A.S.S. Nation High School.