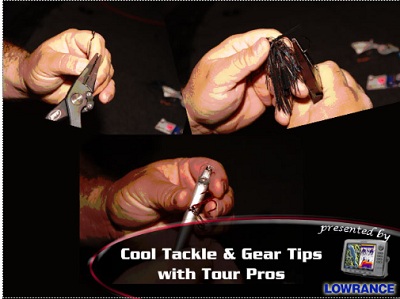 When a person makes a living at something; anything, they inevitably learn a series of tricks and tips that make their job easier. The auto mechanic quickly learns how to take a car apart, make the repairs and reassemble the removed parts. The contractor learns workarounds to repair things on a house that make him faster. The housecleaner learns time saving techniques that makes them faster and more efficient and the list goes on.

The same thing goes for professional anglers. Not only do they learn all of the nuances of lures, the ins and outs of bass behavior and their way around the launch ramp; but, they also learn and develop unique things that make their day more efficient.


In working with the pros on articles, we come across these kinds of tips from time to time and when we get enough of them, we share them with you in a collection type article. Some of these tips are for equipment, some of them for lure and terminal modifications, and some for boating ease.
All of them are things that can make a fishing day more enjoyable, and more efficient.

Mike McClelland - Weighting Jerkbaits
One of the more tinkered with lures in bass fishing is the jerkbait. Sometimes the fish want them slowly sinking, others, slowly floating, quickly sinking, quickly floating or suspending in the water column. While anglers can spend hours drilling, weighting, epoxying and refinishing jerkbaits, Bella Vista,
Ark. pro Mike McClelland has an easier way.


Because lure buoyancy is largely dictated by the water temperature, a jerkbait that suspends perfectly at 50 degrees will sink at 60 degrees. So, rather than making permanent modifications and carrying specific boxes for each temperature range, McClelland uses hook size and split rings to adjust the sink or suspend rate of his SPRO McStick jerkbaits. By upsizing his hooks, and by adding a second split ring on the lure hangers, McClelland can adjust the way the lure floats, sinks or suspends in the water on the fly. All of that, and he doesn't damage the factory finish with lead tape of drilling.

Kevin VanDam
Knowing how deep a crankbait will run can help an angler catch more bass, and VanDam has it all figured out for each of his go to plugs. His experience - from his own personal tests with 6XD crankbaits and his Bass Pro Shops XPS Fluorocarbon - tells him what the differences in depth between his three main line tests are.

Shin Fukae - Sinking Braided Line
Many of the pros - especially those with a passion for finesse fishing - have gone to using a light braided line, like a 15 or 20-pound-test braid tied with a 12 to 15 foot leader of 6 to 8-pound test fluorocarbon. The combination provides exceptional feel and increased hooksetting ability because of the low stretch.

However, the application really excels to depths of 15 to 20 feet. The reason is that because braided line floats, it creates a parachute effect in deeper water that keeps anglers from being directly in contact with their lure.
Fukae, combats that issue by using a hi-vis yellow sinking braided line by YGK from Japan. He ties on a leader of the YGK fluorocarbon and increases the contact with finesse applications, even while in deep water.

Matt Allen - Braid with Leaders for Big Baits
Trophy Hunter Matt Allen, from Vacaville, Calif. has caught dozens of bass over 10 pounds with swimbaits and swim jigs, is also a huge fan of braided line with a leader. While anglers are using a lot of braid to fluorocarbon setups, Allen uses a monofilament leader for shock absorption with the giant bass he is chasing.

He has found one problem with the leaders when casting heavy lures, and that has to do with casting the knot through the line guide of his reels. If the leader is tied long enough to have the knot positioned inside the reel on the cast, the knot will be momentarily stopped by the line guide on the reel, and the weight of the lure will stretch the leader by the knot and cause breakage during a cast or a battle. This can not only result in the loss of an expensive swimbait, but it could also result in breaking off a large fish.

Allen recommends using the length of your rod as a guide and tying a leader length that will make sure the knot is outside of the line guide on the cast. If you are using an eight-foot rod, tying a seven-foot leader will ensure that you will have less chance of stressing the splice on a cast.

Aaron Martens - Clean Rods Perform Better
A notorious tackle tinkerer, Leeds, Ala. pro Aaron Martens has discovered that clean rods weigh less, and cast better. Martens routinely cleans his rods throughout the season; including detailing the guides to make sure they have no grit or grime built up on them.

The clean guides help him get peak castability from his rods and reels, and, because he actually applies a light coating of a polish wax when cleaning, they actually shed water from lure retrieval and during rainstorms. He said that keeping the water from building up keeps his rods feeling light and sensitive while he is on the water. Along with that, they last longer too.


Skeet Reese - Launching Solo
Typically one of the first anglers on the water at each event, Reese has learned an easy way to launch his Stratos Elite 210 by himself without having to use ropes to control the launch.

Reese backs his boat down the ramp with the dock positioned closely along the driver's side of his truck (the port side of his boat) and while guiding his trailer into the water, he slightly turns the trailer so that his vessel is close enough to the dock so that he can easily step from the dock to the boat. Just before the boat is reaching the place where it begins to float, he slightly angles the trailer so that the back corner of the boat will touch the dock gently once it floats.

He then nudges the trailer to allow the bow to slip down between the bunks, with the feel remaining in contact gently, with the boat floating most of the way. He can then casually exit his truck, start his Mercury, put it in gear and back the boat off of the trailer the remainder of the way next to the dock, lower his Power Poles, or tie up to the dock, and he can go park his truck.

Ish Monroe - Label the Fuse Box
Each time Monroe rigs his new Ranger / Yamaha for the season, the Hughson, Calif. pro uses masking tape, or a label maker and marks which fuse runs each of the different components of his Lowrance fishing system in the boat.

He labels his Bow HDS 10 and HDS5 with HD10B and HD5B to designate the bow units, his dash units as HDS10C and HDS5C for the console, his Sonic Hub as SH, and his Structure Scan module as SS. That way, if one of the fuses pops during the day, he can quickly change out the fuse associated with unit without having to search for the right one. This helps save time when each of the fuses are the same amperage and color.


Several Pros - Tweak the EWG Hook for better Hookset
The extra wide gap style hooks are very popular, but because they have such a large gap, they can often roll over when a fish bites and exit the mouth on a hookset without touching any flesh. Several pros have learned that you can use a pair of needle nose pliers, and grip the hook point from the back of the point along the shank of the hook, and tweak it a few degrees to the side.

If you only tweak the point a degree or two, the strength of the hook is not compromised, and the point is then directed into the fishes' mouth on the hookset. This little tweak can increase hook to land ratio when using large soft plastic baits and large EWG style hooks.

Dee Thomas - Open Jig Hook Gaps for better Hookups
Dee Thomas, the inventor of the Flippin' technique, loves to Flip a jig. His favorite jig has a short shank hook so that the lure presents a compact profile. While he uses a 4/0 Flippin' hook in his jigs most of the time, he uses a pair of needle nose pliers to open the gap slightly.


Instead of grabbing the hook near the barb and pulling; which is difficult to do, and could damage the hook - rendering the jig useless, Thomas squeezes instead. He places the flat of the pliers across the bottom of the shank of the round bend of the hook, and squeezes. The hook point opens two or three degrees, and Thomas gets more positive hooksets and lands more bass