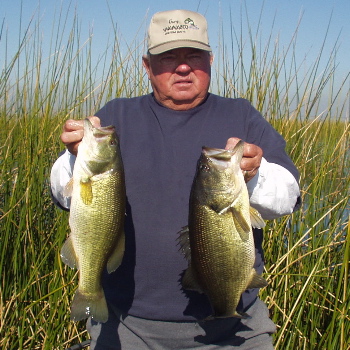 Dee Thomas is undoubtedly the most celebrated bass angler from the west coast and he stands tall among the legends of the sport. In 1975, Thomas traveled east to test his skill in the big B.A.S.S. Invitationals. He won the event at Bull Shoals with a revolutionary new technique he called “flippin”. His special fishing method changed the entire sport. Thomas quickly became known as the “Father of Flippin”.

Today, every bass boat made incorporates a flippin deck. And, every successful touring pro carried an assortment of flippin sticks. When Dee returned to California, he taught his friend Dave Gliebe this skill. Gliebe used his new talent to win two BASS Masters Invitationals the next year. Flippin was here to stay!

Dee worked closely with Dave Myers of Fenwick Rods to perfect the first ever flippin stick. Today, all rod manufacturers offer an assortment of “flippin sticks”. Most of them are little changed from Thomas’ original design.

As a young man, Dee Thomas made the tough decision to stay out west with his family instead of chasing the big BASS circuit in the east. He dominated the Western Bass circuit, winning 13 western tour events, Angler of the Year three times and he qualified for the first ten TOC’s (a record). He won their TOC’s at Pine Flat and Lake Havasu. When West Coast Bass and WON Bass became the dominant western circuits, Thomas won several West Coast Bass Pro-Ams and two of their “West Coast Bass Classics” in back to back years. He was Angler of the Year with West Coast Bass. In ten of WON’s US Opens on Lake Mead, he placed in the money seven times. Dee has over 30 wins as a pro and over 100 money finishes. He’s still at it! At age 68, he won a National Bass Association tournament on his beloved California Delta with the staggering weight of 41.78 pounds for seven fish!

When Dee is asked, “What is your most important accomplishment in bass fishing?” He does not hesitate to answer, “I am proud to have taught lots and lots of people how to fish. If I leave any legacy, I hope it’ll be a bunch of folks who love fishing and who take the time to share it with others, especially kids.”