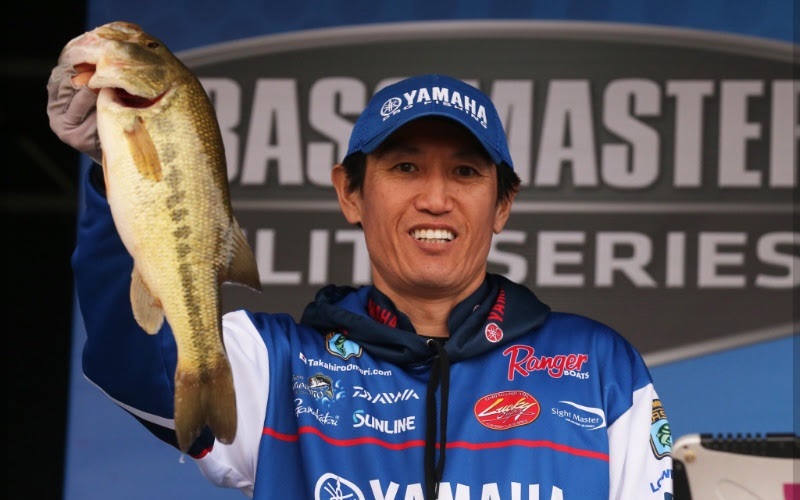 Takahiro Omori of Emory, Texas, takes the lead on the second day of the 2018 Bassmaster Elite at Lake Martin presented by Econo Lodge out of Alexander City, Ala., with a two-day total weight of 32 pounds, 11 ounces.

ALEXANDER CITY, Ala. — Since the Bassmaster Tournament Trail hasn’t visited Lake Martin for a major event in more than 15 years, the belief coming into this week’s Bassmaster Elite at Lake Martin presented by Econo Lodge was that veteran local anglers with recent experience on the fishery had a chance to dominate.

But after two days, the top of the leaderboard includes a guy from Japan, a rookie from Arizona and a longtime pro from Washington State.

So much for local domination.

Takahiro Omori, a Japanese angler who now lives Texas, caught 14 pounds, 9 ounces and jumped from second place into the lead with a two-day weight of 32-11. He’s followed by newcomer Roy Hawk of Arizona (28-12), who is fishing his first-ever Elite Series event, and Washington angler Luke Clausen, who joined the Elite Series last year after a long and successful career on the FLW Tour.

Omori said most of his fish came early — and from one magical spot.

“I don’t want to tell anybody about that spot because I’ve got to go back tomorrow,” Omori said. “It’s a really good spot, but it’s about all I have.”

In the interest of saving fish for the final two days of the tournament, Omori left his best area well before lunchtime and went looking for something else similar.

“After I left that spot, I started practicing,” Omori said. “I tried to find another place to fish, and I couldn’t find it.

“I still have to be open-minded because this time of the year, anything can happen.”

Despite heavy rains in the forecast for the next two days, Omori said he believes the spot will still be good.

“We had a pretty good rain Sunday night and then another one Wednesday night,” he said. “So, the spot should be okay.”

Omori’s lead over Hawk is nearly 4 pounds, but Hawk came on strong during Friday’s second round with a catch of 17-1. Unlike many anglers who weighed in mostly spotted bass, Hawk weighed in four largemouth and only one spot.

“I don’t know if what I did today is repeatable,” Hawk said. “But I think I can catch some fish, and I’m having a lot of fun doing it.

“I’m moving around a lot, and as I’m going along the bank, I’m kind of targeting different things. A lot of the key largemouth are coming on specific things, but I’m catching spots in between.”

Hawk’s catch was anchored by a largemouth that weighed 5-2, and he already had a 3 1/2-pounder in his livewell when that fish bit.

Clausen caught the bulk of his fish during the afternoon hours and jumped from 16th place on Day 1 into third with a Day 2 catch of 15-4.

“It’s been kind of slow for me in the mornings,” he said. “I don’t think I’ve had a limit before 10 o’clock either day. Then in the afternoons, it gets right. I’ve had some flurries in the afternoons when you catch them every cast for five to seven casts.”

Clausen has weighed all spotted bass the first two days — and since spots can be unpredictable in overcast conditions, the weather forecast has him wondering how things will go the rest of the way.

“That’s the scary thing about spots,” he said. “I have to say I would much rather have sun than I would overcast because spots have a tendency to roam a lot more in that. So, I don’t know if I’ll be able to target them as well.”

Only the Top 51 remaining anglers will take part in Saturday’s semifinal round, and only the Top 12 after Saturday will advance to Championship Sunday with a chance to win the $100,000 first-place prize.

Daily takeoffs will be held at 6:15 a.m. CT from Wind Creek State Park with weigh-ins scheduled back at the park for 2:40 p.m.

The Alexander City Chamber of Commerce is hosting the event.